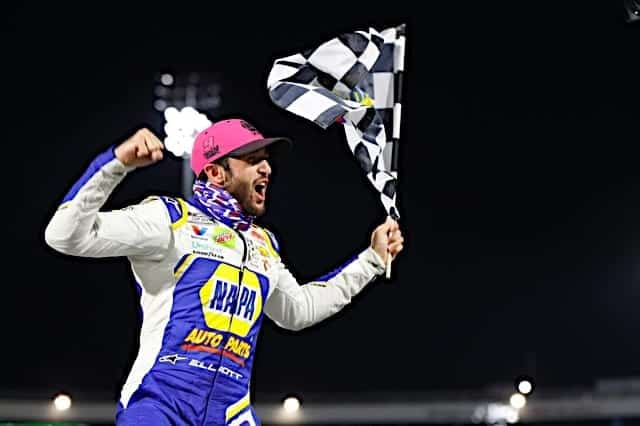 Chase Elliott will lead the NASCAR Cup Series field to green in the race for the championship at Phoenix Raceway.

The No. 9 Hendrick Motorsports driver earned the pole after winning last week’s event at Martinsville Speedway.

March’s Phoenix victor Joey Logano will start next to Elliott on the front row, while his Team Penske cohort Brad Keselowski lines up third. Denny Hamlin, the last of the championship contenders, starts fourth, while Ryan Blaney rounds out the top five starters.

You bet they do – and for good reason ($$). I’d also say the vast majority of fans (who are not Kes, Logano, or Denny fans) do as well.

There’s really no reason not to like the guy. He appears to be talented and humble (like his dad), and he hasn’t made any real enemies on the track. And he’s the son of a popular Hall of Fame driver.

I like the guy. He’s a very good driver.

I think NASCAR would go a long way to establish legitimacy if they would actually publicly disclose the rulebook at the beginning of each season. Since they refuse to do this, it increases distrust and fosters conspiracy theory. Many would not have decided rescinding the pit-stop penalty was playing favorites if they were familiar with the rule (or could go look it up themselves). But I’d say declaring “everybody” unable to read and comprehend might be a bit of an overstatement. And while the current qual rules don’t favor any “one” driver, they certainly favor a small group of drivers and lessen the legitimacy of the race. Simple – either qualify on track, or random selection for the whole field.. (or get rid of all other cars not in the “playoffs”). Why on earth would a sponsor want to pay for any of the last 10 races knowing that their car had no chance to compete fairly or even be shown or discussed on TV if they are no longer in the “playoffs”? Really, really, really dumb business model.

Elliott “inherits” the pole since he is the heir apparent.