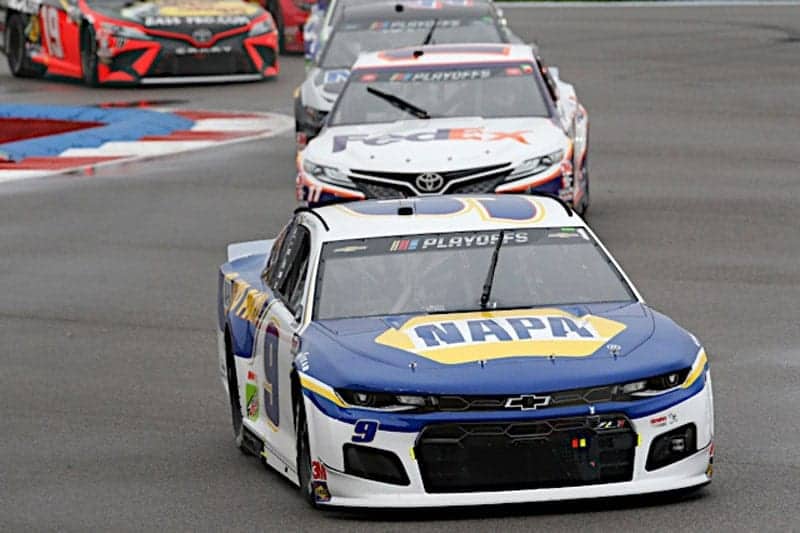 After a season that featured a stoppage due to a global pandemic, way too many rain delays, a frightening crash and more oddities and bizarre moments, the NASCAR Cup Series has finally arrived at the precipice of the offseason.

All that chaos has led to championship weekend, which, appropriate for the whirlwind that 2020 has been, will be taking place on the heels of the U.S. presidential election, which has already taken several days to decide.

Sunday (Nov. 8) is the division’s last date for the 2020 season, the field heading to Phoenix Raceway for the first-ever season finale at the track. Four drivers — Denny Hamlin, Chase Elliott, Brad Keselowski and Joey Logano — will duel in the desert for the Cup crown.

Missing from this quartet of contenders is Kevin Harvick, who won nine races in 2020 but was eliminated after a series of unfortunate events in the Round of 8.

Hamlin and Elliott are still searching for their first crown, the former in his 16th season of competition. Keselowski and Logano both have one title under their belts, Keselowski in 2012 and Logano in 2018.

Each manufacturer will be represented by at least one championship-eligible driver, and Joe Gibbs Racing has a chance to go back-to-back with Hamlin after teammate Kyle Busch won in 2019.

The dynamic should be interesting, too; in 2019, three Joe Gibbs Racing drivers went up against Harvick for the title. For 2020, the contenders consist of two Team Penske drivers, one Hendrick Motorsports staple and just one JGR entry.

Hamlin has the most wins this season (seven) among his fellow title contenders. The past few days have seemingly mirrored his 2019 campaign: in the penultimate race at Phoenix, Hamlin came in clutch and secured a spot in the final round in a must-win situation. That victory should give the No. 11 team confidence for this season, especially since he was clutch enough last week at Martinsville Speedway to squeak into the final round by a few points.

Unfortunately for the Virginia native, if 2020 continues to mirror 2019, he will fall short in the finale. At the same time, though, Phoenix is an entirely different animal from Homestead-Miami Speedway (the former finale location), and it’s entirely possible Hamlin could lock up his first career championship after coming so close in 2010 and 2019.

Hamlin has outdone what is arguably the best season of his career (2010) in all categories except wins, which he could match if he emerges victorious on Sunday evening. With 20 top-10 finishes and nearly as many top-five efforts, Hamlin is averaging a finish of 9.5, and that consistency will be key heading into the finale.

For historical reference, Hamlin has won twice at Phoenix; the aforementioned 2019 win along with a victory in the spring 2012 race. Hamlin ended up a dismal 20th there in the spring but has three top-five efforts there in his past five starts.

The lone Chevrolet driver with a shot at a title is also NASCAR’s Most Popular Driver. Elliott secured four wins in 2020 but was still 25 points below the cutline as the haulers headed to Martinsville. Tied with his Hendrick Motorsports teammate Alex Bowman at the start of the race, Elliott led 236 laps — nearly half the event — and won the race by six-and-a-half seconds.

Elliott’s expertise on road courses, having won the last four events on those tracks, seemed to favor him at Martinsville. Phoenix is a far cry from Martinsville in layout, but he has five top-10 finishes there in nine career starts.

It’s also worth noting, though it’s unlikely to surface this weekend, that Elliott has a history with Hamlin at Phoenix. After Hamlin moved Elliott out of the way at Martinsville in 2017, effectively ending Elliott’s title chances, Elliott returned the favor at Phoenix. But the pair has not had issues since, and it’s highly unlikely that either would jeopardize their shot at a title.

Elliott started on the pole at Phoenix in spring of this year, finishing seventh, but will need a huge boost to launch him to his first championship.

Like Elliott, Keselowski scored four wins this year. Both drivers also won at Charlotte Motor Speedway and at Bristol Motor Speedway, although Elliott’s win there was during the All-Star Race. Keselowski’s year has been relatively quiet,

Keselowski has the most top-10 finishes of any of the Championship 4 in 2020, but he also has the longest stretch without a win heading to Phoenix. Each of the other three drivers won at least one race in October, while Keselowski last went to victory lane at Richmond in early September.

Despite four straight starts after that where Keselowski finished outside the top 10, he reeled off three straight top-six finishes in the Round of 8 to sneak his way into the finale.

The biggest factor standing in Keselowski’s way is that he has never won at Phoenix, even with 22 starts under his belt there. With just six top-five efforts there, it’s a track that hasn’t been kind to the longtime Penske driver; he ended up second in fall 2018 but hasn’t finished better than 10th in the three races since.

Logano may or may not be the gut favorite heading into Phoenix, since he won at the track in the spring and has already been locked into the final round for three weeks.

The No. 22’s 2018 championship effort was a subdued one; after just two wins heading to Homestead, Logano was set to go up against that year’s Big 3 of Harvick, Kyle Busch and Martin Truex Jr. Despite that trio having 18 wins between them, or half the season’s victories, Logano held off the three contenders to win the race and championship. (For what it’s worth, the four drivers finished 1-2-3-4, the only time that has happened since the bracket format of the playoffs began).

Logano won Kansas Speedway after a very uneventful summer and fall; he won Las Vegas Motor Speedway in February and Phoenix in March but went nearly seven-and-a-half months (29 races) before he visited the winner’s circle again.

While there’s certainly logic in both considering Logano a favorite or counting him out entirely, his chances might fall more in the middle; with 2018 in mind, the No. 22 team could easily be a non-factor or go win the race outright.

If analyzed from a purely statistical standpoint, spanning nine events — from the first race at Phoenix all four drivers were in together (March 2016) to present — Logano has won two races, Hamlin one and the other drivers zero.

Hamlin, however, has the best average finish across those nine races, with a 10.9 mark. None of the other drivers averaged above 13th.

Hamlin and Keselowski ended the spring race outside of the top 10, while Logano won and Elliott finished seventh. Both Keselowski and Elliott, however, each led at least 80 laps, Logano just 60. Hamlin did not lead a lap in the spring.

All things considered, I’m taking Hamlin to secure his first championship in one of his career’s best seasons. The No. 11 team came in clutch in the desert last year and could very well do the same with more on the line in 2020, finally removing Hamlin’s name from the list of best drivers without a title.

After what NASCAR pulled last week at Martinsville, The championship weekend is now nothing but a joke. Allowing Hamlin in after the way Joe Gibbs cheated NASCAR has lost it’s credibility

“Cup Championship weekend?” There’s no practice, no qualifying, and a gifted pole position. That’s not a race weekend.