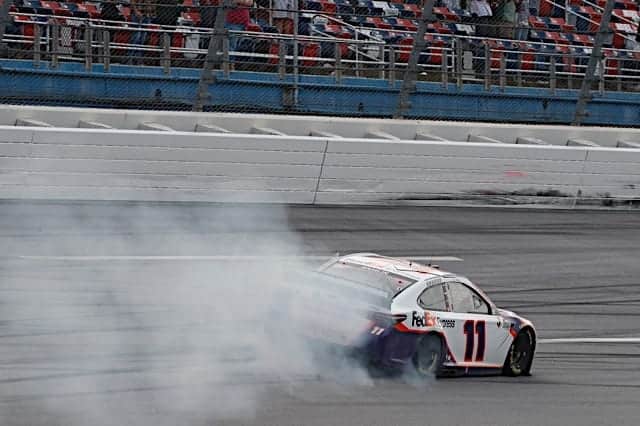 We’ve seen this story before. But could this edition have a happier ending?

While most have struggled through this difficult 2020, Denny Hamlin has enjoyed what might be the best season of his NASCAR Cup Series career. The Virginian has matched his career-best 9.5 average finish from last year, sits one win away from matching his personal best win total of eight from 2010 and has even thrown two victories in the short-lived eNASCAR iRacing Pro Invitational Series into the mix.

That year-long success has made Hamlin one of the top stories of the NASCAR garage area this season, from start to finish.

He won his third Daytona 500 in quiet fashion to kick off the year as all eyes shifted to Ryan Newman after he suffered a horrible crash behind Hamlin. The victory placed Hamlin’s name further into Daytona International Speedway lore, making him just the sixth driver with three wins in the event and fourth person to win back-to-back editions of the Great American Race.

When the pandemic halted real racing, Hamlin overtook fan-favorite Dale Earnhardt Jr. on the final turn to win the first virtual race at Homestead-Miami Speedway. He went winless for a short stretch after that but still trended after his daughter Taylor turned his monitor off mid-race during an iRacing event at Talladega Superspeedway. He eventually bookended the tour, also claiming the finale at virtual North Wilkesboro Speedway in the track’s first showcase on iRacing.

Hamlin was quick to reestablish himself as both a contender and a meme when real-life racing returned, sporting a hilarious smiling face mask as he won a rain-shortened race at Darlington Raceway days after NASCAR’s return. He later added a redemptive win at Homestead-Miami Speedway after losing the title race there months before.

The summer months saw Hamlin and Kevin Harvick trade off wins, with Hamlin claiming Kansas Speedway, Pocono Raceway and even a surprising win at his self-proclaimed worst track in Dover International Speedway. Hamlin entered the playoffs as a title favorite as a result, then threw in another solid (if controversial) victory at Talladega Superspeedway while quietly maneuvering himself through the opening three rounds.

That has placed Hamlin into the Championship 4 with a strong shot at a title. He’ll compete at the same Phoenix Raceway track he won at one year ago to earn a prior title chance. Even better for Hamlin, his season-long rival — Harvick — is out of contention despite a nine-win season after a disastrous Round of 8 saw him barely knocked out.

Oh, and along the way he’s also announced plans to enter into the realm of team ownership alongside basketball great Michael Jordan. Yes, that one. MJ. His Airness. The GOAT.

All told, it’s been a pretty good year to be Hamlin. He has a chance to cap it off with a championship and make this arguably the most important season of his career.

But that’s where things get tricky. Hamlin has been in this position multiple times before and come away empty-handed. He’s smart enough not to make any guarantees that this year will be different, either.

“No guarantees, so I can’t tell you why,” Hamlin said when asked what would make 2020’s outcome different from the past. “But I’ll let you know after the race is over why we won. But it’s going to take execution and a fast car. Those are the two things that you’re going to have to do to win. I think it’s going to… will take a win to win it all.

In 2010 Hamlin seemed to have the title won under the old Chase format when a late surge from Jimmie Johnson allowed him to be overtaken over the final two weeks of the 10-race points battle.

It took the Joe Gibbs Racing star four years to recover, but he managed to mount a run to the Championship 4 in the inaugural year of the elimination playoff in 2014. Sadly for Hamlin it proved to be for naught, with Harvick prevailing at night’s end for his first title.

The ensuing years brought consistent disappointment. Hamlin missed the Championship 4 in each of the next four years, coming as close as running up front in the late stages of the Round of 8 cutoff at Phoenix in 2017 before contact with Chase Elliott gave him a flat tire that resulted in elimination.

Hamlin finally returned to the Championship 4 in 2019 but fell short of victory after a risky decision to add tape to the grille of his No. 11 Toyota resulted in it overheating late in the race.

A Cup championship is the one glaring omission from Hamlin’s impressive NASCAR resume. He has 44 career Cup wins, Daytona 500s, Southern 500s and Bristol Motor Speedway night races among them. But his failure to hoist up the championship trophy at year’s end separates him from title-winning teammates Kyle Busch and Martin Truex Jr.

Hamlin admitted in a mid-week media conference this week that he hasn’t touched a Cup championship trophy at all.

“I’m one of those Stanley Cup guys where I don’t like to touch the trophy before you actually win it, so I’ve never actually touched a NASCAR Cup Series championship trophy,” he said. “I want to be able to touch it.”

He’ll have a strong chance to do so Sunday (Nov. 8), but it won’t be easy. Team Penske has had arguably the best cars with the 750-horsepower rules package being utilized this weekend, which is different from the package Hamlin won with at the same track last fall. That gives teammates Joey Logano and Brad Keselowski a solid shot at securing their second Cup title. Elliott will enter with momentum from his Martinsville Speedway win and also be a difficult out.

There are decent odds that Sunday won’t work out in his favor. But Hamlin’s back in the final race with a chance.

If it works out, perfect. And if it fails? Hamlin will keep playing the odds until he’s lucky enough to put a championship run together.

“From my perspective, I’m a numbers guy, I like the law of averages,” Hamlin said. “If I just keep putting myself in that final four, eventually things will fall my way.”

I sincerely hope not. He is in this final position because his team cheated his way into the final 4 and CRAPCAR chose to look the other way because it involved Gibbs racing. If he wins the championship, he doesn’t deserve it. What a low bar CRAPCAR has set for its champion.

Having this ahem “pandemic” has been the best thing that has happened to his racing career! We shall see what we shall see! I think he is smart(this time) not to talk bullshit, as in the past he talked bullshit and choked big time! Pure and simple.

“All we do is win!” Haven’t heard Denny say that in a while.
What could be bigger than a Bubba win in Phoenix. It has been done by that team before with mediocre drivers.

WHAT???!!!!
Are they expecting rain in Phoenix?

There are so many reasons to cheer against Hamlin. First, there are the team orders which put him into the Final Four. Next is his whining about how only he and Harvick deserved to be fighting for the championship. Then at the time when so many underfunded teams fight to exist, he gets his pal Michael Jordan to finance a Cup team just for Denny. I really hope this arrogant SOB finds a way to lose another championship this weekend.