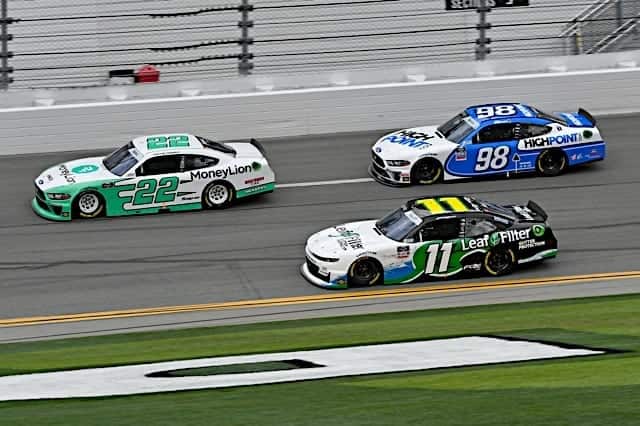 Thirty-two races and 5,383 laps are in the book. Now it’s time to crown the 2020 NASCAR Xfinity Series champion.

For the first time, Phoenix Raceway is host of the championship race. Odds are, the four championship drivers – Austin Cindric, Chase Briscoe, Justin Allgaier and Justin Haley – are going to run towards the front and potentially dominate the race. After all, this quartet of drivers have combined to win 20 of the 32 events this season.

But if we’re being honest, you might as well forget about those 32 races away because it comes down to one race, 200 miles. And if we’ve learned anything this week – take note of the Cup Series race at Martinsville Speedway – the best driver doesn’t always win the title in this playoff format.

So who’s the favorite for the Xfinity title? Let’s break it down by previewing each driver’s chances at Phoenix.

Over the past three seasons, no driver has grown more in the Xfinity Series than Cindric. Remember his rookie campaign in 2018? He shared time between Team Penske and the cursed No. 60 car at Roush Fenway Racing.

In 2019, Cindric took big strides, winning two races and making a push to the Round of 8 in the postseason. This season, though, has been his breakout season: five wins (in a scorching hot six-race summer stretch), 18 top fives and 25 top-10 finishes – all career highs.

In five career starts at Phoenix, Cindric has been competitive, but he hasn’t gotten that first victory at the one-mile track. The 21-year-old has scored two top-five and four top-10 finishes, including an eighth earlier this season, third among Championship 4 drivers.

Cindric’s average finish at Phoenix is 7.8, but it’s going to take more than that to win the title this weekend. His 875 laps led in 2020 ranks third in the series, slightly behind Allgaier and Briscoe. Ultimately, all he needs to do is lead the final circuit at Phoenix, or at least be ahead of the other three drivers running for the title to give Team Penske its first Xfinity driver’s championship since Brad Keselowski did so in 2010.

Prior to the season kicking off at Daytona International Speedway, Briscoe had a lofty goal. He believed he needed to win at least eight races to have a job for the 2021 season. He called his shot, and now he enters the season finale with nine triumphs.

Briscoe impressed Tony Stewart, co-owner of Stewart-Haas Racing, so much that the three-time Cup champion offered the 25-year-old a ride in the No. 14 Cup car next season, replacing Clint Bowyer.

So no matter what happens this weekend at Phoenix, Briscoe has assured himself a ride for 2021. Obviously that’s relieving because he didn’t know until January this year that he’d be returning to Xfinity in 2020.

Nonetheless, Briscoe has the quickest car in the series, winning a series-high nine times. The No. 98 Ford has been inconsistent at times, with just 21 top-10 finishes, down from 26 in his rookie campaign last year. However, he’s spent the most time out front of all drivers with 991 laps led.

Briscoe has admitted that Phoenix is not among his best tracks on the schedule. Statistically, though it’s not a bad track for him. In fact, it’s quite the opposite with an average result of 6.7 in three starts. Expect the No. 98 team to run towards the front on Saturday and have a say in who wins the championship.

With the way Allgaier’s 2020 season began, it would be hard to consider the No. 7 team an odds-on favorite for anything. However, it’s Phoenix, and the Illinois native could probably drive a boat around the sandy desert racetrack and still be competitive.

Allgaier has 60 percent more starts at Phoenix (20) than his three competitors combined (11). And he’s no slouch at the racetrack.

In those 20 starts, Allgaier has two victories, including the fall race last season, which propelling him to the Championship 4. He’s scored five additional top-five efforts with 12 total top-10 finishes, pacing the field for 385 laps (383 coming since he joined JR Motorsports in 2016).

Based on experience and his ability to be competitive at Phoenix, Allgaier should be in a position this weekend to win his first NASCAR championship. But while he’s always fast at the track, there has been inconsistency along the way, including in March, when he led 51 laps but dropped to 13th in the finishing order by not having fresh tires late in the race.

On paper, it’s been a seesaw season for the 34-year-old, as Allgaier has won three races and led a career-high 932 laps. On the flip side, the No. 7 team has just 10 top-five and 18 top-10 efforts, with an average finish of 13.6, the worst average finish of drivers to ever making it to the Xfinity Championship 4 (previous worst was Daniel Hemric in 2017, 13.2).

The No. 11 team has lived by the motto “dark horse” this season. In the playoffs, Haley has lived up that name.

Just looking at Kaulig Racing, most people would have predicted Ross Chastain to be the leading driver at make the Championship 4. And though the No. 10 team was consistent this season, it’s the flagship No. 11 Chevrolet that made it to Phoenix.

The 2020 season was Haley’s breakout year, winning three times – all at superspeedways – and is riding a streak of three straight superspeedway wins, becoming just the third driver in series history to have that feat (Dale Earnhardt and Dale Earnhardt Jr.). The No. 11 car has led 113 laps this year, the third fewest of drivers to ever make it to the championship race in its five-year history (Allgaier’s 34 laps led in 2016 is the fewest).

But compared to his rookie season last year, Haley has made big improvements. Sure, he’s scored the same amount of top 10s (20), but he has 10 top-five finishes, six more than he had in 2019. His average finish is also up nearly two full positions.

At Phoenix, Haley is no layover either. In three starts, the Indiana native has improved each race, most recently finishing fifth in March. In fact, if you base the championship race off March’s results, Haley is your 2020 champion. Unfortunately for Kaulig, that’s not the case. But you can expect another solid performance from Haley on Saturday.

Prior to the season beginning, Allgaier was my pick for the championship. Surely I thought he’d score more than three race wins, and while 2020 is among his worst years statistically (aside from wins and laps led), this seems like it has an Allgaier ring to it, and he finally cashes in during his 10th full-time season. JR Motorsports is stellar in the desert, and all its efforts will be put on the No. 7 car this weekend.

With Allgaier winning, I see the best two drivers this season, Briscoe and Cindric, coming up just short of the win. I don’t think Haley is that far behind either as Kaulig’s short track program (Phoenix really isn’t a short track, but has similar characteristics) is really good. Fortunately for the Nos. 11 and 22 teams, there is always next year.