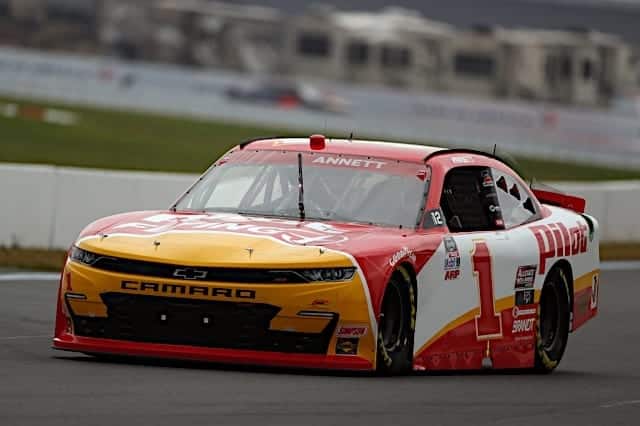 JR Motorsports will keep its stable of full-time drivers together for the 2021 NASCAR Xfinity Series, as Michael Annett will return to the team in the No. 1 Chevrolet, as will his primary sponsor Pilot Flying J, the team announced Nov. 5.

Annett has driven for JR Motorsports since 2017. The 34-year-old will join Noah Gragson and Justin Allgaier as the organization’s full-time drivers.

Additionally, Josh Berry and Sam Mayer will comprise the majority of the races for the team’s fourth entry, currently the No. 8. Team owner Dale Earnhardt Jr. will also compete in one race in that entry. Other drivers for the car have not yet been announced.

“Returning to JR Motorsports with Pilot Flying J means a lot to me,” Annett in a team release. “We’ve been able to grow this program here, with Travis Mack and the team, and I know that more race wins and playoff appearances are in the future. Pilot Flying J has been a great partner for the past 13 seasons and I am looking forward to being here with Dale, Kelley and the JR Motorsports family.”

Annett has made 294 Xfinity starts, with one victory in the 2019 season opener at Daytona International Speedway. He has 17 top fives and 84 top 10s. He earned his career-best finish of fifth in the championship standings in 2012.

Why not mention that my daddy owns Pilot Flying J and TCM TRUCKING who also sponsors the car in some races? Nothing wrong with it, just full disclosure. It was easy for Paul Menard and his daddy to do it since their last name is all over the race car.
What about Jeb Burton and Daniel Hemric, will they get a chance again in the number 8?