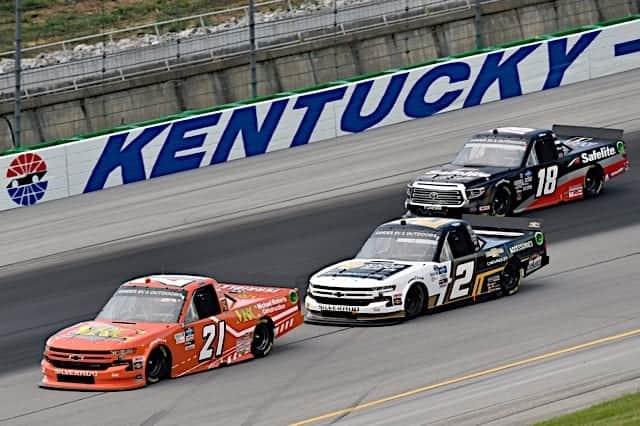 This Friday night (Nov. 6), the Gander RV & Outdoors Truck Series will crown its champion, kicking off the championship weekend at Phoenix Raceway. Despite the lengthy shutdown forced by the COVID-19 pandemic, a lot of determination and creative scheduling has the series back on track to end as scheduled. Four drivers – Sheldon Creed, Grant Enfinger, Brett Moffitt and Zane Smith – will face off head-to-head to determine this year’s champion.

Regular Season: In just his second full-time season in the Truck Series, Creed scored his first career win at Kentucky Speedway and followed it up with a pair of wins at the Daytona International Speedway road course and World Wide Technology Raceway at Gateway. But an up-and-down season saw him score just seven top 10s in the 16 regular season races, though five stage wins helped him enter the playoffs as the top seed.

Playoffs: With 26 playoff points to his name, Creed entered the Round of 10 with a 21-point advantage over Todd Gilliland, who was seeded ninth. Finishes of 11th, second and 12th in that round allowed him to point his way into the Round of 8 and again enter as the top seed with an additional two stage wins and the playoff points that came along with them.

The Round of 8 turned out to be Creed’s strongest three-race stretch throughout the entire season with finishes of second, first and eighth. It was just the second time this year he put together three straight top 10s; he did it with finishes of ninth, 10th and fifth to open the season. The victory at Texas Motor Speedway made Creed the second driver locked into the Championship 4.

Why he’ll win the championship: Creed and crew chief Jeff Stankiewicz have hit on something special this year, leading laps in 16 of 22 races. In fact, oftentimes when Creed got out in front of the field, he’d drive away to an extensive lead. With that combination, look for Creed to try to get in front of the field and build a healthy lead to keep himself out of any potential on-track trouble in hopes of scoring GMS Racing its second championship in five years.

Why he won’t win: With just two starts at Phoenix and finishes of 10th and 12th, Creed’s prior history at the track isn’t going to be enough to win the championship. And though he’s improved tremendously throughout this season, Creed didn’t exactly make many friends on the track during his rookie campaign, and that’s something that could come back to bite him if he needs someone outside the playoffs to cut him a break instead of racing as hard as possible to maintain their position.

Regular Season: Enfinger opened up the season with a victory at Daytona International Speedway. Though it didn’t immediately guarantee a playoff berth for the No. 98 team, a second win at Atlanta Motor Speedway three races later essentially locked him into a spot. A third victory to close out the regular season helped seed Enfinger fourth when the playoffs began.

Playoffs: Finishes of sixth, sixth and 13th in the Round of 10 allowed Enfinger to slide through into the next round on points while Todd Gilliland and Christian Eckes saw themselves eliminated. Heading into the Round of 8, Enfinger was seeded fourth, and a fourth-place run at Kansas Speedway put him in a good position heading into Texas Motor Speedway. But a blown motor put Enfinger in a must-win situation at Martinsville Speedway last weekend, and his fourth win of the 2020 season gave him a spot in the Championship 4.

Why he won’t win: Simply put: Martinsville. Enfinger stopped at nothing to win his way into the Championship 4, and that including body-slamming the competition if they threatened to take the lead away. NASCAR drivers tend to have a crystal-clear memory when it comes to how others race them, so don’t expect anyone in the field to make it easy. And though he’s got back-to-back top fives in his last two visits to Phoenix, I truly believe it’s going to take a race win to win the championship.

Regular Season: In what may have been one of the biggest surprises this year, Moffitt, who won four races last season, didn’t win a single race during the regular season. He did, however, finish runner-up three times. But 11 top 10s, including six straight from Michigan International Speedway to Richmond Raceway, saw Moffitt seeded fifth with five stage wins, matching GMS Racing teammates Creed and Zane Smith for the most in the series.

Playoffs: Moffitt’s Round of 10 was far from horrible with finishes of second, 15th and seventh, including a dominant run at Bristol Motor Speedway where he led 117 laps en route to a runner-up finish. But when the Round of 8 began, Moffitt was already below the cut line before that trio of races were even run. He took any doubt away with a narrow victory over teammate Smith at Kansas Speedway to open the Round of 8 and cruised through to the Championship 4.

Why he’ll win the championship: Moffitt is no stranger to the playoffs and the pressure of trying to win the title. This season marks his third straight in the Championship 4 – and that includes 2018 when he won the season finale and the title. In two starts at Phoenix, Moffitt has a win in the penultimate race of his championship season and finished 10th last year at the track.

Why he won’t win: The No. 23 team hasn’t looked like it’s had quite the speed his teammates have this season. Plus, coming off of a disappointing 28th-place finish after a crash at Martinsville, momentum certainly isn’t on Moffitt’s side.

Regular Season: Three top 10s in the first four races brought rookie Smith into the conversation very early this season, and a crash at Homestead-Miami Speedway marks the only time during the first 10 races he finished outside the top 20. Smith scored his first career win at Michigan International Speedway and backed it up with a second victory at Dover International Speedway two races later. Through 16 races during the regular season, Smith finished inside the top 10 nine times.

Playoffs: Smith’s five stage wins helped him enter the playoffs seeded second in a tie with Austin Hill. An early crash in the final race of the Round of 10 at Talladega Superspeedway looked like it would end Smith’s playoff hopes. However, he managed to squeak through the first round and was seeded third headed into the Round of 8. With two of the Championship 4 spots claimed by his teammates Creed and Moffitt headed into Martinsville, Smith wanted to win to ensure there was no question that he would make the Championship 4. But as the laps wound down and Enfinger showed that he would not be denied the victory, the battle came one of ensuring he finished ahead of Crafton, who was his closest competitor to take the last spot on points. A third-place finish to Crafton’s fifth ensured the rookie got a chance to join two of his teammates and give GMS a 75% chance of winning the title.

Why he’ll win the championship: Though he hasn’t made as many enemies as other rookies have throughout the years, Smith has proven he’s not afraid to be aggressive on the track when he needs to be. And that his victories this season came on two very different tracks proves that Smith is a versatile driver who can win when he’s got the right setup.

Why he won’t win: Simply put, only one rookie (Erik Jones) has won the championship in the Truck Series’ 25-year history. And zero Truck Series experience at Phoenix puts Smith at an immediate disadvantage, though that is something he’s faced for much of the season.