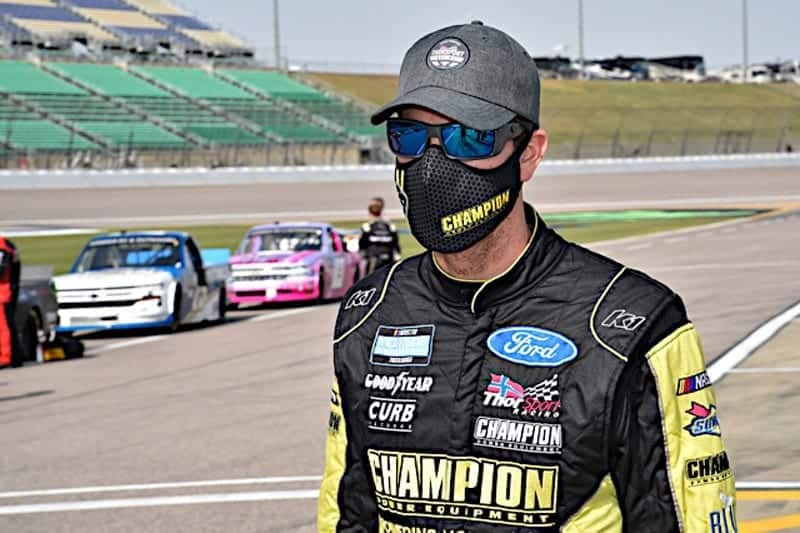 Grant Enfinger won his way into the NASCAR Gander RV & Outdoors Truck Series Championship 4 race via his win in the series most previous race at Martinsville Speedway., but in the Lucas Oil 150 at Phoenix Raceway, Enfinger was fourth best.

Enfinger started the race in first, but he repeatedly said post-race he never fired off well. He finished fourth and fifth in the first two respective stages, lagging behind the other Championship 4 drivers.

While stage points are not awarded to the Championship 4, Enfinger and crew chief Jeff Hensley knew they needed to make a change to beat the three GMS Racing Championship 4 drivers.

When the caution flag flew on lap 105, Hensley decided to have Enfinger bring his No. 98 ThorSport Racing Ford to pit road. As a result, Enfinger got off sequence with his tire strategy compared to championship competitors Sheldon Creed, Brett Moffitt, and Zane Smith.

As the laps wound down, Enfinger was in second, reeling in leader Moffitt. Although there was no guarantee Enfinger would have beaten Moffitt, he benefited from his fresher tires.

Instead, with two laps to go in the race, the caution flag flew, drastically changing the outcome of the race. Enfinger ultimately chose to stay on track, whereas the rest of the Championship 4, along with other lead-lap drivers, came to pit road.

“If no one had taken tires, I likely had a shot,” Enfinger told media members in a post-race Zoom call. “We went back and forth; Hensley wanted to come in, I wanted to stay out. We had trouble firing off on new tires all night. My biggest hope was for us and about 10 trucks to stay out. That wasn’t the case, and that’s where we got beat. We just weren’t great at firing off all night. A bad ending to a great year.”

On the overtime restart, Enfinger wheeled his No. 98, only to seemingly be blocked by Chandler Smith in the No. 51.

“He came upon me,” Enfinger said. “I was at his right rear on my exit. I could’ve hooked him into the wall but that wouldn’t have done me any good either. He’s trying to win the race; I don’t blame him at all. He was pushing the envelope. If I would’ve pushed the envelope, it would’ve wrecked us both.

“End of that day, that didn’t help us, but I don’t know if that necessarily lost us the race. If I could’ve kept it going through there, it would’ve been another 100 yards before Creed would’ve passed us. I don’t think we could’ve held him off.”

On the final lap, Enfinger drove his heart out but made contact with the wall.

“Coming to the green, the way everything cycled out, I knew we had a little buffer behind us,” Enfinger continued. “I was worried about the new tires, but honestly, I was focused on the No. 23 truck, beating him in turn 1. On the first time by, I actually had a pretty good run. Once a truck slid up in front of me, it hurt it a little bit. But then when the No. 2 truck passed us coming to the white flag, I knew then we were done. I knew it probably wouldn’t stick but I drove it in there as hard as I could. Jumped the PJ1 and got into the wall pretty good. A Hail Mary, ’cause second place did us no good; that never worked.”

When the checkered flag flew to end this season, Enfinger finished in 13th, fourth out of the Championship 4.

Incredible fight by @GrantEnfinger tonight. Gave us the very best the @ThorSportRacing group had to offer and had me sweating bullets. Hope to see you again buddy. Same time, same place.

“Jeff Hensley made a good call early on in that deal to get off sequence,” Enfinger reiterated to Fox Sports 1 post-race. “We had good long-run speed. But once we’d cycle five laps or so we’d be a lot better than those guys. They were really hard to pass. So we got off sequence, that worked. In the end, those guys took tires, we didn’t. I was voting to stay out and Hensley was voting to come in. I convinced him to stay out. That cost us a shot. We try not to hang our heads too low. Proud of these guys; just didn’t work out tonight.”

"It's been a great year. I'm proud of these guys. Just didn't work out tonight."- @GrantEnfinger pic.twitter.com/1bW4Nt5dBc

The 35-year-old Enfinger finished the season with a career-high four wins, eight top fives and 13 top 10s. He won the season opener at Daytona International Speedway in a photo finish. He then won the fourth race of the season at Atlanta Motor Speedway.

Enfinger closed out the regular season with a win at Richmond Raceway before advancing to the Championship 4 via his Martinsville win.

“Overall, a strange year; an up and down year,” Enfinger said. “I’m proud of our guys. Very disappointed with how tonight went. Just going to try not to hang our head too low because it was overall a great year.”

As for 2021, while even the Truck Series schedule has not yet been announced, Enfinger hopefully will reprise his role driving the No. 98.

“Duke and Rhonda Thorson [ThorSport Racing team owners] have been absolutely great to me. Crazy strange year, but nothing’s finalized though I do hope to be back here next year.”