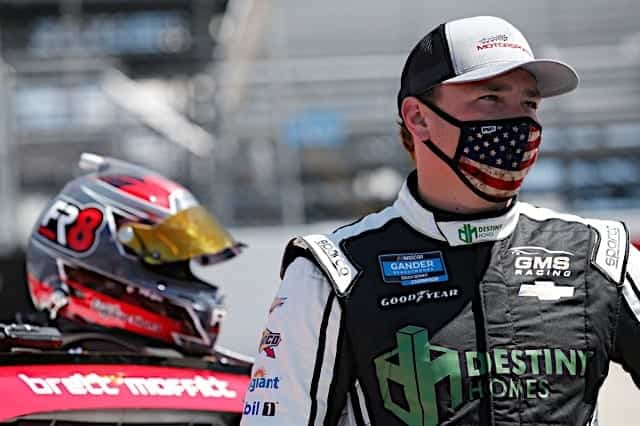 Everything looked perfect for Brett Moffitt as the NASCAR Gander RV & Outdoors’ Lucas Oil 150 at Phoenix Raceway was winding down. He had led more than half the race and was in position to win his second series title in three years.

Perfect, that is, until a caution flew with two laps to go.

Moffitt dominated the late laps after starting fourth, leading 78 total circuits, and had a three-second lead over Grant Enfinger when that yellow flew. After winning stage 2, the No. 23 was way out in front and chose not to pit while his two title-contending teammates did.

On the restart, Moffitt spun the tires slightly and his truck wobbled, allowing Enfinger to get an edge on him and sending Moffitt sliding back into the pack. The 2018 champion ended up finishing 10th as teammate Sheldon Creed secured the championship with a race win.

“I don’t have much good to say,” Moffitt said in his post-race interview. “We finally hit the setup right and can’t call a race to save our lives. It’s cost us multiple times this year, and now it cost us a championship. Unfortunate, but thankful to all my partners that have been with us all season long, everyone on this team for working hard. Just frustrating to lose one like that. It would’ve been an honor to win in this paint scheme with Jimmie Johnson, but I just want to say thank you Jimmie [for] everything you’ve done for our sport, and I wish you all the best.”

Ben Rhodes made some contact with Moffitt on the final restart, but Moffitt didn’t think it was intentional.

“Just out there on old tires,” he said. “Most laps on a set of tires we had all night. Stayed out like a sitting duck… it is what it is. I have nothing to say, really.

“I wanted some information on what [the pit situation] was looking like, and all they tell me is there’s chatter, and then everybody comes down pit road and there’s not enough cars to block the new tires. Race strategy has been a downfall of us all year, for sure. We’ve thrown away multiple wins because of it, and it’s frustrating to lose a championship because of it.”

Moffitt was one of three GMS Racing drivers to make it to the championship round in the desert. Creed won the race and title, while Zane Smith finished second.

For Phoenix, the No. 23 had a special paint scheme honoring seven-time Cup Series champion Jimmie Johnson, who will retire after Sunday’s (Nov. 8) race.

“It’s great,” he said. “I’m just in a bad mood, but it was cool to honor Jimmie. I appreciate him allowing me to do it; to me, he’s the greatest of all time and it’s frustrating that we didn’t put it where it belonged: in victory lane and winning a championship.”

“This year has been hell, on and off the racetrack,” he added. “It’s been a tough year in my personal life with everything that happened, and having a bad year on track certainly doesn’t help that at all. Honestly, I’m just glad it’s over at this point. … I don’t even know what I’m doing next year.”

A slow start to the season for Moffitt gave way to the pandemic stoppage, where he ended up breaking both legs in a motorcycle accident. He healed in time for the season to resume, winning at Kansas Speedway in October to lock himself into Phoenix.

I fast forwarded through most of the race as there wasn’t anything interesting to watch. Moffit had the dominate truck and it clearly showed. Nascar might as well just throw a scheduled caution with (2) laps to go so they can have their game 7 moment. Creed got lucky with the caution and the way the restart played out. This playoff format gets worse every year and it always appears something happens in the closing laps just to bunch up the field.

Bill B
Reply to  Mack

Kind of makes you feel like you’ve wasted your time watching the entire season when you could have just watched the last 2 laps of the last race.

Brett Moffitt never knowing where he’s going to be the next year is garbage. He’s too good to always having to deal with this. Maybe Our Motorsports in Xfinity will bring him back, but anyone mediocre with some money is going to get a ride before someone decent without. Landon Cassill didn’t even really have a ride this season… Gray Gaulding was only part-time… I hope Brett is full-time in one of the top three series next season. Same for Gray and Landon.

Moffit’s interview after the race sounded like burning bridge time for that team.