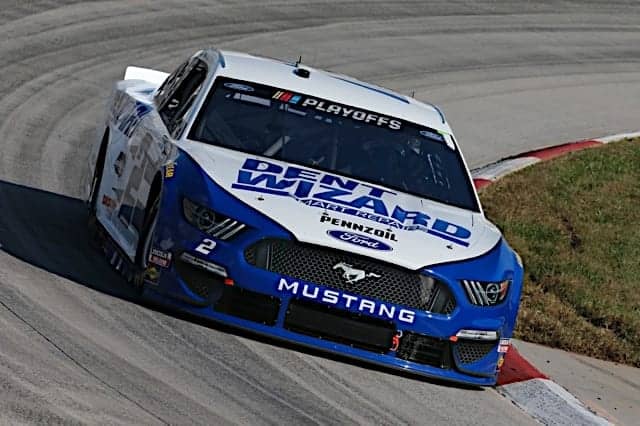 It all comes down to the final NASCAR Cup Series race of the 2020 season. Let’s get your NASCAR DraftKings rosters set for the championship at Phoenix Raceway.

It’s the first time the desert track will host the season finale as Homestead-Miami Speedway held that honor until this year. Teams return to Phoenix for the first time since March, before the pause in competition due to the COVID-19 pandemic.

The 1-mile track has quite a unique layout, paired with a sweeping turn 1 dogleg where cars attempt to make passes. It also features minimal banking, similar to New Hampshire Motor Speedway and Richmond Raceway. As usual, cars will come equipped with the higher horsepower package, featuring a small spoiler.

Four drivers will compete for the title: Denny Hamlin, Joey Logano, Brad Keselowski and Chase Elliott. While much of the focus will be on this quartet (and rightfully so), there are others who have also shown strength in the desert. You don’t necessarily need the champion in your DraftKings lineup, especially if they only lead the final lap. Fill out your roster with drivers that have a good track history here. There’s plenty of drivers who can be competitive Sunday, shooting in front of the competition to lead laps.

In many events at Phoenix, one driver typically leads over 100 laps. However, in March no one eclipsed the century mark, though four led at least 60 laps. You’ll still want to target those drivers, as well as ones who earned good finishes. Choosing the right dominators can make the difference between cashing your contests and missing the cutline.

Before I share this week’s picks, let’s review the results from Martinsville Speedway.

Ouch. In order for this lineup to win some contests, Chris Buescher needed to have a good day. Unfortunately, he had the exact opposite, crashing out on lap 146. Elliott would have been a good option as well, as he led 236 laps. Martin Truex Jr. was running well until a loose wheel dampened things; he finished 22nd.

You needed to score 267.5 DraftKings points in order to make a little profit (9 cents) in the $1 Happy Hour tournament. Additionally, 223.5 was the minimum cashing score in a single-entry double-up.

Yes, I know Keselowski hasn’t won at Phoenix yet, but what’s a better time to get his first win than Sunday’s race? He has great odds to win — as high as 4-1, per BetOnline.

Though the No. 2 Team Penske pilot has two finishes outside the top 10 in the past three Phoenix races, they weren’t exactly terrible. He ended 19th last spring, 10th last fall and 11th earlier this year. Keselowski also led 32 laps en route to a runner-up finish in 2018 and 82 laps last March after winning the second stage.

And how about this nugget: Keselowski’s bringing the same car he took to victory lane at New Hampshire Motor Speedway and Richmond Raceway. He dominated both events, leading 184 laps at New Hampshire and 192 at Richmond. If his pit crew can get him out ahead of his competitors, Keselowski’s sure to lead many laps there again and maybe even win.

While Busch isn’t battling for the championship this year, he’s still been very good at Phoenix. He won back-to-back races in fall 2018 and spring 2019, supplanting Kevin Harvick‘s impressive run of victories here. Additionally, Busch has led over 100 laps in four of the past seven events in the desert, including 245 total in 2018 and 177 last spring. Last fall, Busch held the top spot for 69 laps before ending in second. He followed that up with a podium finish in March. Finally, Busch has just one finish outside the top five in the past 10 races — a seventh in 2017.

Though the No. 18 Joe Gibbs Racing wheelman struggled for much of this year, he finally broke through to win at Texas Motor Speedway. Busch led 90 laps and saved just enough fuel to get him to the checkered flag, one of three consecutive top-10 finishes. He also was sixth at Richmond, perhaps a precursor to a strong run at a similar track.

Expect his strength at Phoenix to continue to shine this week.

Byron wasn’t on my initial list of DraftKings targets, but I realized he could score very well on Sunday. For one, he starts 25th; a top-15 finish will translate into 10 bonus points on DraftKings. Byron’s done it before, gaining 10 positions in fall 2018 to finish ninth. He also ended 10th after starting 17th earlier this season.

Byron, who won the second race at Daytona International Speedway to lock himself into the playoffs, also had a good result at NHMS this year. He drove Hendrick Motorsports’ No. 24 Chevrolet to 11th after beginning 16th. Last week at Martinsville Speedway, Byron was running in the top 15 when he crashed with about 60 laps left.

The rookie hopes to end the season on a higher note in the final race for seven-time championship crew chief Chad Knaus. I suspect he’ll deliver.

Reddick has had a nice rookie season, earning three top fives and nine top 10s this year. However, he didn’t start out well; he crashed out at Phoenix around lap 265 while running 14th. Reddick had a pretty fast car that day, too; he recorded 11 fastest laps prior to his incident.

More recently, the No. 8 driver for Richard Childress Racing finished 10th at NHMS and 11th at Richmond, gaining 11 positions at the latter event. He also finished fourth at Bristol Motor Speedway after starting 17th. Since Reddick starts 21st Sunday, he should have a fast enough car to get a top 15, which means more bonus points for you on DraftKings.

I don’t understand why Custer is this inexpensive, but I’m definitely taking advantage of it. He’s wound up in the top 15 in the past four races this year and scored 30 fantasy points or more each time. Also, in March, Custer took home a ninth at Phoenix after starting 16th. In August, at New Hampshire, Custer was eighth, then had a respectable 14th at Richmond in September. Custer has the equipment needed to perform, and if he can match or best Sunday’s starting position of 15th, he’ll get another 30-plus points on DraftKings.

In the NASCAR Xfinity Series, Custer had some good results at Phoenix. He had four straight top 10s at the track, earning top fives in each of the past two races. Last fall, he was runner-up to Justin Allgaier after leading four laps. The 2020 Cup Rookie of the Year can get another good result this week as long as there are no setbacks or mistakes made. Plus, he won’t break your bank, leaving you enough room to put two or three dominators in your DraftKings roster.

Preece is my dark horse performer because of his ability to finish better than where he begins. While JTG Daugherty Racing doesn’t have the same speed as top-tier teams, he’s starting 24th and can easily pay off this DraftKings salary with a good finish.

Earlier this season, Preece ended 18th at Phoenix, his best result yet there. Also, he moved up 14 spots at New Hampshire, one of his better tracks, crossing the line 16th. Though he was 20th at Richmond, Preece bounced back at Bristol to score a season-best ninth-place run.

Look for the JTG Daugherty Racing driver to try to beat his spring Phoenix result and end the year with another top 20.