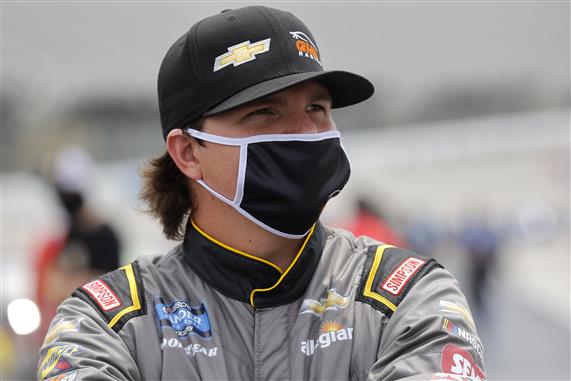 Meanwhile, back in the field, Dawson Cram was on pace to have a lackluster 24th-place result… until he tried to clear Tanner Gray and couldn’t do it. Cram’s spinning No. 41 Chevrolet on the Phoenix Raceway backstretch ended Moffitt’s dominant title performance, throwing the title race wide open.

The Gander Trucks Championship will be decided in NASCAR Overtime. pic.twitter.com/LXODf9ZqyY

Sheldon Creed was the ultimate beneficiary of that seemingly mundane mistake by Cram. With Moffitt a sitting duck and Creed on fresh rubber, the two-lap overtime dash was all he needed to claim his first career championship.

“The caution came out and me and (crew chief Jeff Stankiewicz) were taking and I’m like ‘we got nothing to lose and the worse we were going to run was fourth,'” Creed said. “We put tires on it. I pride myself on restarts week in and week out and we just nailed it.”

Creed completed an extraordinary turnaround after a rough rookie season in the Truck Series. The Californian jumped from four top-five finishes and missing the playoffs to five wins and a series title.

The extraordinary restart, meanwhile, squashed the championship dreams of Moffitt as well as Zane Smith and Grant Enfinger.

In true season-ending fashion, the combatants of the Championship 4 were stalwarts at the front of the field throughout the night.

By garnering the top four starting spots, all eyes focused on who would get the initial holeshot. That title belonged to Smith, who quickly disposed of polesitter Enfinger by lap 1 and went on to lead every lap of a caution-free stage one.

Notwithstanding Smith’s hot start, the quartet did not relinquish the top four positions at any point during the first stage. They maintained up front despite Moffitt taking a blow from Akinori Ogata‘s lapped truck.

.@Brett_Moffitt racing like he's hungry and there's a steak dinner in Victory Lane! ?

Early contact for the #Championship4 contender as he heads toward the front.#LucasOil150 pic.twitter.com/9LETHu5bgi

Under caution, Smith lost the lead on pit road. Instead, it was Moffitt who eked ahead, grabbing the stage two win after a rough-and-tumble squabble with Creed.

While the three GMS Racing teammates battled with each other, Enfinger was largely out of the picture. The polesitter lacked the speed needed to competitively take on his opponents, despite holding a position in the backside of the top five throughout the contest.

A relatively clean race with few incidents seemed to prevent the Enfinger team from employing any different strategies to manage the speed gap. However, when Carson Hocevar crashed in a shower of sparks on lap 104, Enfinger was the lone playoff driver to hit pit road.

.@CarsonHocevar hits the wall and brings out the first caution of the evening at @phoenixraceway.

Armed with adjustments and fresh rubber, the 35-year-old stormed through the field. The effort looked to be valiant but ill-fated, as the time to catch Moffitt had all but evaporated until he was saved by Cram’s mistake with two laps remaining.

Enfinger elected to stay out with Moffitt but could not fend off the charging Creed. Neither one could hold off the land rush of new Goodyears, finishing 10th and 13th, respectively.

Smith, also on fresh tires, finished second in both the race and the championship. Kyle Busch Motorsports teammates Chandler Smith, Christian Eckes and Raphael Lessard rounded out the top-five finishers.

Again, we have a backrunner determining the outcome of a race, but this time a championship. I’m sure NASCAR loved it because they got their drama at the end.

We should start a pool to pick the driver in the Cup event who spins out on his own with 10 laps to go, a suitable end to the latest example of Brian’s product.

That is unless Hamlin is leading.

Agreed.. reminded of that time in the Super Bowl, when that team had the ball with the lead and the clock running out (no timeouts left) and went to snap and kneel (non-politically) and collect the big trophy, when a player on a third team (also running around on the field at the same time) bumped into the quarterback, causing him to fumble, and the then the team that was all done for, snagged it and scored… happens all the time though, so no big deal.