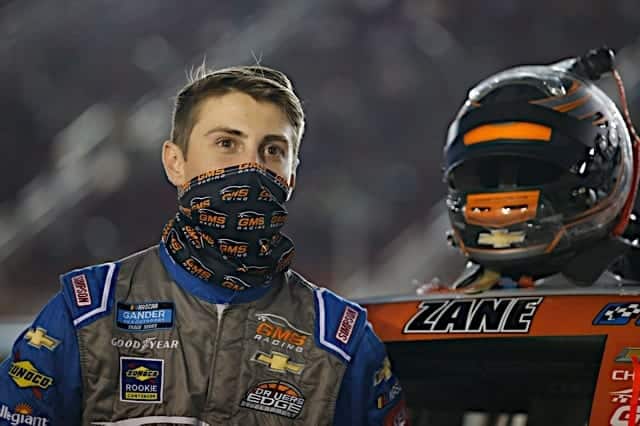 Zane Smith was trying to do something just one other rookie driver has done in the NASCAR Gander RV & Outdoor Truck Series: win the championship in his rookie year.

He came close, but no cigar in a race that ultimately slipped away from him.

Smith began the race in second, but by turn 2, the No. 21 truck was able to slip ahead of Grant Enfinger for the race lead. Smith then was able to scoot away from GMS Racing teammates — and championship competitors — Sheldon Creed and Brett Moffitt.

The No. 21 truck dominated the first stage, leading all 45 laps. But during the stage break, Smith was beat out of the pits by his GMS teammates and finished second.

That loss of track position seemed too much to overcome. During the final stage, Smith hovered around fifth, falling to last among the Championship 4 drivers. It appeared all hope for a title was lost.

But then a caution flew with three laps to go for a spinning Dawson Cram. While Moffitt and Enfinger stayed out, Creed and Smith pitted for fresh rubber, giving them an advantage for the final two-lap shootout.

Restarting 11th, Smith drove up to third on the first lap. Unfortunately for the No. 21 team, he wasn’t able to get by Creed, coming up just short of the race win and championship.

“Disgusted,” Smith said. “I’m happy for Sheldon, had an amazing year, along with us. Nothing hurts more than being the first loser. An amazing year, Rookie of the Year, just one spot short.”

On the final lap, Smith made a banzai move into turn 1 under Creed. He thought it was his only shot of winning the race — and the title.

“I wasn’t close enough to get to his bumper to try and make a pass going through the dog leg, so I just cut it all the way and was just hoping for the front end to grab,” Smith said. “But it just didn’t.”

Smith ends his rookie campaign with two victories, seven top-five and 13 top-10 finishes. Though he came up one spot short in 2020, he’s excited to give it a go in 2021 with GMS.

“It was a good year,” Smith said. “Man, it’s a disgusted feel to finish second in this deal, being that close. Luckily, I get to do it all again next year, so hopefully we’re one spot better.”