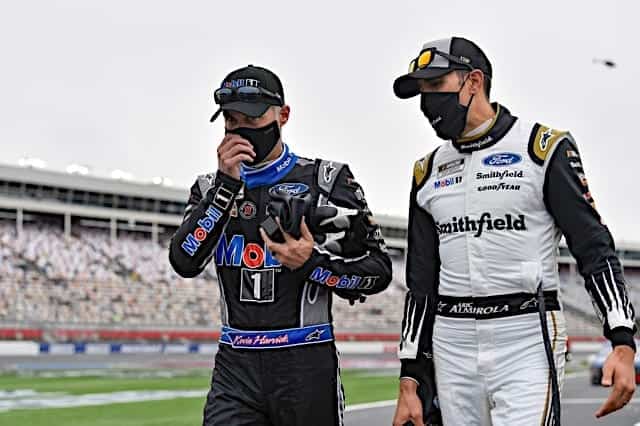 It’s the final stop on a chaotic and bizarre NASCAR Cup Series season, as 40 drivers head to Phoenix Raceway for one last race.

This race will decide a championship. The top finishing driver between Brad Keselowski, Joey Logano, Chase Elliott and Denny Hamlin will win the Bill France Cup.

I have my own pick in this battle, but it is also important to remember that there are 35 other drivers on track on Sunday. While it’s common sense to have a championship driver on your fantasy team, as all seven years of this format ended with the champion winning the race, it’s actually impossible to have all four drivers on a fantasy team.

This is due to all four drivers being in the top four of all drivers on the market this week. And it makes sense, as low momentum or questions heading into this race among that Championship 4 usually evaporate once the race begins. Even drivers who just aren’t great at a particular track have risen up to the challenge in this format.

Also, with only 0.1 points awarded for each lap led by a driver, the need for a dominator is less important when building a winning lineup. The 312-lap race will have a total of 31.2 points up for grabs in this category. Take note when building your roster and focus on mid-pack competitors who can climb up toward the front on race day.

Hamlin has never won a Cup championship, but this is arguably his best shot at it. While Hamlin has always been pretty good at Phoenix, the reconfiguration in 2018 has turned the track into a little more of a short track. This has played right into the hands of the driver who cut his teeth running at Virginia short tracks like Langley Speedway and South Boston Speedway.
And there’s evidence to this. Hamlin is actually the defending race winner at this track, dominating this event last year and locking himself into that year’s championship battle. While there are cases to be made for all four drivers, Hamlin’s case is probably the strongest.

Nothing to lose. That should be the mantra for this team this week after just barely missing out on the Championship 4 this weekend.
Harvick was formerly known as the master of Phoenix. Before the new configuration, Harvick won six races in an eight-race period and won his 10th overall Cup race at the track in early 2018. While Harvick has not won at the mile oval since, he has four top-10 finishes in four races and finished second in the spring race this year.
It is a shame that Harvick is not competing for a championship this year. The 2014 champion has enjoyed one of the greatest seasons in NASCAR history, having only failed to complete three laps this entire season and also setting a new modern era record for most top-20 finishes with 34. His 7.3 average finish this year is tied for the best mark in the 21st century with Jeff Gordon’s 2007 season. But like Gordon’s magical year, Harvick will not end this year hoisting the most important prize in this industry.

Outside of the superspeedway races, Almirola is never really a sexy pick for fantasy. But he can go out there and get a solid finish for a team just about every week, which is something I like to see from a driver in this salary range.

In 19 starts at Phoenix, Almirola has only missed seven laps. That’s a pretty crazy number and would almost certainly mean that Almirola is good for 30-or-so points just for finishing over 300 laps. Almirola also has some solid recent finishes at Phoenix on his resume, most notably two fourth-place finishes in 2018 and 2019.

DiBenedetto has never really wowed at Phoenix, but he has had some decent finishes considering where he’s been at in these price tiers.

While Phoenix is most certainly not a short track, in some ways it drives like one, and teams prepare like it is one. DiBenedetto has success at many short tracks, with a great record at Bristol Motor Speedway and a top-10 finish last week at Martinsville Speedway. DiBenedetto might be able to compete for a top-10 finish this weekend, and, if not ,should at least come home in the top 15.

Nemechek will end his rookie campaign in the Cup Series on Sunday. While he failed to capture Rookie of the Year honors and is currently a free agent, he can at least hang his hat on following in the footsteps of his father and becoming, at least for one season, a Cup driver.

Nemechek has had a lot of reliability issues; the young driver has pushed his car just a bit too much at times this season and have ended up having to walk back to the garage on more than one occasion. Still, Nemechek has completed over 99% of his laps in two starts at Phoenix, and if he can stay out of trouble, he may just compete for a top 20 this weekend.