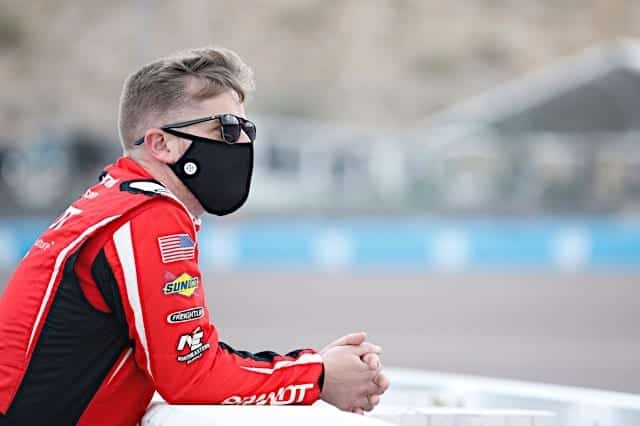 Ahead of the NASCAR Xfinity Series’ championship race at Phoenix Raceway, all eyes were on Justin Allgaier. After all, he’d won at the track two previous times and had more starts than his three championship competitors combined.

Starting from the pole position, Allgaier led the opening six laps of he race. He was passed by Chase Briscoe, who went on to win the opening stage. The second stage was much of the same, the No. 7 car was quick early, but gave up long run speed, and Austin Cindric was able to get by for the stage win.

By the beginning of the final stage, it was clear: Allgaier had the best car on the short run while Cindric was much faster on the long run. And the beginning part of the third stage was a 72-lap run, which included green flag pit stops. With 30 laps remaining, Joe Graf Jr. got into the wall bringing out the caution, trapping Briscoe and Justin Haley a lap off the pace.

On the restart, Cindric rocketed away from Allgaier, who elected to pit under the caution flag to put on fresh tires. Despite the seven-lap tire advantage, the No. 7 Chevrolet wasn’t able to get by the No. 22, though a caution flew for a spinning Briscoe with three laps remaining.

Cindric, the race leader, elected to pit while Allgaier stayed out, not having a fresh set of tires in the pits. On the restart, Allgaier was only able to hold on for one lap, while the No. 22 car bulldozed his way to the lead, splitting the No. 7 and Noah Gragson.

Allgaier dropped to fifth at the checkered flag, second in the championship order.

“So close but so far,” Allgaier said post-race. […] “I knew [Cindric was] going to be good on tires. I was hoping there was going to be a few more cars in our rearview mirror when we took the green. … just didn’t have the speed at the end.

“We were off a little bit all night. The hard part is, our balance is so good. That’s the frustrating part. We had a fantastic racecar and the balance was so good, it’s disappointing to be in the situation we were in.”

Despite having the balance be slightly off, Allgaier led a race-high 76 laps.

Since the Xfinity Series has had a playoff format beginning in 2016, Allgaier has now been apart of four Championship 4 battles, coming up short in all of them. Previously, he’d battled it out at Homestead-Miami Speedway, one of his worst tracks on the schedule. On the flip side, Phoenix is one of his best tracks, so he felt an extra boost of confidence going into the season finale.

Allgaier’s runner-up finish in points is the best of his 10-year Xfinity career. In his prior Championship 4 bouts, he placed third (twice) and fourth. So despite being closer and seeing Cindric walk away with the win, it didn’t make it harder for the Illinois native.

“When the caution came out, we had a shot at it. It didn’t work out and we finished fifth, but how crazy would it have been if we were able to hold those guys off. We did everything we could tonight to try and win a championship, and just came up a spot short.

“It’s a heartbreaker. I’ll be the first to say, I’m beyond disappointed that we didn’t win the championship, but when I walk out of the racetrack I can tell you 100% I gave 100% and there was nothing left on the table.”

Fortunately for Allgaier, he will be back for another Xfinity season with JR Motorsports in 2021, but so will Cindric and Haley.