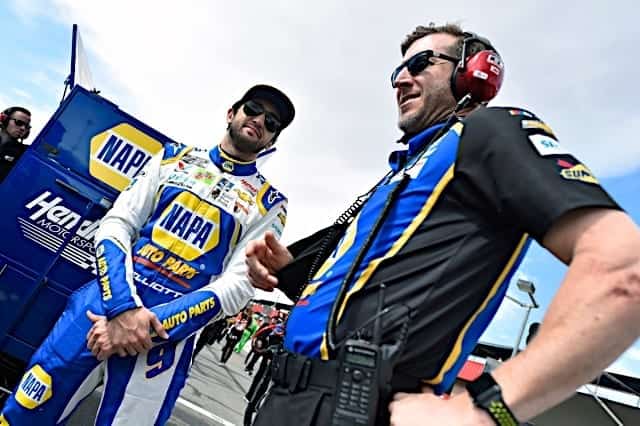 Alan Gustafson has worked with elite drivers in his career, including current or future NASCAR Hall of Famers Mark Martin, Kyle Busch, and Jeff Gordon.

None of them delivered him a NASCAR Cup Series championship, nor did he deliver one to them.

In his 16th season as a Cup Series crew chief, he and Chase Elliott powered their way to the 2020 NASCAR Cup Series title with a win at Phoenix Raceway, one week after winning his way into the Championship 4 at Martinsville Speedway.

Gustafson has had a successful career at stock-car racing’s highest levels since first sitting atop the pit box in 2005. He won four races with Busch, five with Martin and 11 with Gordon.

Now, he’s reached 11 victories with Elliott, all coming over the past three seasons, capped of course by Sunday’s (Nov. 8) title-clinching victory.

Gustafson and Martin finished second in points together in 2009 before Gordon wheeled his way to a third-place points finish in 2015. Elliott spoke with Gordon via phone after the race and couldn’t help but acknowledge how critical their connection to Gustafson is.

“I think it’s kind of unique and special for he and I because we both work with Alan, and he had a run at a championship with Alan and things didn’t work out,” Elliott said. “I just think he’s [Gordon] probably one of very few people that respect AG the way I do and believe in him like I do. So I think he just knows how big of a deal it is for him.

“He’s been a championship crew chief for a long time. It just took until today to actually have the title next to his name. Man, I’m proud of him. I wouldn’t want to go to war with anybody else.”

In part, Gustafson gives credit to the veteran Martin for teaching him a valuable lesson early that likely prepared Gustafson for a young driver like Elliott.

“Really, to be honest with you, since that point in time with him, I’ve taken that philosophy. He taught me a pretty valuable lesson. Regardless if it’s Mark Martin, Jeff Gordon, Chase Elliott, the team, myself, we just try to put the drivers in the best position we can so they succeed and feed them as much information as we can and try to educate them as much as possible and try to put them in a position to put their best foot forward.”

That resulted in a championship run and did so during perhaps NASCAR’s most challenging year. And that he accomplished the feat in 2020 is perhaps most impressive, not solely because of the unique challenges the COVID-affected season provided, but also in part because of the public criticism some of his pit-strategy calls.

A decision to pit for four tires before the final restart of the Coca-Cola 600 at Charlotte Motor Speedway brought many naysayers Gustafson’s way after Elliott led 38 laps en route to an eventual second-place finish. Gustafson still takes responsibility for that loss.

The team redeemed itself four days later with a Thursday night win at Charlotte as well as five months later with a win on the ROVAL. And while Gustafson holds himself accountable for the races that got away, he knows he can breathe a little easier now.

The leadership exemplified by Gustafson and the pit crew of the No. 9 team showed itself in momentous ways in the penultimate race of the season at Martinsville.

Elliott unquestionably had the dominant car of the day, but that was all put in jeopardy when jackman TJ Semke jumped over the pit wall too soon before the final pit stop of the event. Semke recognized his mistake quickly enough to tag back to the wall, doing just enough to nullify the penalty and continue service.

That moment preserved Elliott’s hopes of advancing in a must-win scenario. The 24-year-old capitalized, won, propelled himself forward and clinched a championship based largely upon Gustafson’s team leadership.

From Gustafson’s perspective, 2020 in some ways provided a throwback feel. The process was “really pared down,” he said, citing that he and his engineer as well as his first-year car chief had to work on the car together.

“From the truck drivers to all the team members, everybody has got to pitch in and everybody has got to do a lot,” Gustafson said. “It just reminds me of the way racing was when I was growing up as a kid. It just was a small group of people probably working more hours than they should and putting a lot of effort towards trying to have a common goal and win races.”

Gustafson lived in that mindset all season and made sure his team did too.

“I have a simple philosophy, I always have, is you just lead by example,” he said. “Talk is cheap. You’ve got to go do it. You have to set that standard and go do what you want your guys to do, and don’t tell me, show me. That’s all I’ve ever tried to do, and this wasn’t any different.

“But it was really intimate with the guys, and I really enjoyed that. I think the whole team did. It brought us together closer and I think also made us stronger. It’s something I think we’ve learned from and will serve us well in the future, is just being able to lean on each other.”

It was known all season the champion would be crowned at Phoenix, a 1-mile track featuring the low-downforce, high-horsepower package. Elliott proved he was a regular favorite to win the road courses, but the team hadn’t manifested that speed on short tracks, particularly not into wins.

That speed and strength finally culminated in a title run over the course of two weeks – the two most critical weeks all season.

So happy for Chase Elliott to win. I live in Marietta Ga, not too far from Dawsonville. I have pulled for Chase since he started in Cup. He’s such a nice young man. Must have been raised right, thanks to his parents and grandparents. I was so nervous and so happy there were no cautions there at the end. I prayed that he would win. God heard and answered my prayer. Congratulations Chase.