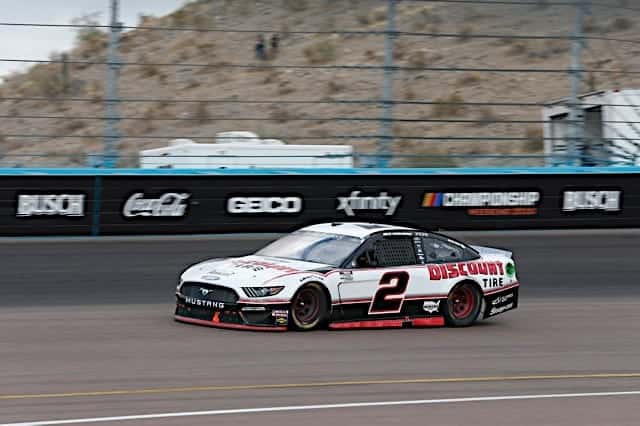 Ahead of the NASCAR Cup Series championship race at Phoenix Raceway, Brad Keselowski was confident, believing he was one of, if not the favorite for the championship. After all, the No. 2 team had three wins in 2020 on tracks similar to the Phoenix.

Because polesitter Chase Elliott had to start at the rear for failing pre-race technical inspection, Keselowski lined up on the front row to begin the 312-lap race. But from the get-go, his Team Penske teammate Joey Logano gapped the field.

Keselowski was even passed by the fourth Championship 4 driver Denny Hamlin but settled in third until the competition caution. Then the No. 2 team had a bad pit stop, dropping six positions. By the end of the final stage, Keselowski rebounded to fourth.

Poor pit stops turned out to be a theme of Keselowski’s day.

In the second stage, Keselowski was the first to pit on lap 128 during a cycle of green-flag pit stops, giving him the lead after it cycled through. However, he was soon passed by both Elliott and Logano until a caution flew on lap 160 for James Davison. On the restart, Keselowski rocketed to the lead, then was passed by the No. 9 car. But on the final corner of the final lap, the No. 2 got by Elliott for the stage win — his seventh of the season.

During the pit stops on the stage break, Keselowski’s team lost four positions, dropping to fifth. He rebounded to third, but during the second green flag pit cycle of the day, the No. 2 had a third bad pit stop, dropping to fourth, nearly six seconds off the lead.

Over the final 50 laps, Keselowski raced to second, 2.7 seconds behind Elliott, who was crowned the 2020 champion.

“I would have liked to have had one of those late-race yellows like we saw in the Truck and Xfinity race(s), Keselowski said post-race. “I thought we were pretty good there, just didn’t have the track position to make it show.

“I thought we had a shot at the end of the second stage and just couldn’t keep it up in spot to keep it where we could have a lead.”

This season, Keselowski worked with Jeremy Bullins as crew chief, who jumped over to the No. 2 car after spending the previous four full-time seasons with Ryan Blaney. The 2012 champion, who placed his best in the championship standings since then, wouldn’t throw shade on his crew, blaming them for the loss.

“At the end of stage two I was right where I want to be, in the lead, and we lost a spot, which is not fun,” Keselowski said. “But it’s a team effort and just was tough to fight back through.

“We got up to second there at the end, and I feel like we were pretty equal. The [No.] 9 car and I would have loved to have a chance to race it out, but that’s not the way it played out.”

Keselowski finished the season with four victories, three of which came on 750 horsepower tracks (what was used at Phoenix). At New Hampshire Motor Speedway, he dominated by leading 184 of 301 laps. At Richmond Raceway, the No. 2 Ford paced the field for 192 of 400 circuits. The car run on Sunday was the same he won both of those races in.

Because of his success on 750 hp tracks this season, Keselowski is indifferent on whether he let this championship slip away.

“I feel like I did all I could do,” he said. “With that in mind, you try to shake it off and move on.  I mean, I can’t change anything about what happened, and I hate it for my guys that that’s the way it played out, but so it goes.

“I’m disappointed, but I’m also proud at the same time. My team brought a great car and we ran a hell of a race. […] Won stage two and made a convincing case that we probably could have won the race today, but it just didn’t come together with the track position.

“I can be disappointed in that. I think I’m probably more focused on the positives.”

Keselowski ends the season with four victories, 13 top-five and 24 top-10 finishes, his most since 2015.

Class act Brad. You had the car, but it’s a team sport. Stay positive.

Brad had been losing spots in the pits since the cursed playoffs started. It was his Achilles Heel and I saw it coming.