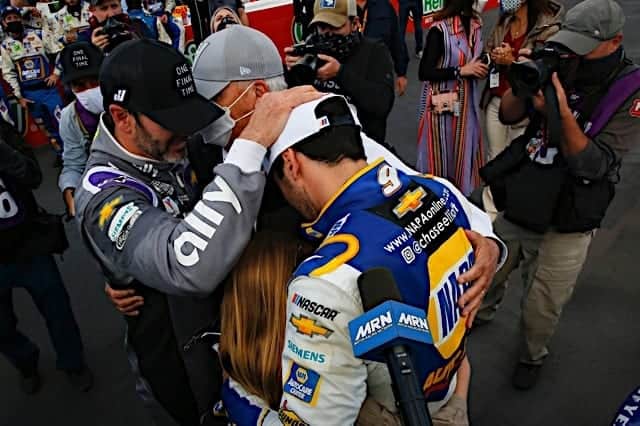 Huge congratulations to Chase Elliott on his first Cup championship, matching a feat his father Bill achieved all the way back in 1988. Chase’s dominant, nerveless, winning performances at both Martinsville Speedway and Phoenix Raceway these past two weeks, all with the incessant pressure of the playoff format, showed he is a true and worthy champion. Yes, Kevin Harvick may have had a better season statistically — a way better season to be fair — but when it came time for the pay window to open, Chase was first in line and got it done just as Harvick himself did in 2014, winning the final two races in the first season of this format for his title. For NASCAR, it’s quite the symbiotic moment to have the champion also be the most popular driver by quite some margin.

Back in the 1990s, a young Hendrick Motorsports star became a breakout crossover star. Could Chase be next? Watch this space, as they say. Given his prowess on the road courses, and by prowess I mean different zip code-type dominance, the schedule lines up nicely for Elliott to pick up plenty of wins and stage points in the 2021 regular season. He might not even need to win the penultimate race next time around. Yeah, it’s early, but mark him up as the preliminary favorite for next season’s title. At 24, he’s only going to get better, which should be worrying for the rest of the field.

In the end, it was one last top five for seven-time champion Jimmie Johnson to round out what has been an absolutely exceptional NASCAR career, defined by both his genial personality and his ruthless competitive streak on it. All told, his final numbers are off the charts remarkable: seven titles, 84 wins, 232 top fives, 374 top 10s, 36 poles and 18,941 laps led. Just pausing for a minute there on laps led, by comparison, Chase Elliott has run 19,038 laps across the 2019 and 2020 seasons. Jimmie has, with this in mind, paced the front of the field for two full years. Remarkable.

As Johnson brings his time in stock car racing to a full time close and sets off to race the road courses on the IndyCar circuit in 2021, it is well worth pausing to salute a great ambassador for the sport on and off the track, and in particular his run of five straight titles (2006-2010). In this current iteration of the playoffs, it seems unlikely one driver will ever reel off five in a row again. Carl Edwards (2008), Mark Martin (2009) and Denny Hamlin (2010) are all champions without Jimmie’s unrelenting excellence, and Jeff Gordon (2007) would not be stuck on four titles. Of course, that’s easy to say, but it’s noteworthy nonetheless given who he beat out. I’m really looking forward to seeing how he makes the transition to a partial IndyCar schedule in 2021. As always, Johnson will be worth watching.

With a win at the Turkish Grand Prix next Sunday, Lewis Hamilton can seal a seventh title and equal Michael Schumacher’s record. The British veteran will pick up the championship if he finishes ahead of Valtteri Bottas or so long as his Finnish teammate doesn’t outscore him by eight points. Given Hamilton has won the last three races and a whopping nine of the 13 races run so far, it’s seems very likely he will clinch the crown this weekend. As I’ve asked before, the question is how much further does Hamilton want to go. With the salary cap regulations pushed back a year, Hamilton likely has another season to run the table in 2021. What happens in 2022 is anyone’s guess, but even with the new rules, I wouldn’t bet against Mercedes to find a way to the best car. First, though, there is business to take care of in 2020 and a title to officially secure. My guess is he’ll be celebrating just that in Turkey this Sunday.

Next Up: The Great American Race

In just over three months, 97 days at the time of writing, we’ll be back at it for the 2021 season. And after a season of unrelenting and total change, we’ll be looking at something approaching more normalcy in 2021. Well, sort of. With five (not two) road courses in the regular season, the road-racing experts will be rubbing their hands with glee. We’ll also see, at some point, fans being able to return to the track in regular fashion with the recent news of promising developments for a vaccine. We’ll also keep at least one doubleheader at Pocono (June 26/27) and race on dirt at Bristol, which I have to say is already must-see TV for me. We’ll also see a number of races without practice and qualifying, similar to what we’ve seen in 2020 since the return to racing. Mostly, though, I’m looking forward to the back of 2020. Hope springs eternal, as it always should, in 2021.

And finally, at the conclusion of my 13th season writing for this wonderful site, I want to take a minute and thank all of you who’ve read my columns this season and especially those who’ve taken the time to comment. Yes, even those comments when you’re telling me I’m a moron. I get it. I often am. Like the rest of us, I’m flawed, imperfect and very fallible. I also want to thank the fine folk who have the misfortune of editing my unpolished pieces. You make the hard yards look easy. Thank you, very sincerely.

Don’t expect a quick return to normalcy just because there is a vaccine. Many people have become fearful of returning to normal. And with no practice or qualifying it means no normalcy at those venues. No pit passes, etc. Full fans in the stands with no social distancing and masks? Don’t bet on it anytime soon next year. They want to control people a bit longer and many will welcome it.

I will be interested to see how/if fans return to the tracks. No practice, no qualifying, just the race. When you pay top dollar for tickets you used to get a couple days entertainment wit cars on the track, soaking up the atmosphere and the fumes and the noise. Not sur I would be willing to pay $135 to sit in the stands for one day and a 4 hour race. Could get interesting.

Going to miss this site on a daily basis until February! Stay safe everyone.