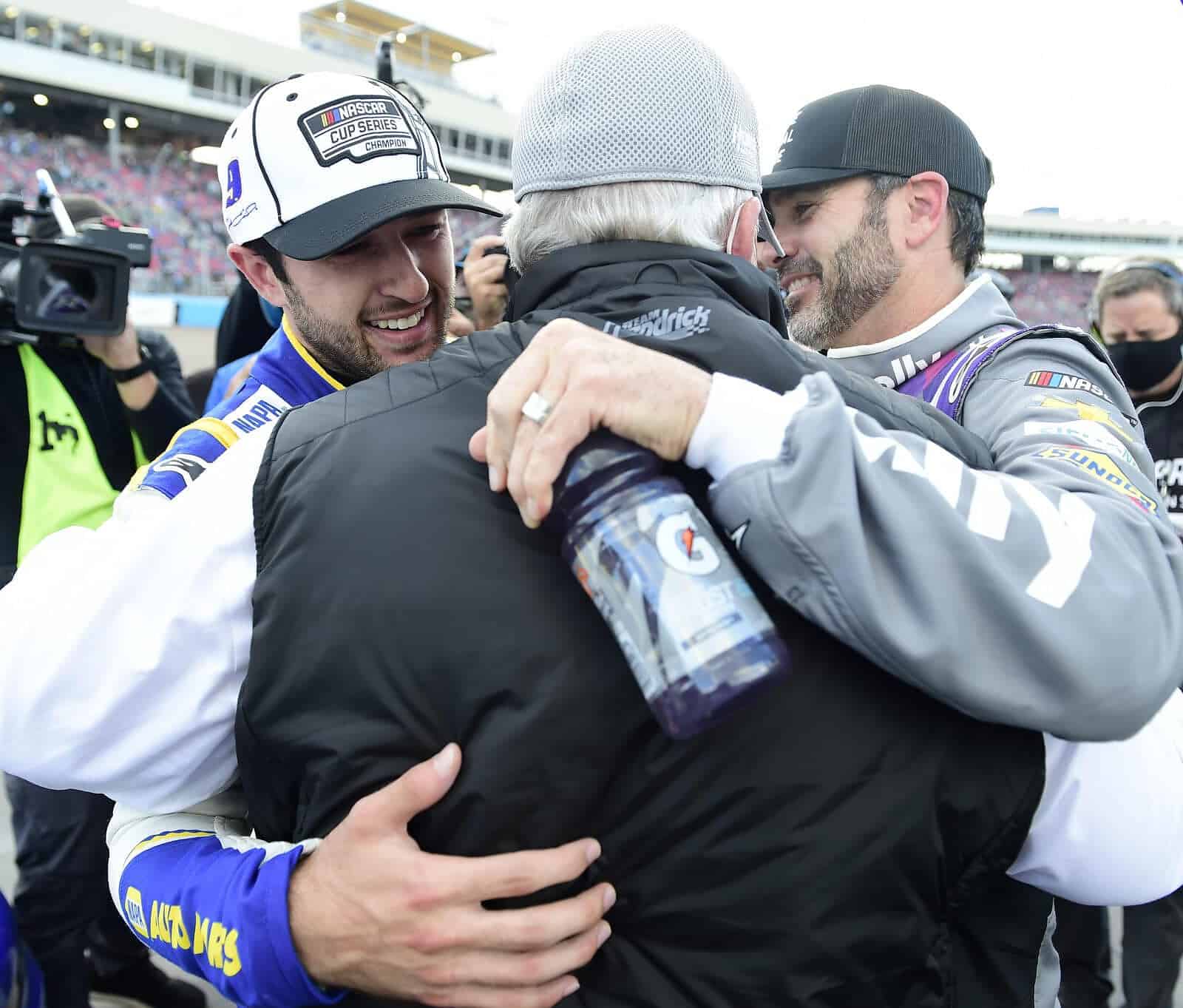 It wasn’t long ago that Hendrick Motorsports had one of the oldest driver lineups in NASCAR.  Five years ago, at the time of Jeff Gordon’s final race in his famed No. 24 car, the organization’s youngest driver was Kasey Kahne at 35 years old.  With Gordon’s career wrapping up amid a bourgeoning youth movement in NASCAR, many wondered who would take the reins at HMS as the team’s other drivers got closer to retirement.

Fast forward to the end of 2020 when Hendrick’s driver roster is almost completely different.  Chase Elliott filled Gordon’s seat beginning in 2016.  Kahne left the team at the end of 2017 after a few lean years; meanwhile, Dale Earnhardt Jr. got a hero’s sendoff the same season as he retired from competing in the Cup Series.  William Byron moved up from the NASCAR Xfinity Series to replace Kahne while Alex Bowman took over for Earnhardt.  Jimmie Johnson, HMS’ living legend, the seven-time champion, remained the foundation of the team.

But as Johnson’s new teammates got acclimated with the Cup Series, Hendrick Motorsports suffered a decline in performance.  During Johnson’s reign, and Gordon’s before that, the HMS Chevys always seemed to fly to the front of the field with ease.  That didn’t happen very much with the new Hendrick lineup.  Elliott usually had the most speed of the foursome but struggled to close out races early in his career.  When Bowman and Byron joined the team, they both showed flashes of excellence yet only ran at the front of the pack on occasion.

Johnson, meanwhile, began to experience a long, slow decline.  He and the No. 48 team assembled one last spectacular run through the playoffs in 2016, resulting in Johnson’s seventh Cup Series title.  In 2017, he reeled off three wins early in the season.  But the rest of the year included zero wins and only one additional top five.  While Johnson did get to the Round of 8 in the playoffs, he never felt like a serious championship contender down the stretch.

Elliott also made it to the Round of 8 in 2017, but he suffered a few painful losses in pursuit of his first win.  Late in the race at Martinsville Speedway, Elliott was spun by Denny Hamlin and missed out on capturing the checkered flag.  Elliott got revenge on Hamlin at Phoenix Raceway two weeks later by forcing Hamlin into the wall, eventually causing the No. 11 to crash.  Elliott had a shot at winning that race, too, but a flawless to drive to checkers by Matt Kenseth kept Elliott out of victory lane again.  No Hendrick driver reached the championship race in 2017.

The following season was a rough one for Hendrick Motorsports.  While Elliott finally broke through and earned his first wins in 2018, the rest of the team had little to show for its efforts.  Johnson experienced the first winless season of his career and parted ways with crew chief Chad Knaus after the season.  Bowman squeaked into the playoffs and posted some admirable results but went through a lot of growing pains.  Byron, despite a meteoric rise through NASCAR’s ranks, struggled during his rookie season.  On top of it all, the new Chevy Camaro body seemed to throw Hendrick’s engineers for a loop.  Elliott’s three victories were the only ones by the organization in 2018.  One again, none of the team’s drivers made it to the final round of the playoffs.

By 2019, Hendrick no longer had a claim to being NASCAR’s top team.  The success of Joe Gibbs Racing, Team Penske and Stewart-Haas Racing allowed those organizations to climb to the summit of the NASCAR mountain.  HMS was still a good organization, but it was impossible to deny that the team was going through a transition phase.  The normally reliable Johnson not only went winless in 2019, he missed the playoffs completely.  Byron had a much better season yet wasn’t able to reach victory lane either.  Bowman did get his first Cup Series win, taking a step forward. However, the No. 88 Chevy team was never seriously considered a Championship 4 contender.

Instead, Hendrick’s brightest star was once again Elliott, who earned another three wins.  He was the only Hendrick driver to reach the Round of 8, although three dismal finishes kept him far away from advancing any further.  Gibbs and SHR wound up splitting the Championship 4 slots.

Even when Hendrick got off to a fast start in 2020, it almost didn’t seem real.  With Johnson continuing to struggle, Bowman and Byron still fighting through up-and-down results and Elliott having some of his old race-closing issues, it was worth wondering if HMS was going in the wrong direction.  Asking any group of drivers to live up to the legacies of Gordon and Johnson would be nearly impossible expectations.  However, the new Hendrick Motorsports felt like a team that was constantly a step behind JGR, SHR and Team Penske.  If Hendrick wanted to reclaim its title as the best in the business, someone on the team had to figure out how to beat the best.

In the end, the postseason was the key to Hendrick’s success.  It wasn’t Johnson this time, who missed the playoffs again and struggled through another winless season.  Instead, it was Elliott’s turn to crack the code of NASCAR’s playoffs.  The No. 9 team endured a tough loss in the Southern 500 but did plenty to advance into the Round of 12.  Elliott’s win at the Charlotte Motor Speedway ROVAL then ensured his passage to the Round of 8.  Once there, he battled some tough competition, but a win at Martinsville Speedway put him in the Championship 4 for the first time.  And on Sunday, Elliott drove away from everybody to win his first Cup Series championship.

Elliott’s 2020 season is reminiscent of so many of Johnson’s title runs.  While Kevin Harvick and Hamlin had flashier years, filled with more wins, Elliott was the one who just kept getting better as the year went on.  It was a game plan straight out of the Jimmie Johnson playbook.  By scoring three wins in the last five races of the season, Elliott showed resiliency and toughness that had eluded him in previous years.  More than any other moment in his career, the 2020 championship is a sign he can be the team leader HMS needs as Johnson hangs up his helmet.

For the first time in quite a while, the future looks bright at Hendrick Motorsports.  Byron is now a Cup Series winner and will get his old crew chief, Rudy Fugle, from the Gander RV & Outdoor Truck Series next year.  Bowman made the deepest playoff run of his career and got eliminated by a lack of playoff points rather than bad postseason performances.  The addition of Kyle Larson to the newly-renumbered No. 5 also gives the team another major weapon in 2021.  And with Johnson stepping away, it is Elliott’s turn to be the foundation of the team.

The rebuilding of Rick Hendrick’s organization is suddenly complete.

I have certainly had my doubts about HMS as they seemed to struggle with speed and slipped to a second-tier team. As an Elliott fan, I sometimes wished he could hook up with a Ford team. However, Alan, Eddie, all the guys in the shop, and the pit crew all performed nearly flawlessly when it mattered. And Chase has improved by leaps and bounds over the last year or two and is a threat to win every race, joining the likes of Kyle Busch, Harvick, and the Penske teams. At only age 24, if he continues improving at the rate he has done so far, he has the potential to win many races and more championships.

This should also put Laron’s addition into a different perspective. If Larson thought he was coming in as the “most talented” HMS driver, as some media members have claimed, he will only need to see the Championship banner in the shop to realize Chase is now the face of HMS and is quickly becoming the face of NASCAR.