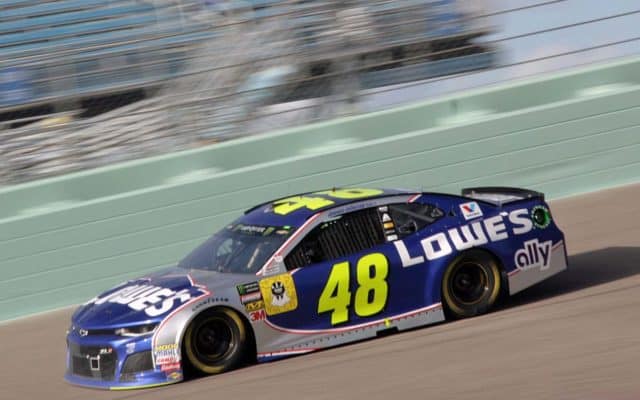 One of the greatest career performances in motorsports drew to a close this past week at Phoenix Raceway as Jimmie Johnson exited from full-time NASCAR competition.

Not wanting to apply the retirement tag, as that has proved to be a bit premature in a few instances over the last few years, Johnson will be competing part time in the NTT IndyCar series in 2021. His seven Cup Series championships are equaled only by “The King,” Richard Petty, and “The Intimidator,” Dale Earnhardt, while Johnson’s 83 career victories have him tied for fifth all-time, 10 behind former teammate and four-time champion Jeff Gordon.

Given those accomplishments, it would seem to most that Johnson is arguably one of the greatest drivers of all time. But is a career defined by stats alone? Has Johnson’s time atop the sport for over a decade had the same impact as the other three luminaries who helped define NASCAR over the last 50 years? This week Mark Kristl and Vito Pugliese square off in our own season finale of 2-Headed Monster.

Johnson Is the Greatest Driver in the 21st Century

Statistics serve as the benchmark for measuring competitors – and statistically, Jimmie Johnson is one of the top five greatest NASCAR drivers of all-time. On top of that, he’s the greatest driver of the 21st century.

Yes, Johnson is tied with Richard Petty and Dale Earnhardt for most career titles, and neither Petty nor Earnhardt competed under a playoff format. That said, Johnson won seven titles, which isn’t an easy feat, all in NASCAR’s playoff era. Why are we penalizing him for winning those championships under the format designed by NASCAR?

Of his seven titles, Johnson won five straight from 2006-2010. In those five years, he won 35 races. Those five years alone would put him 24th on the all-time Cup Series wins list. Johnson has more wins than Earnhardt and more championships than his mentor Gordon. He is in the same conversation as those two. Yes, he still trails The King, but I argue The King is the best NASCAR driver in history. That doesn’t have to take away from Johnson.

NASCAR has completed 21 seasons this century. Johnson leads all drivers with 83 wins, 25 more than his closest competitor Kevin Harvick, and 26 more than Kyle Busch. The fourth-winningest driver in this century is NASCAR Hall of Famer Tony Stewart with 46 victories. In this century, Johnson is more than a full season’s worth of wins ahead of all but two NASCAR drivers.

Since 1997, he leads all drivers with victories. The mind-boggling aspect? Johnson did not begin his career until 2001, and he has run full-time since 2002!

So, there it is. Johnson is the greatest driver of this century.

Jimmie Johnson was a once-in-a-lifetime driver. He won five straight championships, enjoyed terrific success with crew chief Chad Knaus and dominated wherever the series went for many years.

When NASCAR fans think of the great drivers and their associated numbers, the numbers which come to mind are Petty in the No. 43, Earnhardt in the No. 3, and Gordon in the No. 24. From here on out, Jimmie Johnson and the No. 48 will forever be included in that conversation, which makes him one of the all-time greats. – Mark Kristl

The Most Dominant Driver of a Conflicted Era

While Jimmie Johnson brought his full-time Cup career to a close this Sunday, it was an appropriate time to reflect on a body of work that spanned 19 seasons of driving for the same car owner and in the same car – and, until last season, with the same crew chief. A quick glance at the stats puts his place in the sport’s history in perspective pretty quickly: 83 wins, seven championships and a pair of Daytona 500s. You’d be hard-pressed to find anybody who has anything bad to say about the guy. Which of course brings me to the counterpoint of this week’s topic of whether these stats raise him to the iconic level of Petty, Earnhardt, or Jeff Gordon.

Unfortunately, I have to be the wet blanket here and say, “No.”

A look at the data seems pretty black and white. Eighty-three wins ties Johnson with Cale Yarborough, one win behind Darrell Waltrip and two from Bobby Allison. Seven championships: There are only two other guys who can say that, and they both have iconic sunglasses and mustaches to help drive the point home. Johnson even has 40% more championships than his former teammate and mentor, Gordon. The same seat and crew chief for over a decade and a half helps, but it’s also a testament to his flexibility and affability as an ideal teammate to work with.

So, what gives? Why doesn’t Johnson seem to get the same recognition as the other drivers who are synonymous with the sport?

For me, it coincides with the way we started scoring championships. Johnson won his first title in 2006, the third year of the 10-race Chase format. He then followed it up with successive titles through 2010. During this period, it was largely the same tracks and schedule of 1.5-mile dominant tracks that were the bread and butter of HMS during this era. He also raced the original iteration of the COT from 2007-2009, which was not exactly the pinnacle of downforce track competition. The same-races-same-faces era and an historic economic downturn brought about apathy from fans as attendance waned and ratings that nose-dived. While dominance in other sports is often heralded – even in other motorsports – Johnson’s success just didn’t seem to resonate.

While he was simply competing under the rules of the championship being contested at the time, it is the era of playoff-type championship scoring that just doesn’t rise to the level of the epic season-long battles. Think about Petty versus Darrell Waltrip in 1979, or Earnhardt and Martin in 1990, or the generational shift that saw Earnhardt fans versus Gordon fans become a weekly Ohio State vs. Michigan contest in the stands and infield as much as it was on the track. Johnson’s had some amazing runs and performances, but none were particularly memorable or exciting.

Don’t confuse this with besmirching his record or accomplishments, as that is definitely not the case. He’s set the standard and arguably the prototype for what’s expected of the modern NASCAR driver from demeanor, presentation and professionalism. But much like we say when it’s time to nominate someone for the Hall of Fame: It’s the Hall of Fame, not the Hall of Statistics. Johnson’s legacy is more of the result of a championship system that after several iterations just doesn’t seem to carry the same weight as those won by other legends of the sport. – Vito Pugliese

Exactly right Vito…the championship is “nice to win” as Harvick said, but he’d rather have a 9 win season. Nascar should reevaluate their championship. I bet their ratings would increase if we had a full season champion + added points for race wins…say…a 15 pt bonus for each win…..2 pts for leading at halfway…5 pts for leading the moat laps. Stop this….”trying to compete” with stick and ball sports and football. Just BE NASCAR.

Exactly hit the nail on the head. While I take nothing away from JJ’s accomplishments, I can’t say he had the impact that any of the other 3 drivers had on racing. Petty became ‘The King’, and not just in racing. Earnhardt helped put racing on pages other than sports, and Gordon started the new era of young guns. As nice a guy as Jimmy is, I can’t say that he had an impact outside the track, making an impression on those not just into racing. The chase/playoff format doesn’t enhance his reputation either. A great driver, but no Petty or Earnhardt, or even Gordon.

First off this debate should only occur in bars/pubs after both parties have consumed at least a 6 pack because there is no right answer and the debate could rage on for hours without any resolution. Perfect fodder for the bar (tastes great!!!… less filling!!!).

Maybe the reason Johnson’s accomplishments were never given the respect they deserve was because most of them occurred during the great exodus, when fans were so fed up with all Brian’s changes that their overall view of NASCAR was negative and they were leaving in droves. Someone winning 5 championships in a row didn’t help NASCAR’s cause with those who were becoming disgruntled warm up to the changes. It was just another reason why NASCAR sucked post Brian in their minds.

The other three (PEG)were all making their mark when NASCAR’s stock was rising and the party was raging. Having an impact when everyone is paying attention and everything is good is a lot easier than when people are moving on to the next thing.

If a driver’s impact on the sport is measured by asses in the seat then it’s easy to see why the other 3 are credited with having a greater impact on the sport. Conversely, if during a driver’s tenure the asses in the seats decrease then their impact could be construed as negative (that’s not true at all but subconsciously there may be a correlation). The truth is that P E & G were LUCKY enough to come along during the right time and Johnson was not.

I think Johnson’s stock will rise with time and that history will treat him well.

Johnson’s 7 titles will never EVER carry the same weight as Earnhardt and Petty’s. Johnson scored ALL of his during the NASCAR “charity era”. Wave-arounds, lucky dogs, phantom debris cautions, the Chase, etc etc.

If you go back and revisit all 83 of Jimmie’s wins, you’ll fin at least 30 of them came directly as a result of the NASCAR welfare system. He’s definitely one of the 10-15 greatest drivers we’ve ever had, but his stats are (to me, at least) wildly inflated.

Jeff Gordon’s greatest contribution to the sport was that he brought an entirely new demographic to the sport, away from the traditional Southeast base and without the good ol’ boy image. For that reason alone, I’d say he had more impact than Johnson or Earnhardt who basically had no influence on the structure of the fan base. Although it was before my time, Petty likely had the most impact of all in making the sport relevant.

Although the question was posed as to who had the greatest impact, all the previous answers devolved into arguing who was the “best driver,” which was Not the issue presented.