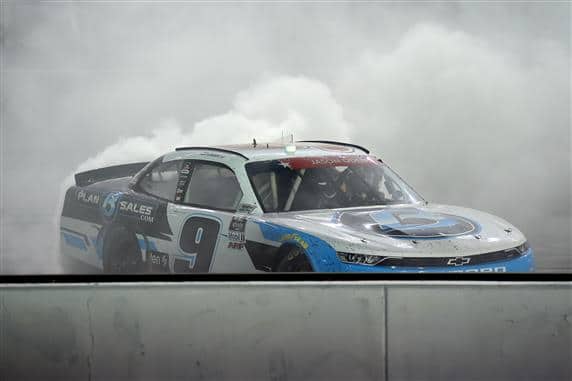 Comcast’s military program is led by Carol Eggert, senior vp, military and veteran affairs. Eggert, who served over 30 years in the Army herself, leads a team at Comcast NBCUniversal that provides strategic leadership to all aspects of programs and outreach engaging the military and veteran community. That includes criteria such as recruiting, hiring and building talent at all levels of the organization.

Recently, Eggert reflected back on her time at Comcast and how she’s grown her team at Comcast, dating back to 2016.

“The first year you try to figure out what the heck you’re doing, and then you bring in a team and learn to work together and execute that strategy,” Eggert told Frontstretch. “You have to be pretty nimble to modify that as new opportunities come along. Just to see that growth and the support of the military community that Comcast leads.

“I would say just the growth of the team has been a very proud moment to watch grow and how we can continue to serve the military community.”

In June of 2019, Eggert hired on Sean Casey as director of communications, military and veterans affairs at Comcast to help with military engagement. Casey recalled being intrigued by the military while attending college at Miami University. Since then, he’s served in the Army for the last 15 years and is currently serving in the Army Reserve.

Casey said he believes the culture and spirit Comcast as shown for the military stems back to Ralph Roberts, founder of Comcast, which in turn wanted to create opportunities for civilians in the military.

“The military has always had a special place for Comcast,” Casey said. “And if we’re going to think about having a military engagement initiative, it really did start with a hiring initiative. Before we can do anything externally, we need to make sure that the workplace is a good place for military members.”

Since starting at Comcast nearly a year and a half ago, Casey said individuals with military backgrounds tend to have skills in which Comcast is looking for in employees. The company prides itself on having a strong work ethic, entrepreneurship, solid teamwork and the ability to have an understanding that the employees’ individual contributions are lending toward the greater good or greater effort.

There’s no better proof of that than this year. 2020 has thrown the world a curveball, with the country being close to shutdown — and all sports being shutdown — in mid-March due to the COVID-19 pandemic. There has also been a lot of social unrest, which led to uproar and riots all over the country. Many military members — mainly National Guard units — were called to duty.

But Eggert said Comcast goes above and beyond for military members when they are in a situation where they need to leave their Comcast job to report for duty, even if it’s on just eight-hour notice.

“We give them 15 days of paid time off for military duties so they don’t even have to worry about coming on and off the payroll,” she said. “They keep all of their benefits; 401K, just like they are still here with us – they’re not even gone so to speak. We notify their supervisors and their team, and if they’re gone for more than those 15 days, we make up the difference in their pay.”

Making up the difference in pay is not a law requirement, as the law only states employers must pay their Guard or reserve.

All of Eggert’s work over the past five years has paid off.

In mid-September, Comcast NBCUniversal was honored with the 2020 Patriots in Business Award for its leadership and commitment to military community teammates and their families. Among those includes military spouses, who often have gaps in their resume because they move frequently to stay with their military spouse.

“Because of its depth and credibility within the community, I’m very proud to be designated as number one, because it isn’t easy to receive that award,” Eggert said. “I think we went from 60-something over the last couple of years to somewhere between six and four, and now because of all we’re doing, we were recognized as number one.”

One of Comcast’s biggest vehicles for military recognition is NASCAR.

Since Comcast as entered NASCAR as an entitlement sponsor of the Xfinity Series in 2015, it’s put together many military-focused programs. Just last year, members of the National Guard were sworn into service at the Xfinity Takeover of Philadelphia in May. Drivers such as Kyle Busch, Brandon Jones and Jeffrey Earnhardt have all ran the Comcast Salute car, and during the race season, Comcast invites local military members to the racetrack on a weekly basis.

Unfortunately, in-person activations were scaled back in 2020 because of the COVID-19 at-track guidelines. Comcast went virtual — across the board — and used that as the recognition of military members.

“When we think about veteran military organizations, or even NASCAR, we still need to be that organization that supports the military community,” Eggert said. “Every organization has figured out a way to do that virtually because the needs of their [in-person] hospitalities have gone away. I actually think we’re busier.”

Just over five months ago at Bristol Motor Speedway, Comcast honored some of its military frontline members by carrying their names as the banner on each car in the Xfinity race.

Happy #VeteransDay to everyone that has defended our freedoms. ??

It was our honor to have veterans & current military members highlighted on the windshields of #XfinitySeries cars in June at @BMSupdates. pic.twitter.com/NQl7pfMCSA

That was a special moment for Comcast, in a race won by Noah Gragson, whose car featured Comcast employee Jason Oden on the car.

“The global crisis had really challenged everyone to step up and prioritize those around us,” Matt Lederer, vp of brand partnerships and activation at Comcast, said. “We knew about these selfless employees that were on the frontlines and felt we needed to shine a spotlight on their efforts as they were making such a significant impact in communities across the country.

“This activation was the perfect opportunity to not only showcase our appreciation, but also give the employees a much-needed morale booster.”

Eggert added that back in January, the plan was to recognize military members at the track, similar to past years. But for Bristol, the company made photographs of the cars and sent them to all of the individuals that were honored.

Not only did the Dash 4 Cash races at Atlanta Motor Speedway (June 6), Homestead-Miami Speedway (June 14), Talladega Superspeedway (June 20) and Pocono Raceway (June 27) provide $100,000 to the winner of each race’s program, but Comcast sent a donation to each market as well.

“Behind the scenes, Comcast continues to build on the pledge to ensure low-income veterans and families have access to the digital tools they need by committing $120,000 in four Dash 4 Cash markets. … That could be something as simple as an Internet connection and access to computers, but also extends into many types of digital training that assists in their transition back into civilian life.”

While Comcast is very supportive of the military, so is NASCAR, showing its support every week. Because of that, Eggert believes other sports can’t live up to NASCAR’s reputation, as those leagues might only show their military appreciation a few days out of the year.

“I’m so impressed and have always been impressed with what NASCAR does all year long [for the military],” she said. “Most of the sports will recognize veterans on Veteran’s Day or in veteran’s month. The [Philadelphia] Eagles just had veterans in for this month, but [NASCAR] does it all year long.

“I think that makes [NASCAR] credible and really committed to the effort. And they don’t do just one thing where they bring in veterans on Veteran’s Day, [they] do it all year long and have a complete embedded program and work with partners.

“I can say yes, NASCAR sets the bar pretty high when it comes to supporting the military community all year long.”

As for 2021, Eggert admitted it’s still uncertain for what at-track activation looks like but hopes it can return to the track at some point. If allowed, Comcast will have a similar outlook as the past and bring in the military units that are local to the track area along the lines of the USO.

Eggert said, “We want to bring people to that really positive environment and working with non-profit partners to bring to the track.”