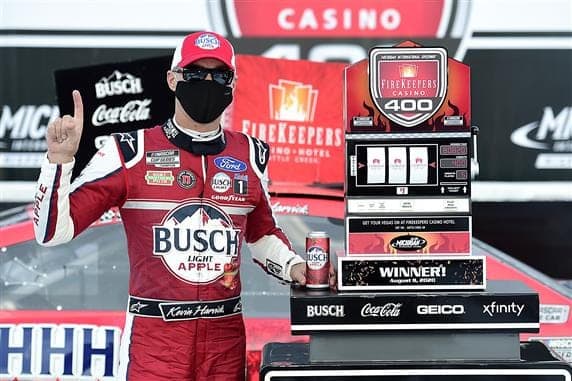 Did You Notice? … NASCAR wasn’t just about the Championship 4 and Chase Elliott‘s first NASCAR title at the ripe old age of 24? Certainly, Elliott’s back-to-back wins to finish the year were impressive; he’s the third-youngest champion in NASCAR history. Elliott’s surging popularity should serve the sport well heading into a time of transition next season.

Chase Elliott's first #CupSeries title has led to the most first-day merchandise sales of any #NASCAR champion in the past decade, a good sign for the racing body as it tries to build its next generation of superstars (@A_S12).https://t.co/C8XSNUnK5y pic.twitter.com/Zvq5j8wM6G

2021 will mark the first year running a number of NASCAR Cup Series races on the current schedule and the last with the current chassis and handling package. But before launching into a new frontier, we should close the book on several storylines outside the Championship 4.

Here’s a closer look at a few accomplishments (and failures) teams and drivers will remember about 2020.

Did You Notice? … Before taking off, I want to take a moment to thank all my loyal readers who have followed my columns another year at both Frontstretch and Athlon Sports. Your loyalty and feedback are always appreciated, especially during a year it was difficult to even focus on NASCAR considering all that’s going on in the world. You’ve kept this website growing with your unwavering support, and we have high hopes for 2021 after another year of growing our audience.

Keep it tuned right here every Wednesday (I’ll be popping in now and then) along with every other day during the NASCAR offseason. We’ll keep working, delivering the stories you expect from us, while the 2021 Daytona 500 edges ever closer. It’s just 95 days away!

Nice overview of the past year.

Glad you got a chance to reference the Montoya wreck with the track dryer. Always a good laugh and something that will make highlight or blooper reels for years.

I don’t know which is more perplexing, Johnson’s rapid fall or Harvick’s rise. Neither should have happened statistically.

For me, the shot of Jimmie and his girls in front of his car this weekend tells the tale. You take a down period for HMS as a whole, combine that with his age and the never ending changes in the race package, and then throw in the tiny thought in the back of his head while driving about making sure he gets safely home to them.. and that’s all it takes to drop a few tenths per lap.

So what does that say about Harvick?

Rhetorical question or no? Ha! I’d say Kev really only cares about one person in the world.. but that’s not fair to him (because I don’t like him!). SHR has been very strong over the same period, so a little easier on that front. Plus Kev’s youngest is still only what – 3?.. will get harder as they get older

I don’t like him either so that’s the answer I was looking for. LOL

harvick’s son is racing Hilary, so next harvick driver learning the ropes. His daughter is also interested in racing.

with covid kevin has been able to be at track with Keelan and also on baseball field.

I think it has to do more with the car than the driver.

Thanks Tom. Thanks to all at Frontstretch.

JGR will have to do a little forensic work over the off-season to figure out why they weren’t more dominant in 2020. While it was true that Hamlin won several races and made the “Final 4”, his performance in the latter stage of the “Playoffs” showed he had lost some speed leading into the penultimate race. Martin Truex Jr. ran well early in the season, stuck around a bit in the “Playoffs”, but only won a single race in 2020. Kyle Busch, who is arguably the most talented driver in NASCAR & defending Cup Champion, suffered a long losing streak that was only snapped after he had missed out on the 2nd-round of the “Playoffs”. Erik Jones failed to win a race, or make the “Playoffs”.

Next year JGR will be replacing Erik Jones with Christopher Bell, but how short a “leash” will Bell have if the #20 team repeats the mediocre performance of 2020? Kyle Busch will probably be getting a new crew chief and perhaps a new crew. Truex will have to be looking over his shoulder in 2021 because Gibbs has been quick to pull the plug on fading star drivers (see: Matt Kenseth). Thanks to a banner year in 2020 and tight relationship with FedEx, Hamlin is safe for the next couple of seasons, but could he see another slump in 2021?

They will be back. They failed a ton of inspections this year – meaning they found the gray area and eventually NASCAR started catching up (and paying closer attention). The 9 car HMS brought to Phoenix was new, and pushed all the rules in every area they could find during the year – thus the failed inspection. NASCAR catches 3 of the 10 cheats – and then lets them race with the other 7 undetected. The game goes on and on..

LOL! How are those sour grapes tasting?

I cheer for both Kyle and Chase and thoroughly enjoyed both season-ending championships. The conspiracy theories just add a touch of humor.

Excellent – considering I’ve been an HMS and Chevy guy for 30+ years. I just call them like I see them.. It’s a lot like the election – most people are “ok” with questionable ethics in an election if their candidate “wins”. I’m not ok with it. People with morals, values and ethics are a dying breed in this country – and the country suffers for it.

More funny stuff! Keep it coming. We all need a laugh.

Thank you for proving my point!

“Questionable ethics”? That’s hilarious! At least Brad Keselowski didn’t lie down at the entrance to Victory Lane and pound his fists on the pavement and demand a do-over. He just threw his team under the bus and let it go at that. But you enjoy yourself with your baseless conspiracy theories and outright lies, if that’s what you need to get through the night.

A bit defensive there – did I perhaps strike a nerve?

No, sweetie, you aren’t capable of striking anything. Just another pathetic swing and miss. Now take some warm milk and your meds and drift off to dreamland.

easy on jo jo, reality slips in and out. sometimes jo jo is a famous scribe, sometimes a Kevin or kyle fan. next year jo jo will once again be a forever fan of whomever the champion is. I’d love to be a little bird during jo jo’s next session.

I keep asking for proof, but poor “Echo” cannot provide any, because none exists. Take your delusions elsewhere. Maybe medication would help you. A mind is a terrible thing to lose.

Meaning to reply to Jo with the previous.

Poor jo jo, age is slipping in again. Sad that now your throwing Harvick under the bus after picking him week after week the last few years. I guess jo jo isn’t enough for ya at home, but becoming a fantasy kyle fan, after the fact, seems just right for your mo. la di da tip toe through the tulips.

Echo, I don’t know what drugs you are taking, but I’ve never been a Harvick fan. I cheered for Bill Elliott, then Kyle Busch, now Busch and Chase. And I haven’t throw anybody under the bus – but you seem to be breathing in a lot of exhaust fumes to be so thoroughly confused SMH!

Echo, I don’t know what drugs you are taking, but I’ve never been a Harvick fan. I cheered for Bill Elliott, then Kyle Busch, now Busch and Chase. And I haven’t throw anybody under the bus – but you seem to be breathing in a lot of exhaust fumes to be so thoroughly confused SMH!

repeating yourself is a sign you should follow up on during your next session. sometimes aging is a slow process, but some slip in and out of reality and don’t even realize it. poor jo jo. but hey, if your happy then keep on believing whatever it is today. lol I bet a year from now you are a forever fan of that champion too. keep it up, your on a happy roll.

How about you prove that I’ve ever been a Harvick fan? I know that’s asking a lot of someone who has selective memory, but just find one instance in any previous article’s comments where I’ve said I was a fan of his. Or are you slipping into that slow (or in your case, advanced) process of aging? Or maybe you are having trouble with understanding. English as a second language, perhaps?

However, I guess in the current climate, any fool can allege anything totally lacking in credibility and still expect people to believe it, even the POTUS. Why should an addled NASCAR fan like you be expected to any different? You are simply confused and that is a very worrisome sign indeed.

Looks like we have a resident douche bag here at the site now. That should provide hours of entertainment.

Normally I avoid feeding the trolls, but the off season can get boring.

Yeah, it’s starting to look like we will all be spending a lot of time at home with the way the Covid deal is going right now. It will be nice to have a diversion. Like I said, hours of entertainment,,,, And it’s free!!!!