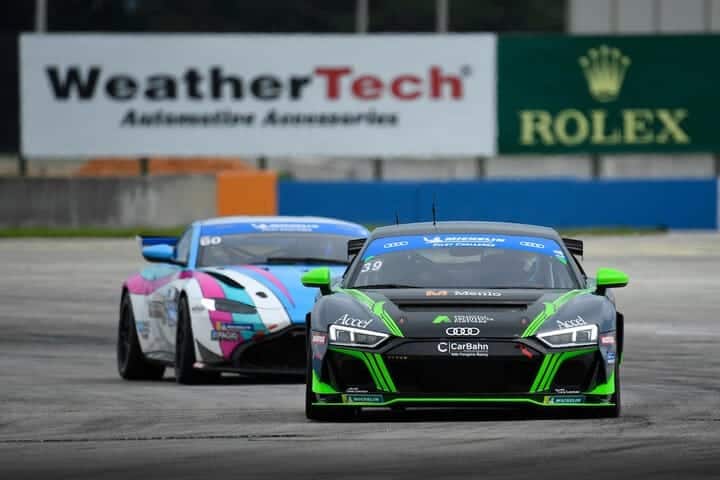 After a season-low 25 cars took the start on Halloween at WeatherTech Raceway Laguna Seca, there will be 36 cars entered for Friday’s Michelin Pilot Challenge two-hour season finale.

The Grand Sport class will have 24 cars doing battle.  Turner Motorsport will be back with both of their cars.  Last time out, the No. 96 was withdrawn after Vin Barletta crashed in practice.  Bill Auberlen ceded his place on the grid in order to allow Barletta to race.

At Winward Racing, a couple of changes have been made.  The ADAC GT Masters season wrapped up last weekend at Oschersleben in Germany.  That allows regular drivers Indy Dontje and Philip Ellis to return to the team, replacing Nico Bastian and Alec Udell.

Automatic Racing, LAP Motorsports and M1 Racing LLC (also known as NTe Sport) are back as well.  The M1 team is still using the Porsche that the team borrowed from Archangel Motorsports after the team’s McLaren was totaled in a crash at Michelin Raceway Road Atlanta.

Marco Signoretti is currently listed as driving the Multimatic Motorsports No. 22 Ford Mustang GT4 alongside Sebastian Priaulx.  This was a seat that was apparently supposed to go to Hailie Deegan.  We’ll keep an eye on this one to see if it changes.

Stephen Cameron Racing is back for a rare appearance with their BMW M4 GT4.  Greg Liefooghe will drive the car with his Pirelli GT4 America SprintX teammate Sean Quinlan.  Dillon Machavern will be back in the No. 80 BMW for BimmerWorld Racing to replace Liefooghe.

At Murillo Racing, Justin Piscitell will be in the No. 65 Mercedes in place of Kenny Murillo.  He’s fresh off a victory in an MX-5 Cup race at Circuit of the Americas.

In TCR, there are 12 cars currently entered.  Copeland Motorsports is back for their second start of the year with the teenaged duo of Tyler Maxson and Tyler Gonzalez.  In addition, Van der Steur Racing has entered a Hyundai Veloster N TCR of their own, making six in the field.  This is a team that previously competed in the American Le Mans Series’ LMP2 class.  Rory van der Steur, a kart racer, and Danny Formal will drive.

The Alan Jay Automotive Network 120 is scheduled to go green at Noon Friday.  The race will be streamed live on NBC Sports’ TrackPass service.