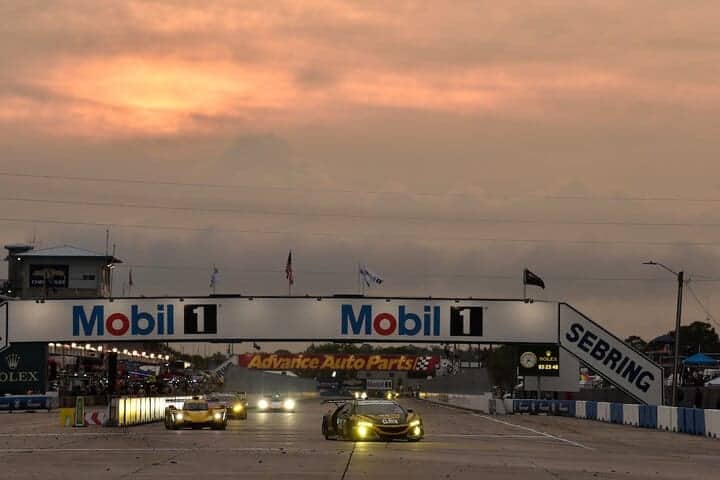 This Saturday, the IMSA WeatherTech SportsCar Championship wraps up their season with the 68th Annual Mobil 1 12 Hours of Sebring at Sebring International Raceway.  This race was originally planned to be in the traditional mid-March slot, but the shutdown put the kibosh on that.  Instead, the race is running during what was originally planned as the as Encore weekend as the season finale.  31 teams will take on the bumpy 3.74-mile circuit for 12 hours this weekend.

In the DPi class, there are eight cars entered.  Since Sebring is an endurance event, you have a number of part-time competitors returning to the series.  Loic Duval is back in the No. 5, while INDYCAR regulars Simon Pagenaud, Alexander Rossi and Ryan Hunter-Reay will compete.

Currently, the only question mark is with JDC-Miller MotorSports in their No. 85 Cadillac DPi-V.R.  They have an empty slot alongside Matheus Leist and Stephen Simpson.  Gabriel Aubry is unavailable since he will be racing in Bahrain on Saturday.

The LMP2 class will have four teams doing battle this weekend and a number of driver changes.  Tower Motorsport by Starworks is back, but Job van Uitert is not.  He’s been replaced by David Heinemeier Hansson, who drove with the team in the Rolex 24 at Daytona back in January.

Performance Tech Motorsports has another completely revamped driver lineup.  The new lineup consists of Guy Cosmo, Patrick Byrne and Don Yount.  Cosmo has a bunch of experience in sports car racing, but most of his prototype experience pre-dates the Grand-Am/ALMS merger.  For Byrne, Saturday will mark his prototype debut and will only be his second career start in the IMSA WeatherTech SportsCar Championship.  His only previous start in the series was in an Audi R8 LMS GT3 for Flying Lizard Motorsports back in 2015 at then-Mazda Raceway Laguna Seca.  He finished ninth in class.

Byrne and Cosmo are longtime co-drivers, having raced together in Byrne’s aforementioned race in 2015 and last year in Pirelli GT4 America SprintX.  They were supposed to race full-time this year in GT World Challenge America powered by AWS for K-PAX Racing in a Bentley, but the ongoing COVID-19 pandemic put an end to that program after Circuit of the Americas in March.

In the case of Yount, he’s the only one of the three drivers that has driven the team’s ORECA 07-Gibson this year.  He was part of the team at the Rolex 24 at Daytona in January.  He spun during the final practice session, hit the tires and put the car on it’s side.  He was ok and good to race, though.

Inter Europol Competition is back in cooperation with PR1 Mathiasen Motorsports to run the No. 51 ORECA 07-Gibson.  Jakub Smiechowski is back, but he’s got new teammates.  Replacing Rob Hodes and Austin McCusker are Matt Bell and Naveen Rao, the recently crowned IMSA Prototype Challenge champions.  Bell will be making his first start in the WeatherTech SportsCar Championship since 2017 with the now-defunct Stevenson Motorsports.  It’ll also be his first start in a prototype since 2011.  For Rao, Saturday will mark his IMSA WeatherTech SportsCar Championship debut.

GT Le Mans has six teams entered.  For the most part, there are few changes, except with Porsche GT Team.  Getting drivers to the United States with a number of countries locking down in Europe has been an issue.  At first, it looked like they were going to run the race with just their four full-time drivers.  That is something that used to be the norm in GT classes at Sebring into the late 1990s, but not anymore.

On Monday, Porsche announced a five-driver lineup for the race.  Neel Jani will join the team for the weekend as the third driver for the No. 912.  Earl Bamber has been listed as a driver for both cars.  He will be a busy man on Saturday.  Also, the team will have a special paint scheme for their final race as a factory team in IMSA.  That will be unveiled Tuesday.

The GT Daytona class will have 13 cars doing battle this weekend.  GRT Grasser Racing Team will once again have two cars on the property.  In addition to the full-time GRT Magnus Lamborghini, they’ll have the No. 11 back for more action.  The trio of Richard Heistand, Steijn Schothorst and Franck Perera will drive.  All three competed for the team at Daytona in January.

AIM Vasser Sullivan has switched their third drivers for this weekend.  As a result, Michael de Quesada will be in the No. 12 Lexus while Kyle Kirkwood will drive the No. 14.

Hardpoint Motorsports makes a couple of changes as well.  Spencer Pumpelly is back with GRT Magnus, so Andrew Davis is in to replace him.  Markus Winkelhock, who drove with the team at Michelin Raceway Road Atlanta, will be competing in the GT World Challenge Europe powered by AWS Endurance Cup season finale at Paul Ricard this weekend.  In his place, the team has tapped Pierre Kaffer to drive.

Heinricher Racing with MSR Curb-Agajanian’s Alvaro Parente also has to miss the season finale due to commitments in Europe.  In his place will be Joey Hand, who will be making his first start of the season.  Hand previously was part of Ford Chip Ganassi Racing’s factory Ford GT program.

Riley Motorsports has a clash of their own.  Regular third driver Ben Keating is committed to race in Bahrain on Saturday.  As a result, the team has tapped Marc Miller to replace him.  Miller has competed this season for Gradient Racing as part of a WeatherTech Sprint Cup effort.  He previously raced under the Riley banner part-time when the team (via Keating) were running SRT Viper GT3-Rs.