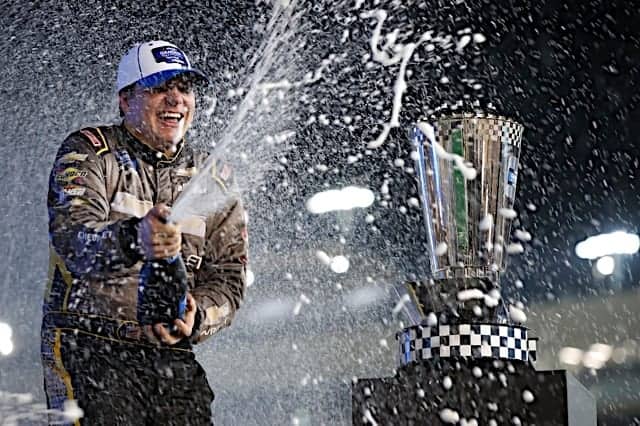 In this week’s edition of the Frontstretch Podcast, Dustin Albino and Mike Neff discuss NASCAR’s championship weekend at Phoenix Raceway, which saw the youth movement takeover the sport.

Chase Elliott became the third youngest Cup Series champion, dominating the race after starting in the back. The duo discusses what this means for Elliott’s confidence level, as he’s proven he can win in pressure scenarios, two weeks in a row.

Meanwhile, Brad Keselowski‘s pit crew arguably cost him a shot at the championship, with three bad stops. Joey Logano was quick early but fell off late, while Denny Hamlin came up short again.

Oh, yeah, it was Jimmie Johnson‘s final race as a full-time NASCAR driver, so the duo discusses some of its favorite moments from the seven-time champion’s career, along with his top-five run on Sunday. Don’t forget about Clint Bowyer and Matt Kenseth, both of whom are likely done with full-time competition.

Austin Cindric won the Xfinity Series champion, edging ahead of Justin Allgaier on a late-race restart. Justin Haley continued to overachieve, finishing third in the championship standings, as Chase Briscoe had a frustrating race, his nine-win season ending with fourth in points.

In the Gander RV & Outdoors Truck Series race, Sheldon Creed used a late caution to take fresh tires, catapulting him from ninth to the lead in one lap, hanging on for the final lap to win the championship. However, his GMS Racing teammate Brett Moffitt sounded off on crew chief Chad Norris, so we discuss if that was fair or foul.

Finally, Creed joins the show to relive winning the championship, if it’s sunk in and why it’s important to take his time moving up the NASCAR divisions.