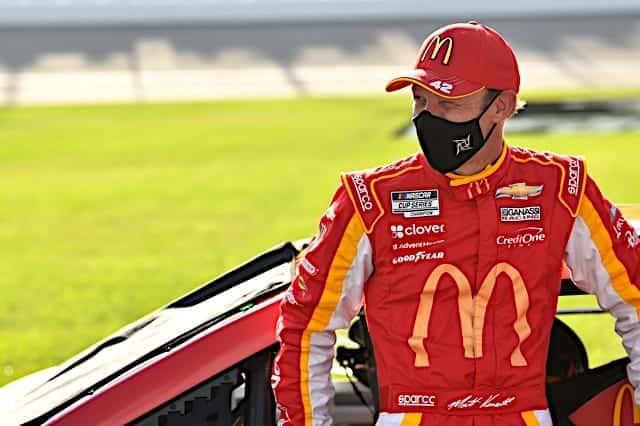 Who is the driver of the year?

While Chase Elliott is the champion, undoubtedly the best overall driver this season was Kevin Harvick.

Harvick also set a couple of statistical records this season. The 2014 champion ended the season with 35 top-20 finishes, the most of the modern era. Harvick’s lone blemish in the category was 26th in the June race at Homestead-Miami Speedway.

This 99.97% mark is the highest in NASCAR history, at least for drivers making at least 30 or more starts in a season. Earlier this season, I wrote a Frontstretch 5 column detailing five practically unbreakable records. If that column ever gets a sequel, this feat will definitely be on it.

Harvick was consistent in 2020, but he could also win. His nine Cup wins this year was the most for any driver in a season since 2008, and it’s always a good sign when a driver has a winning percentage of 25% in a season.

While Harvick failed to make it to the Championship 4, it’s hard not to crown him the best overall driver this season.

What was the biggest disappointment?

After Kyle Larson decided to say a racial slur during a mic check for an iRacing event, the search was on for Chip Ganassi Racing to find a replacement. Its goal was pretty simple: find a new driver that can compete for wins and, most importantly, be good enough for sponsors Credit One and McDonald’s.

It’s unknown how many drivers CGR reached out to, just two that we know for sure. One was Carl Edwards, who retired after the 2016 season. Edwards considered the offer but turned it down.
The other driver? The team’s eventual choice, Matt Kenseth.
Kenseth, the 2003 Cup champion, hadn’t driven in NASCAR since a part-time effort in 2018 with Roush Fenway Racing. While some, chiefly stats guru David Smith, did not buy Kenseth being able to compete anymore, plenty did. Heck, this column touched on the subject and thought that he’d be just fine after a month.
Racing is a weird sport. It’s hard to really decide when a driver is washed up. Bobby Allison, Harry Gant and Mark Martin found success at the Cup level into their 50s. Meanwhile, Johnson, who runs marathons and probably had the best diet/workout regimen possible to maximize his performance, stopped winning at 41.
Kenseth won at Phoenix Raceway late in the 2017 season. He performed well in 2018 relative to his other RFR teammates. There was this thought that, well, that would be enough.
It wasn’t enough.
Kenseth struggled mightily throughout the year, with his worst-ever average finish while running the majority of races. In 32 total starts, Kenseth had just two top-10 finishes; a 10th in his first race back at Darlington Raceway and a surprising second at Indianapolis Motor Speedway.
After retiring in 2005, Rusty Wallace probably regretted the decision, believing he still had a couple more years left in the tank. Kenseth’s 2020 season is what may well have ended up happening if Wallace had returned without anything in that tank.
The good news for the Wisconsin native, though, is that this year changed nothing for him in the grand scheme of things. When folks discuss Ricky Rudd, few bring up his 2007 season as a negative. Still, it was disappointing to see Kenseth struggle to even compete for top 10s in his big return.
Who was the prospect of the year?
Was there really anybody but Sam Mayer who could be named here? Mayer won in everything he sat down in this season at some point and seemed unstoppable in ARCA Menard Series East.
That series had only six events this season due to COVID-19, but Mayer won five of them, a 1.2 average finish. And just to throw fuel on the fire, Mayer went out West early in the season and dominated at the Las Vegas Motor Speedway bullring.
In a season in which the much-hyped Hailie Deegan struggled to compete for wins in the ARCA Menards Series, Mayer zoomed to five and only had one finish outside of the top four in that series. If Mayer had been able to compete for that championship and not been age-restricted, there’s an extremely good chance the 17-year-old would be the ARCA champion.
Mayer backed all of this ARCA success up in September, when he won his very first NASCAR national touring series race in the Gander RV & Outdoors Truck Series. It’s no wonder that JR Motorsports announced near the close of the season that Mayer will drive its No. 8 in the second half of 2021 and full time in 2022.
The only thing that could stop this kid from being a Cup winner eventually could be if his ego gets in the way of his driving, and that’s a problem a lot of young talent can run into once they move up and can no longer win every single race they enter.
What are the remaining awards?
Biggest Surprise: Cole Custer wins Cup Series race at Kentucky Motor Speedway.

“Oof” of the Year: Larson saying a racial slur on an online stream.

Story of the Year: Bubba Wallace’s arc from losing a sponsor over iRacing to feuding with the President of the United States (!) on Twitter to driving for Michael Jordan.
Best Idea: Neon under-glow at the All-Star Race.
Race of the Year: Chase Briscoe holds off Kyle Busch in an Xfinity Series race at Darlington in May.
Crew Chief of the Year: Justin Alexander for winning Texas on a strategy call and producing a great season with Austin Dillon.
Racing Series of the Year: Xfinity.

I am with you on that WJW.

This should have been instituted when they stopped letting lapped cars line up on the inside lane on restarts. No way a guy in 4th should be at a disadvantage to a guy in 9th at a track like Martinsville. At least this gives each driver a choice in their destiny. It was also implemented without too many issues or controversy.

Based on expectations and team performance, I’d say it’s a toss up between Erik Jones and Jimmie Johnson

Kenseth was awful. Putting somebody like Ross Chastain in the car would have been a better idea. Kenseth now has the dual distinction of being the reason for the “Chase” and having the worst comeback in NASCAR history.

Just wondering Don, why was that a bad idea? What is it that you don’t like about it?
I really am curious and not just trying to be a smartass.

I don’t like the idea of a driver picking up 5 or 6 positions because the drivers ahead picked the other lane. If a driver is in sixth position on the restart he should restart in sixth position when the green flag waves. Then again, it seemed to work for Bubba.

Harvick had the best season in most statistical categories. But the way he crapped the bed in the Round of 8 and then made no attempt to redeem himself at Phoenix, I’m no longer sure I would call him the “best driver” at the end of the day. In spite of a lousy season, Kyle Busch at least made the effort to win after he had been eliminated. How many drivers won at a 1.5 mile track, a 1.0 mile track, a short track and the road courses? Maybe the “best driver” actually DID win the Championship.

There is a difference between the best team during the regular season and the team that plays the best in real playoffs. If a team like the Packers or Patriots lose their quarterback for the last half of their regular season, get him back as a wild card team for the real playoffs and win the Stupor Bowl, does that mean they don’t deserve to be champions? If you look up “stupor” it fits the last ten examples of Brian’s product.