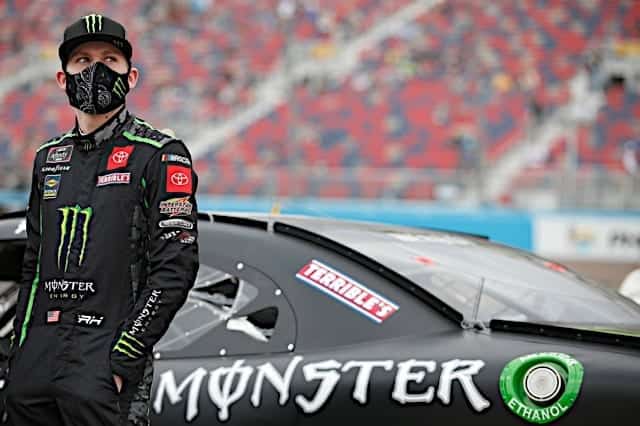 Riley Herbst will move to Stewart-Haas Racing in 2021 to chase the NASCAR Xfinity Series championship, multiple sources have confirmed to Frontstretch.

Linked to SHR for several weeks, the Las Vegas native will takeover the No. 98 car left vacant by Chase Briscoe as he moves to the Cup Series full time.

Herbst is coming off a rookie season at JGR that saw him score four top-five and 17 top-10 finishes in 33 races. He earned a best finish of second on two occasions, first at Auto Club Speedway at the end of February and the first race of the Kentucky Speedway doubleheader in early July.

The 21-year-old is taking over for a team that won nine times, the most for a single organization in 2020, and is coming off a Championship 4 appearance last weekend. Dating back to 2018, SHR has placed one car in the championship race since 2018.

On Oct. 20, Tony Stewart, co-owner of SHR said, “We’ve got a couple prospects that nothing is done yet to announce, but we’ll keep working on our end. We definitely plan to continue the Xfinity program. We obviously see the value in it as you see with the [Briscoe announcement], so we plan to continue down that path.”

Herbst is scheduled to be one of just two full-time Ford Performance drivers in Xfinity, as Austin Cindric will return to the series to defend his championship with Team Penske.

What a disappointing choice for such a great ride. There are so many talented drivers out there that wouldn’t wreck cars every week like this guy does. But money talks.

Riley will do so much better while handling a Ford next year. Great driver choice SHR.

If Tony Stewart has picked this young man to drive his car, then he obviously has complete confidence in his ability to be very successful next year…GOOD LUCK SHS!!

I’ll give Riley credit for making a move like this, if it’s going to happen. Knowing that SHR will have a full-time ride for him is a big plus. I’ll be watching to see how he does with a full schedule next year. Sometime down the line, he could emerge as the person to take over the 4 when Harvick decides to retire.

I can’t understand why more teams don’t run Ford. They are always up there in the front or near the front

I really think it is also a bad choice. Although it is the car to beat 98 but looks like desperation for Stewart Hass to seat the ex 18 driver just let go by Gibbs. Was it any other choice there?

I love the move for Riley Herbst, he’s got great tanacity and ive seen some very smart moves on the race track, give him the 98 team is a no brainer,i’ll be proven correct with big wins for SHR. WATCH, his talent will shine this season. Im support the Xfinity series and i have other favorites as well ,so im not just being biased toward SHR ,but i will omit that my all time favorite driver is Tony Stewart because ive been a lfe long fan of stock cars and indy car racing

SHR Why not try for Zane Smith. He also seems to be an awesome driver with great potential

He probably doesn’t have the funding for that ride. He could only muster 10 races or so with Junior in 2019. What a shame.