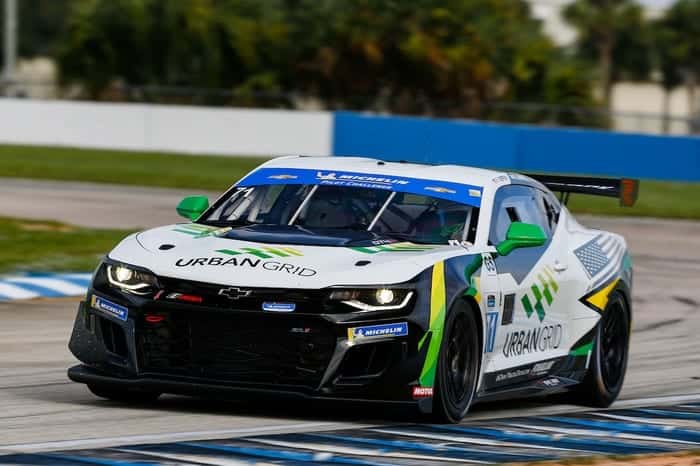 Friday saw Rebel Rock Racing dominate the time sheets with the sole Chevrolet Camaro GT4.R on the premises.  Robin Liddell turned in the fastest lap of the day early in the morning at 102.176 mph.  That held up through the afternoon to be the quickest lap of the day.

In the morning practice session, Liddell turned in the quick lap of the day 20 minutes into the session.  Liddell’s lap was half a second faster than Archangel Motorsports’ Trent Hindman in his chartreuse Aston Martin.  Robby Foley was third quickest in the No. 95 Turner Motorsport BMW, while BGB Motorsports’ Jan Heylen was fourth.  Tom Dyer in CarBahn Motorsports with Peregrine Racing’s No. 93 Audi was fifth overall.

Jeff Westphal in the No. 39 CarBahn Audi was sixth quickest, followed by the Mercedes of Winward Racing’s Indy Dontje.  Stephen Cameron Racing’s Greg Liefooghe was eighth in his BMW, then Riley Motorsports’ Dylan Murry.  Multimatic Motorsports’ Sebastian Priaulx was 10th quickest in the fastest of the Ford Mustang GT4s.

Kyle Marcelli was 12th fastest in his KohR Motorsports Aston Martin.  During the session, the car briefly stopped on the Ullmann Straight before resuming.  Also, Motorsports In Action’s McLaren failed to set a competitive time.

TCR saw the Hyundais once again top the charts.  Points leader Gabby Chaves was quickest with a lap at 98.299 mph, good for 24th overall.  Chaves’ lap was a quarter of a second faster than teammate Mark Wilkins in the No. 21 Hyundai.  Roadshagger Racing’s Jon Morley was third in his Audi, while KMW Motorsports with TMR Engineering’s Tim Lewis Jr. was fourth in the Alfa Romeo Giuletta TCR.  Copeland Motorsports’ Tyler Gonzalez was fifth quickest.

In the afternoon session, Liddell was once again fastest with a lap at 101.880 mph, a little slower than in the morning.  Liddell’s lap was an eighth of a second faster than Tyler McQuarrie in CarBahn Motorsports with Peregrine Racing’s No. 39 Audi.  Cameron Lawrence, who was tapped to drive this weekend in place of Bill Auberlen, was third quickest.  Priaulx was fourth, while Heylen was fifth.

Hindman was sixth, followed by Marcelli and Dyer.  Jaden Conwright, a regular in the Porsche Supercup Series making his series debut, was ninth in the M1 Racing LLC/NTe Sport Porsche.  BimmerWorld Racing’s Dillon Machavern was 10th.

In TCR, Lewis. was quickest with a lap at 98.574 mph, good for 25th overall.  Lewis’ lap was two-thirds of a second faster than Bryan Herta Autosport’s Mason Filippi.  Wilkins was third fastest, while Fast MD Racing’s James Vance was fourth.  Chaves was fifth quickest.

Qualifying for the Alan Jay Automotive Network 120 is scheduled to begin at 5 p.m. Thursday afternoon.  We’ll have a recap of the session here at Frontstretch.