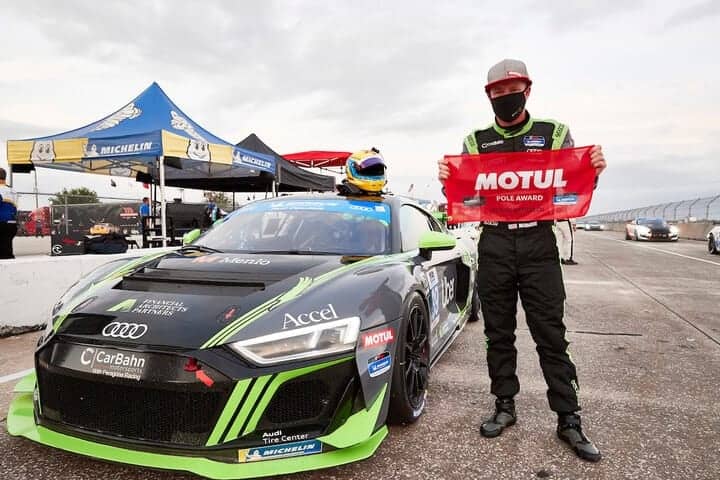 CarBahn Motorsports with Peregrine Racing’s Tyler McQuarrie and Jeff Westphal entered Sebring 15 points behind KohR Motorsports’ Kyle Marcelli and Nate Stacy.  Basically, Marcelli and Stacy win the title if they finish 11th or better.  McQuarrie needed to give himself a boost to have any chance at defending his championship on Friday.  He got it.

McQuarrie came right out when the track went green and made a statement, turning in a lap at 102.980 mph to win the pole for Friday’s Alan Jay Automotive Network 120.  It is the fastest lap of the weekend in Michelin Pilot Challenge competition, but not a new track record.

McQuarrie’s lap was nearly a full second faster than Turner Motorsport’s Cameron Lawrence.  Lawrence got the late call-up after Bill Auberlen was forced to sit out the weekend due to a possible COVID-19 exposure.

Multimatic Motorsports’ Marco Signoretti will start third in his Ford Mustang GT4, followed by Jaden Conwright in his series debut.  Stacy will start in fifth.  Of note, Marcelli and Stacy hold the tiebreaker in the points thanks to two second-place finishes to McQuarrie and Westphal’s one.

The Wards will start sixth and seventh with Bryce beating out his son Russell.  Riley Motorsports’ Jim Cox starts eighth, while Rebel Rock Racing’s Frank DePew and Motorsports In Action’s Sheena Monk round out the top 10.

In TCR, Bryan Herta Autosport swept the front row with their Hyundai Veloster N TCRs.  Harry Gottsacker put the black No. 21 on pole with a lap at 98.920 mph, good for 21st overall.  Gottsacker’s lap was one-eighth of a second ahead of Ryan Norman in the red No. 33.  Norman and teammate Gabby Chaves have a four-point lead over teammates Mason Filippi and Michael Lewis.  If either team runs into trouble, Roadshagger Racing’s Gavin Ernstone and Jon Morley will be in position to pounce.

Two teams failed to post official times during the session.  Stephen Cameron Racing’s Sean Quinlan did go on-track during the session and set a time.  However, that time was more than 25 seconds off the pole.  He then pitted and the Cameron team touched the car.  That is a no-no in IMSA.  If a crewmember touches the car during the session, then all times are disallowed.

In TCR, Atlanta Speedwerks’ Robert Noaker did not venture onto the track.  As a result, Noaker will start his Honda Civic Type-R TCR from the rear of the field.