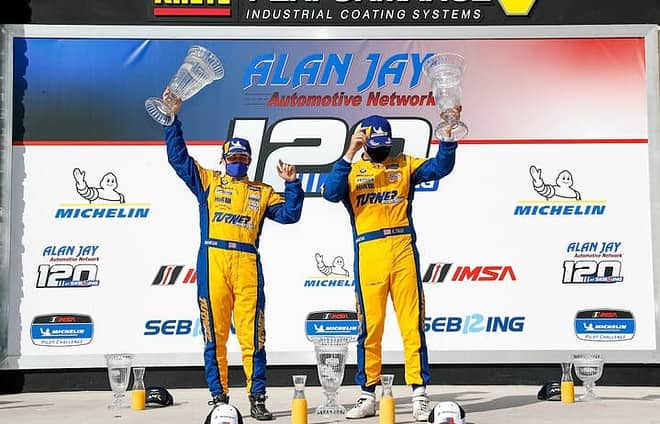 Turner Motorsport’s No. 95 BMW M4 GT4 with Robby Foley and Cameron Lawrence claimed overall victory in the Alan Jay Automotive Network 120 Friday afternoon (Nov. 13) at Sebring International Raceway.  It is Foley’s third win of the season and the first for Lawrence.

“I had to fill [Bill Auberlen‘s] shoes today [as the closing driver],” Foley said in victory lane.  “We got Cameron Lawrence to drive and he did exactly what we needed him to do.  I had to manage some fuel to the end, which was a little tough, but overall, a great day for all of our guys.”

As Foley noted, Lawrence was a last-minute call-up for Turner Motorsport.  Auberlen withdrew himself from the weekend Wednesday due to potential exposure to COVID-19.

Auberlen spent a couple days in Phoenix prior to the race weekend with a friend.  On the way to the airport to fly to Florida, Auberlen’s friend called him and told him that he had tested positive for COVID-19.  Out of caution, Auberlen cancelled his flight and immediately went to get tested.  Luckily, after two days of isolation, Auberlen’s results came back negative.  While Lawrence replaced Auberlen in Michelin Pilot Challenge competition, he’ll be replaced in Saturday’s Mobil 1 12 Hours of Sebring presented by Advance Auto Parts by Nick Yelloly.

For Lawrence, it was a bit of a rush just to get to Sebring.

“Will [Turner] reached out to me Wednesday morning,” Lawrence explained to NBC Sports’ Dillon Welch.  “I didn’t know any details or anything, so I booked a flight [just in case].  At 2:30 Wednesday Central time, I found that I needed to be here.  Got the last flight out of Austin and got into Orlando at Midnight.  Got about four hours of sleep before I was in the car.”

Entering the race, KohR Motorsports’ Kyle Marcelli and Nate Stacy had a 15-point lead over CarBahn Motorsports with Peregrine Racing’s Tyler McQuarrie and Jeff Westphal.  A 10th-place finish was all that would be required to win the championship.

McQuarrie proved early that he had one of the best cars out there.  However, the fuel capacity cut to 75 liters for the Audi R8 LMS GT4 that was made prior to the FOX Factory 120 in October reared it’s head once again.  With the pace laps and long straights at Sebring, the team was right up against not being able to make it to the 40-minute mark before running out of fuel.

McQuarrie quickly ran out to a decent lead before backing down a little to save fuel over Lawrence.  Ultimately, the fuel saving wasn’t necessary.

27 minutes in, Winward Racing’s Bryce Ward and Murillo Racing’s Tim Probert collided on the run to the hairpin.  Both drivers spun and hit the wall to bring out the race’s only full course caution.  The wall contact moved a couple of concrete wall sections, resulting in a prolonged yellow so that heavy equipment could push the barrier back into the proper position.

The lengthy yellow resulted in the minimum drive-time being met.  Most of the leaders pitted here for fuel, tires and a driver change.  McQuarrie chose to stay out.  Those who pitted were led by Lawrence in fifth.  Only a few laps after the restart, Lawrence was already back up to second.

McQuarrie pitted to put Westphal into the car 55 minutes in, squarely placing themselves on an alternate pit strategy.  Lawrence took the lead until he stopped with 45 minutes remaining for his final stop.  Here, Foley got in the car.

When the pit stops finished up, Foley ended up back in the lead with Archangel Motorsports’ Trent Hindman in second and Marcelli in third.  Meanwhile, problems hit Westphal’s Audi.  Westphal was forced to pit with 50 minutes remaining, outside of their pit window.  A few laps later, mechanical gremlins ended their day, clinching the title for Marcelli and Stacy.

The team that pitted the latest was Rebel Rock Racing with Robin Liddell at the wheel of their Chevrolet Camaro GT4.R.  Liddell, who was fastest in both practice sessions Thursday, drove like a man possessed over the final half-hour of the race, moving himself up to second overall.

Liddell was running down Foley, who had spotted himself a big lead over the rest of the pack.  However, an unscheduled stop in the final couple of laps dropped Liddell out of contention.  That allowed Foley an easy run to victory.

Foley and Lawrence’s margin of victory was 15.347 seconds over Archangel Motorsports’ Hindman and Alan Brynjolfsson in their Aston Martin.  Marcelli and Stacy finished third, more than enough to win the Grand Sport championship.  Motorsports In Action’s Corey Lewis and Sheena Monk were fourth, while Riley Motorsports’ Jim Cox and Dylan Murry were fifth.

Also of note, due to Auberlen’s withdrawal, Foley chose to only drive the No. 95 BMW.  He was also entered in the No. 96 with Vin Barletta.  With Foley sticking to the No. 95, Barletta drove the full two hours solo and finished on the lead lap in 12th overall.  The problem with that is there is nothing in the IMSA Michelin Pilot Challenge regulations that allows this.  A couple of hours after the race, the No. 96 was moved to the rear of the field.

In TCR, Bryan Herta Autosport’s Ryan Norman and Gabby Chaves entered the day with a five-point lead over teammates Mason Filippi and Michael Lewis.  However, Filippi and Lewis were eliminated from championship contention in the first corner.

At the start, contact was made between Filippi and Spencer Brockman that resulted in Brockman spinning out.  The contact resulted in a cut right front tire for Filippi.  The young racer hustled to get back to the pits and damaged the suspension in the process.  By the time Filippi got around to the support pits exiting turn 16, the right front corner of the car was bent significantly, resulting in multiple laps lost.  The No. 98 did get back on-track seven laps down.  They would eventually finish those same seven laps down, 11th in class.

On the first lap, Norman was able to get past pole sitter Harry Gottsacker to take the lead.  Copeland Motorsports’ Tyler Gonzalez followed up into second, but then ran in the back of another car, damaging the front end of the No 27 Hyundai.  A pit stop dropped Gonzalez four laps down.

Norman led until the race’s one and only caution.  During that yellow, a number of teams including the BHA No. 33 pitted for their first stops of the race.  It was before the 40-minute mark, so a driver change was not made, but fuel and tires were taken.

Norman’s stop put KMW Motorsports with TMR Engineering’s Roy Block in the lead.  The Alfa Romeo has been quick, but fragile in 2020.  That proved true once again as Block began having shifting problems.  That allowed Norman to run down the Alfa and retake the lead.

Norman continued to lead until he made his second and final pit stop on lap 28.  Gottsacker had pitted a lap earlier and handed over to Mark Wilkins.  Norman’s stop to hand over to Chaves was a little slow, allowing BHA’s black Hyundai to jump the red Hyundai and take the lead.  Roadshagger Racing’s Jon Morley was third and appeared to be just as fast as the Hyundais.  However, a broken suspension part in the right front corner forced Morley to retire with nine minutes remaining.

Norman was able to run down Wilkins in the closing laps for the win.  However, Morley’s presence in third meant that had Chaves made the move on Wilkins (and made it stick), it would have cost Gottsacker and Wilkins second in points for the year.  When Morley retired, it meant that the pressure was off.  Chaves tried over the last few laps, but could not prevent Wilkins and Gottsacker from taking their second win of the season.

The margin of victory was just under a quarter of a second between the two BHA Hyundais.  The second-place finish was more than enough for Chaves and Norman to claim the TCR championship.

Highlighted coverage of Friday’s race is scheduled to premiere on NBCSN Nov. 24 at 4 p.m.

Phil Allaway has three primary roles at Frontstretch. He's the manager of the site's FREE e-mail newsletter that publishes Monday-Friday and occasionally on weekends. He keeps TV broadcasters honest with weekly editions of Couch Potato Tuesday and serves as the site's Sports Car racing editor. Outside of Frontstretch, Phil is the press officer for Lebanon Valley Speedway in West Lebanon, N.Y. He covers all the action on the high-banked dirt track from regular DIRTcar Modified racing to occasional visits from touring series such as Tony Stewart's Arctic Cat All Star Circuit of Champions.
Previous Josh Reaume’s Suspension a Reminder That Ignorance Has No Bounds
Next Slipstream Saturday: Lance Stroll Claims First Career F1 Pole at the Turkish Grand Prix 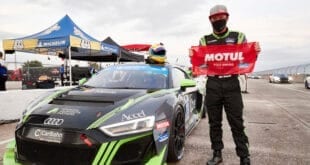 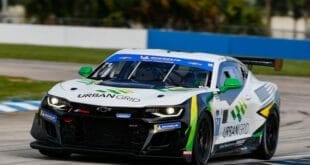 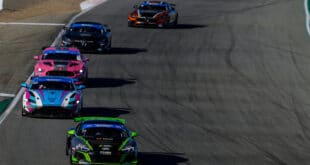