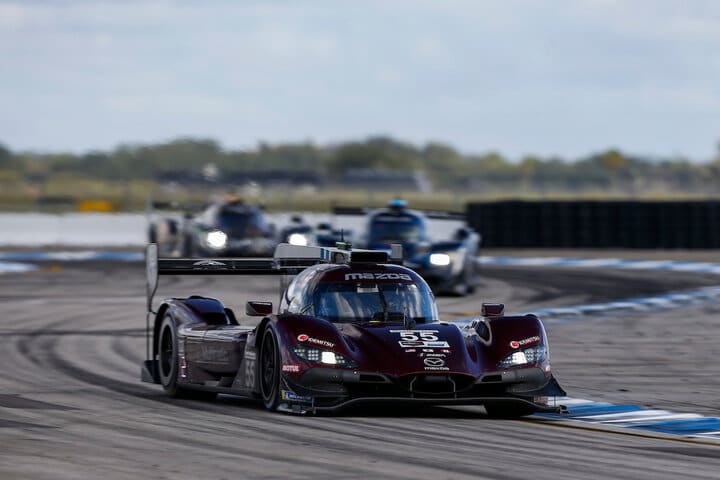 The Mobil 1 12 Hours of Sebring presented by Advance Auto Parts Saturday (Nov. 14) was a rough-and-tumble affair.  Being in the right position to take advantage of others’ misfortune was key.  Mazda Motorsports was in position to score a one-two finish, but Oliver Jarvis cut his left rear tire with 28 minutes to go.  That allowed the No. 55 Mazda of Harry Tincknell, Jonathan Bomarito and Ryan Hunter-Reay to take the lead.  From there, they held on to take victory.  It is the first victory in an endurance race for Mazda since the factory team moved into the top class in 2014.

“Our strategy was just to get the tenth hour with a clean car that we can go fight with at the end,” Tincknell said after the race.  “We did that well. I went for a massage and we were P5, by the time I finished the
massage, Ryan [Hunter-Reay] had got us [to second].  It set us up well for the end.  Obviously, getting the car 25 seconds down for the last two stints, I was pushing like crazy to try to close the gap but it wasn’t really happening for us.  At that point. I started thinking, ‘a [one-two finish] would be great.’  Then, I heard the news that the 77 had a puncture.  Obviously, I feel for them.  It’s always tough.”

The championship battle was big on Saturday as three teams had the chance to walk away with the title.  Ricky Taylor and Helio Castroneves for Acura Team Penske and Wayne Taylor Racing’s Ryan Briscoe and Renger van der Zande were both in an effective dead heat entering the race, while Action Express Racing’s Pipo Derani needed to win to claim the title.

All three championship contending teams ran into trouble.  Ricky Taylor led until the first round of pit stops.  The stop was fine, but about a lap afterwards, the No. 7 Acura lost boost.  A stay in the garage for intercooler repairs dropped the team seven laps down.  They would finish eighth in class and fail to make up any of the laps.

That put WTR in the catbird seat.  Trouble struck for them in the fifth hour when Scott Dixon spun in turn 10 after contact from Jarvis.  The right rear tire was cut in the process.  Dixon crawled back to the pits, but not before the tire ripped apart and took part of the bodywork with it.  While that drew a caution, the team had to go behind the wall for repairs and dropped five laps.

The race was likely going to come down to a duel between Acura Team Penske’s No. 6 and Action Express Racing’s No. 31 Cadillac.  However, things got chippy in the 10th hour.  Juan Pablo Montoya was able to take the lead away from Derani.  Derani came back and dove to the inside at the hairpin.

Some spicy ? moves in DPi battling for the lead.#IMSA / #Sebring12 pic.twitter.com/ajZ9oY93b3

Unfortunately, Derani ended up going wide.  Montoya reassumed the lead and gave Derani a hip check that put the Whelen Cadillac in the grass.  This angered Derani.

IMSA penalized Derani for avoidable contact, but Derani had already lost the lead to Mazda Motorsports’ Olivier Pla before serving the penalty.  A couple of laps after the penalty, Derani was forced to pit with a steering issue that ultimately cost him two laps.  That ended Derani’s championship chances and gave the title to Castroneves and Ricky Taylor.

The result of the Acura-Cadillac confrontation was that Mazda Motorsports’ entries ended up running one-two.  Pla was able to pull away from Hunter-Reay and open up a decent advantage.  Jarvis was holding steady until the left rear tire went down and littered the track with debris.  Tincknell was able to run down the stricken Jarvis and make the pass in Sunset Bend right when the yellow was being displayed for debris.

The caution closed the pack back up for a 17-minute sprint to the finish.  Once the race restarted, Tincknell was able to pull away from the pack to take the win.

The margin of victory was 10.154 seconds over Acura Team Penske’s Montoya, Dane Cameron and Simon Pagenaud.  Jarvis, Pla and Tristan Nunez were able to finish third after their late issues, while JDC-Miller MotorSports’ Scott Andrews, Matheus Leist and Stephen Simpson were a lap down in fourth.  JDC-Miller MotorSports No. 5 Cadillac for Sebastien Bourdais, Loic Duval and Tristan Vautier were fifth.

LMP2 was once again dominated by PR1 Mathiasen Motorsports’ Patrick Kelly, Scott Huffaker and Simon Trummer.  Kelly started from the class pole and immediately pulled away from the rest of the pack.  He was able to put the other three cars in class a lap down in the first hour.  That advantage eroded away with pit stops.

Eventually, Inter Europol Competition was able to get themselves into the class lead, but everything fell apart late in the fourth hour.  Jakub Smiechowski spun on his own entering Sunset Bend and hit the tires.  That brought out a full course caution and put the No. 51 behind the wall.  Smiechowski They would eventually return to finish fourth, 20 laps down.

Following the crash, the PR1 Mathiasen Motorsports ORECA 07-Gibson moved into the lead and led the rest of the way from there to take the win.  The margin of victory was two laps over the Tower Motorsport by Starworks entry shared by John Farano, David Heinemeier Hansson and Mikkel Jensen.  Performance Tech Motorsports’ Guy Cosmo, Patrick Byrne and Don Yount were third.

In GT Le Mans, the championship was wrapped up at WeatherTech Raceway Laguna Seca two weeks ago.  That was a real relief for Corvette Racing as both cars had terrible days.

In the third hour, the No. 4 Corvette with Oliver Gavin at the wheel had a fluid leak on the Ulmann straight which turned the track into an all-skate that swung the GT Daytona class.

Townsend Bell, who was leading GT Daytona at the time, wiped out and crashed into the tires.  Teammate Kyle Kirkwood spun the championship-leading No. 14 Lexus and did the same.  Kirkwood was then tapped by the spinning Hardpoint Motorsports Audi of Rob Ferriol.

While Ferriol was able to continue without losing a lap, both Bell and Kirkwood ended up being the wall.  The team was able to repair the No. 12 and get that car back on track after replacing the radiator.  However, the No. 14 Lexus was more heavily damaged and was retired on the spot, ending the championship chances for Aaron Telitz.

That resulted in a 20-minute stay in the pits for repairs.  Later on, the left rear suspension failed entered Sunset Bend, which pitched Gavin into the wall.

The championship-winning No. 3 Corvette of Jordan Taylor and Antonio Garcia was not immune to the issues as well.  In the 10th hour, the No. 3 suffered a left rear suspension failure.  Luckily, it occurred at a place where the car wasn’t loaded.  As a result, Jordan Taylor was able to drive it back to the paddock.  18 minutes later, they were back on-track.

The race was looking like it would go in the direction of BMW Team RLL’s No. 25 until the final restart.  Here, Riley Motorsports’ Lawson Aschenbach, in a battle for the GT Daytona lead, ran in the back of Connor de Phillippi entering turn 5.  This spun de Phillippi out and damaged the BMW.

The incident gave the class lead to Porsche GT Team’s Nick Tandy.  Despite being very fast for much of the weekend, the Porsches struggled for pace for much of the race.  However, they were in position to benefit from the incidents.

Tandy was able to hold on to give himself, Earl Bamber and Frederic Makowiecki their second win of the year.  The margin of victory was 9.025 seconds over the No. 912 Porsche of Bamber, Neel Jani and Laurens Vanthoor.  BMW Team RLL’s John Edwards, Augusto Farfus and Jesse Krohn were third, while de Phillippi, Colton Herta and Bruno Spengler had to settle for fourth, one lap back.  Jordan Taylor, Garcia and Nicky Catsburg were nine laps down in fifth.

GT Daytona saw Wright Motorsports’ Patrick Long and Ryan Hardwick start the race with a thin chance at the title.  Third driver Jan Heylen started from pole and led early.  However, the team dropped back after a left rear shock broke on the Porsche.  That made the car quite difficult to handle in right turns.

A number of other teams that led ran into serious issues.  GRT Grasser Racing Team led early, but suffered a driveshaft issue leaving the pits.  A stint in the garage put them out of contention.  As noted above, AVS Vasser Sullivan’s day (for both cars) was ruined by fluids in Sunset Bend.

In the second half of the race, Scuderia Corsa’s Ferrari shared by Cooper MacNeil, Alessandro Balzan and Jeff Westphal came to the front to do battle with the point leading Acura from Michael Shank Racing with Curb-Agajanian.  Even with the shock issue, Long was still right there.  Balzan and Mario Farnbacher had a fierce battle for the lead with plenty of casual contact before Balzan won out.  Farnbacher’s car began to fade in the final couple of hours.

The final restart decided GT Daytona in addition to GT Le Mans.  When Aschenbach got in the back of de Phillippi and spun him out, Westphal ended up being put off-course in the process.  That briefly gave Aschenbach the class lead.

However, IMSA didn’t take kindly to the contact.  An avoidable contact drive-through penalty was assessed to the Riley Motorsports Mercedes.  The contact damaged Aschenbach’s car, leading to an eventual retirement in the final 10 minutes.

The Aschenbach-de Phillippi contact and resulting off-course excursion for Westphal resulted in Long getting the lead back.  From there, he was able to hold on to claim the win.  It’s the first win of the year for Wright Motorsports and the first career victory for Hardwick.

Wright Motorsports’ margin of victory was 3.27 seconds over The Heart of Racing’s Roman DeAngelis, Ian James and Darren Turner.  Meyer Shank Racing with Curb-Agajanian’s Farnbacher, Matt McMurry and Shinya Michimi ended up third, which was enough to give them the GT Daytona championship.  Farnbacher defends his championship from last year, while McMurry takes his second in a row (he won the LMP2 championship in 2019).

MacNeil, Balzan and Westphal ended up having to settle for fourth after their off-course excursion.  Hardpoint Motorsports’ Ferriol, Andrew Davis and Pierre Kaffer recovered from their early incident to finish fifth.