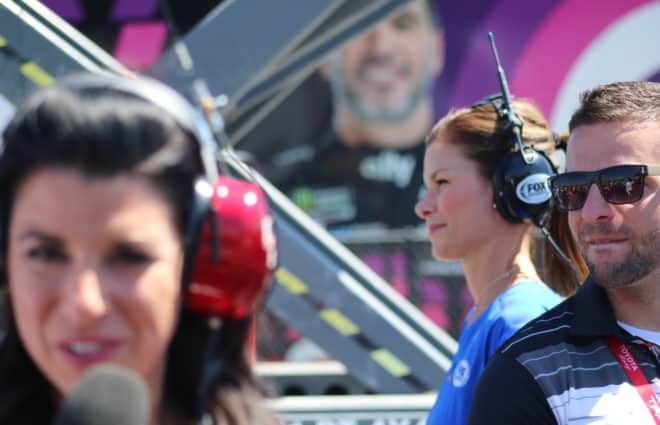 With the offseason underway for most (but not all) series, we’re starting to hear about a number of driver changes and teams moving around. TV is not immune to that type of action.

Monday saw FOX Sports announce that Jamie Little will serve as the play-by-play announcer for the ARCA Menards Series races that will air on FOX Sports 1 and/or 2 in 2021, replacing Dave Rieff. She will be the first woman ever to hold such a role in the United States for a major racing series.

“I am beyond excited and humbled to be offered this role for the ARCA Menards Series,” Little said in a press release.  “Although I’ve always preferred to be viewed as a motorsports broadcaster and not solely as a female broadcaster, it is an honor to be the first in this role. I definitely don’t take for granted being the first at anything. I know it can open other opportunities for women in the future, and I hope the younger girls aspiring to cover racing see the sky is the limit.”

Am I surprised at this move? Honestly, not really. This is the trajectory that Little appeared to be on last year. You might remember that FS1 had Little in the booth for some practice sessions as far back as 2018. At first, it was a sub role for here, but it later expanded into a couple more practice sessions last year. Those were designed for Little to get her feet wet. Had the COVID-19 pandemic never happened, you would have seen more of that this year.

As it stands, she’s going into a booth role for 10 races next year, starting with the AMS season opener in Daytona. Right now, the 2021 AMS schedule has not been released, so I couldn’t tell you which additional races that Little will be calling. Daytona is the only guarantee, but most (if not all) of the others will likely be races run in support to the NASCAR Cup Series. She’ll be partnered in the booth with Phil Parsons, while Katie Osborne will continue for a second year in her role as a pit reporter.

Hard to believe that Little’s been working on race broadcasts for the better part of 20 years, but it’s true. She’s worked as a pit reporter on NASCAR broadcasts since 2007 and worked INDYCAR broadcasts before that. In a pit reporter role, it’s rather difficult to figure out what someone is going to be like in the booth. From the brief time that I’ve seen Little up there with the practice session broadcasts, I think she’ll work out fine. ARCA broadcasts probably provide the least pressure for someone that’s just starting out in the broadcast booth. It’ll serve as a nice venue for Little to figure out what works for her and what doesn’t.

She’ll also have the advantage of not working with someone that would constantly interrupt her. Parsons is a knowledgeable analyst with 20 years of booth experience. He got where he is today by being analytical and courteous. He knows his position as an analyst and would be more than willing to help out Little. You aren’t likely to get shenanigans with him. In other words, this won’t be a Danica Patrick situation.

Little is someone that’s not afraid to educate herself. She’ll be able to take advantage of all of the same perks that her colleagues get. She’ll have DVDs of the broadcasts she works on delivered to her so that she can study up and figure out things that she can improve. She’ll have people at FOX Sports sending her notes. I don’t know how the first race in Daytona is going to go for her, but my expectation is that she’ll improve as the year continues on.

For the AMS, this actually might be a shot in the arm for them. I don’t know if there was all that much to look forward to in the 2021 season for them prior to this announcement. The 2020 ARCA season was one of the roughest ones that I can recall. Car count was horrible for much of the year and many of the races were just plain uncompetitive.  2021 might be that and more. Having Little on the broadcasts could bring in some extra viewers at first for curiosity’s sake, but I have no doubt that she wants to be more than just that. It could be a tough season as far as the on-track product goes.

The past couple of years have seen Rieff on play-by-play with Parsons. I generally liked Rieff when he was on play-by-play for FOX Sports’ NHRA coverage, but he was rather underwhelming on ARCA races. I feel like he really wasn’t all that knowledgeable about ARCA and FOX Sports’ decision to do all their ARCA races remotely didn’t help (in contrast, MAVTV does all their races on-site).

I look forward to what Little can do in the broadcast booth in 2021. I’m not going to expect her to be perfect. I do expect her to grow into the role as time goes by. 10 broadcasts aren’t really that much, but it’s collectively a little more than 20 hours of hands-on experience. Doing play-by-play for the AMS in my eyes is far from being a game-changer, but if Little does well here it could be a springboard to bigger and better things.

While Little is looking at a more prominent role in 2021 (she will still be pit reporting for Cup, Xfinity and Camping World Truck series races as well), FOX Sports has also bid farewell to two personalities. Ricky Craven announced his retirement from broadcasting way back in April, but made his final appearance on FS1 last Tuesday night. I feel that this is a bigger loss for FOX Sports than they realize since Craven did well at explaining things in a way that everyone understood. He came off like the smartest guy in the room, especially during the time he spent at ESPN after the races left the network. That was when he was making regular appearances on SportsCenter as their NASCAR expert.

Even though Craven really wasn’t at FOX Sports all that long (since the beginning of 2019), he did make an impact. The final regular episode of NASCAR RaceHub for 2020 featured a number of tributes to Craven.

I feel like RaceHub will be hurt by Craven’s absence next year, but I also feel like at FOX Sports he would have never gotten to where he probably could have gotten. Remember that at ESPN, he was a part-time race analyst, most notably with the standalone Xfinity races alongside Marty Reid (before Reid got fired). At the time, I thought Craven was good enough to be an analyst for Cup races. That chance never came.

In an interview with the Bangor Daily News, Craven indicated that he felt like he didn’t want to overstay his welcome and didn’t want to come off as a liability. Basically, he needs to be able to enrich a show with his presence. He can’t just be there.

On the other hand, Alan Cavanna announced Friday that he was told with four weeks left in the season that FOX Sports would not retain him for 2021. With pretty much no open positions at the moment, this will mean that he’s likely out of NASCAR for 2021.

This is a really bad move as Cavanna served as FOX Sports’ sole pit reporter for much of 2020 for the Gander RV & Outdoors Truck Series races. Since the booth only traveled to the first two races of the year, Cavanna served as the commentators’ eyes and ears. He did an excellent job covering the series from the pits. It was only late in the season that FS1 saw fit to send someone else (often Little) to supplement Cavanna’s work.

It just goes to show in the couple of years that Cavanna has served as an on-air reporter in the series (and as a reporter for outlets such as NASCAR.com previous to that) that he has achieved a fair bit of respect and praise. Just looking at the above tweet and the 600-plus comments it received is a sign of that.

I only had the pleasure of meeting Cavanna once, at Watkins Glen in 2018 when it rained during the Xfinity Series practice sessions and almost no one went on track. He’s a legitimately friendly person that’s easy to get along with. He also has some very interesting stories from his time as a local news reporter.

What’s going to happen for pit reporting in the Trucks in 2021? I’m not sure right now, but my best guess is that for the first half of the season, FOX Sports will put their Cup/Xfinity pit reporters on Truck races on a revolving basis. Beyond that? I’m not really sure. Things might be quite a bit different by then. Let’s hope so.

That’s all for this week. Next weekend sees MotoGP wrap up their season at Portimao in Portugal. Meanwhile, the Trans-Am Series presented by Pirelli will be in action at Michelin Raceway Road Atlanta. Away from the track, NASCAR is having a small awards ceremony on TV Wednesday night. TV listings can be found in the TV tab above.

As I noted in last week’s edition of Couch Potato Tuesday, the original plan for today’s piece was to talk about NBC Sports’ broadcast of the Mobil 1 12 Hours of Sebring presented by Advance Auto Parts. The Little news and writing about other personalities made it impossible to fit that in today. Not to worry though. We’ll cover the Sebring broadcast in a second critique on Wednesday.

Next week, we’ll finally break down the NBC Sports portion of the season. How was the coverage overall? Did NBC Sports’ strategy with the pandemic work better than FOX Sports’ setup?

Phil Allaway has three primary roles at Frontstretch. He's the manager of the site's FREE e-mail newsletter that publishes Monday-Friday and occasionally on weekends. He keeps TV broadcasters honest with weekly editions of Couch Potato Tuesday and serves as the site's Sports Car racing editor. Outside of Frontstretch, Phil is the press officer for Lebanon Valley Speedway in West Lebanon, N.Y. He covers all the action on the high-banked dirt track from regular DIRTcar Modified racing to occasional visits from touring series such as Tony Stewart's Arctic Cat All Star Circuit of Champions.
Previous John Hunter Nemechek, Front Row Motorsports Part Ways
Next Chip Ganassi Racing To Return to IMSA With Cadillac