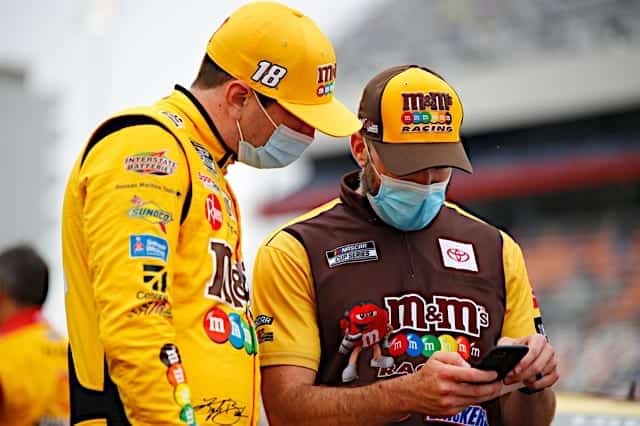 Joe Gibbs Racing has announced a crew chief shuffle between the NASCAR Cup Series and the NASCAR Xfinity Series for 2021.

Harrison Burton, who recently re-signed with JGR, will have veteran crew chief Jason Ratcliff on top of the pit box. Ratcliff was with the No. 95 Leavine Family Racing team before it closed at the end of the 2020 season.

The other two Xfinity teams will have the same crew chief as they did in 2020. Dave Rogers, who was the crew chief for Riley Herbst, will be on top of the pit box for the 2021 season for the No. 18 car with Daniel Hemric behind the wheel. Also returning, Jeff Meendering will be the crew chief for the No. 19 car as Brandon Jones looks to improve on his sixth-place finish in the standings.

Two drivers on the Cup side will still have the same crew chief in 2021. Chris Gabehart will return with Denny Hamlin and the No. 11 team and James Small will return on top of the pit box of the No. 19 of Martin Truex Jr.

Ben Beshore gets a promotion up to the Cup Series, as he will crew chief the No. 18 of Busch for the 2021 season. Beshore was Burton’s crew chief in the Xfinity Series, racking up four wins last season.

Adam Stevens, who was Busch’s crew chief last season, will be with Christopher Bell in the No. 20.