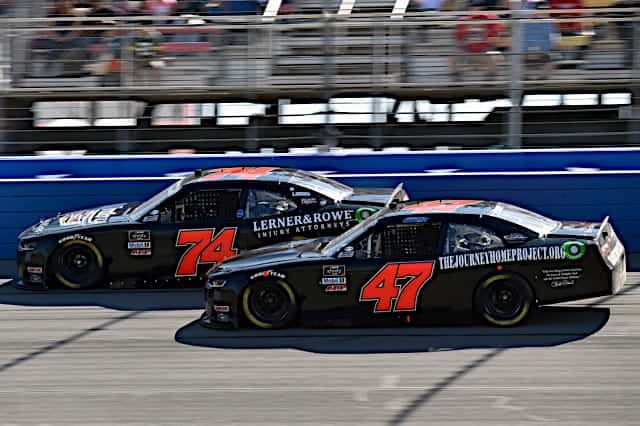 Mike Harmon Racing is coming off its first full season of running two full-time teams in the NASCAR Xfinity Series, and team owner Mike Harmon confirmed to Frontstretch the team will field those two teams again in 2021.

According to Harmon, Bayley Currey and Kyle Weatherman will return to the team as well, with Currey in the No. 74.

“The plan is to run two cars; I’m not sure how the driving part is going to go,” Harmon tells Frontstretch. “We’ll see what happens. Bayley and Kyle are still going to drive; I’m not sure how much I will yet. Money dictates all of that.

In 2020, Currey drove for MHR in 26 races, scoring a best finish of 12th at Texas Motor Speedway in October. The Texas native scored a team-high nine top 20s, including three of the final four races of the season.

Currey says he believes the team’s potential is high, especially if he’s given the nod to run the duration of the 33-race schedule.

“Hopefully I can do the full season,” Currey says. “I think we have a good chance – if we can be consistent and have good runs like we had towards the end of the year, all year, I think we can be a candidate for the playoffs. I think if we can make same progression that we made this year and carry that into next year, we might not make the playoffs but I think we’ll be in the conversation. And definitely want to go for the top 20 in driver and owner points.”

Currey confirms he talked to Harmon ahead of the final race of the season at Phoenix Raceway about running the full schedule and is working on finding additional sponsorship for 2021. But even without bringing much funding to the table in 2020, he was the primary driver.

“A lot of the races this year, I would bring tire money here and there, but I was pretty much just in the car because he wanted me there for the majority of the year. We’ve got to go over it again, and he’s got to figure out some stuff this offseason.”

Statistically, MHR is coming off its best season to date, including its first top-10 finish, eighth, coming at Kentucky Speedway with Weatherman. Running Richard Childress Racing chassis that were a few years old, the team scored a total of 22 top-20 efforts in 65 starts, as opposed to having just four in its first 253 starts.

Harmon admits that he spent more money on tires in 2020 than he had the previous three seasons combined. That was available due to the team finding additional sponsorship dollars.

“You’ve got to stay within your budget to stay in business and whatever you’ve got left, that dictates how fast you can run,” Harmon says. “We had some decent finishes, didn’t crash as much, that will also allow you to have more time and money.

Harmon adds there could be times in 2021 where the team fields three cars in a given race, if the opportunity presents itself. In addition to Currey and Weatherman, he said he believes Gray Gaulding (who made one start for the team at the Charlotte Motor Speedway ROVAL) and Joe Nemechek (who made eight starts) — similar to 2020 — could be potential drivers for the team next season.