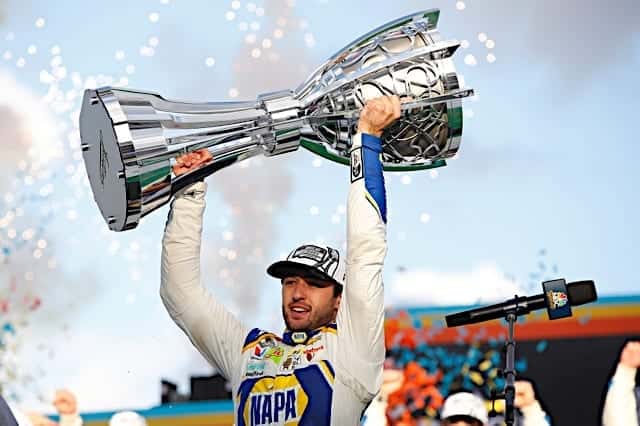 Despite COVID-19 canceling the traditional NASCAR awards banquet, the series was still able to put on a ceremony recognizing champions, drivers and influential industry members from the 2020 season.

The 2020 NASCAR Awards Ceremony was televised on NBCSN on Wednesday, Nov. 18, with country music singer Chris Stapleton starting the show with a performance from his studio. His performance was followed by a message by NASCAR President Steve Phelps reflecting on the 2020 season and thanking the fans for their support.

In the first year of the new NASCAR title sponsor package, sponsors Busch, Coca-Cola, Geico and Xfinity were recognized as the 2020 Marketing Achievement Award winners.

The manufacturers champions were honored as well, with Chevrolet winning the title in both the NASCAR Gander RV & Outdoors Truck Series and NASCAR Xfinity Series, while Ford took the honors in the NASCAR Cup Series.

The Sunoco Rookie of the Year winners were celebrated as well, with Cole Custer taking home the honors in Cup, Harrison Burton winning it in Xfinity and Zane Smith grabbing the award in Trucks.

A special segment was dedicated to seven-time champion and 83-time Cup winner Jimmie Johnson, who concluded his full-time NASCAR career at season’s end. In addition, Johnson was presented the Bill France Award of Excellence, an honor that has been given to many household names in the sport. Clint Bowyer was also recognized for his career achievements as he concluded his full-time career as well in 2020.

The NMPA Most Popular Driver Award for Cup went to 2020 champion Chase Elliott, his third straight selection for the award. Justin Allgaier was named the Most Popular Driver in Xfinity for the second consecutive season, and Smith earned the honors in Trucks.

Each series champion was brought onto the show to be recognized for their successful 2020 campaigns. Sheldon Creed celebrated winning his first Truck championship, and Austin Cindric was honored for his first Xfinity title.

The night concluded with an appearance by Elliott, who reflected on the 2020 season and earning his first Bill France trophy, the award for the Cup champion.

NASCAR returns in February with its annual crown jewel kickoff at Daytona International Speedway, with the Daytona 500 scheduled to take place on Feb. 14.

Congrats to chase elliott,glad to see you following in your dad’s footsteps. Congrats and thanks to jimmie johnson for the memories a true champion

I watched and thought they did a great job with the presentations, considering the circumstances. Congrats to Chase and all the other winners! I was skeptical, but NASCAR did pull off a pretty great season.

Any bets against Chase winning 7 Chase titles? Or will NA$CAR give him 8?

Nascar almost ruiend raceing when they took the Confederate flag from us and gave Bubba. So much power and no apology so wrong we are all equal try not to forget…

The Man
Reply to  Ronald A Bovee

Ronald, you sound like a bigot and a racist. Please sign off and go somewhere else with your BS.