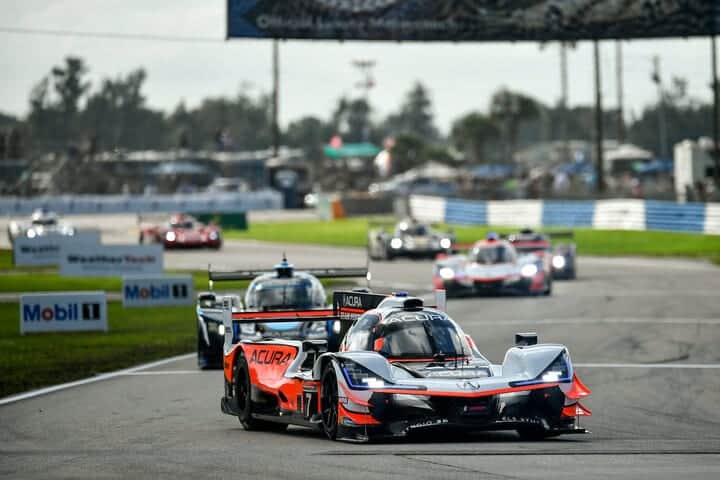 Today, we’re going road racing.  Unlike NBC Sports’ NASCAR and INDYCAR coverage, the IMSA broadcast booth never went to the track after the shutdown.  The only difference here is that it was likely the plan all along, even without a pandemic.

Given that this was a 12-hour race, NBC Sports did not use the same on-air personalities for the whole race.  A team of 12 between booth commentators and pit reporters were on tap for the broadcast.  The regular booth of Leigh Diffey, Calvin Fish and AJ Allmendinger were on the call from NBC Sports’ studio in Charlotte.  They were relieved by Brian Till, Kevin Lee and James Hinchcliffe.  A team of pit reporters were on-site in Sebring, including Townsend Bell, were in the pits.  Bell was also driving in the event.  Honestly, after his crash in the third hour, you didn’t hear all that much from him.

This is seemingly the first year in a long time in which the entire race was actually on television.  The race started with five hours of coverage on NBCSN, then three on NBC before moving back to NBCSN for over four and a half more hours of coverage.  Previous years have seen large chunks of the race exclusive to streaming, or outright not even aired.  Last year saw the race start on CNBC before having a two-hour stint exclusive to NBCSports.com and/or the NBC Sports App.  The remainder aired live on NBCSN.

Championship coverage was substantial Saturday in Sebring.  Unlike the NASCAR coverage from Phoenix, it didn’t completely dominate the broadcast.  That said, there was still plenty of points as they run checks in the scoring pylon.

You still got battles for position that didn’t necessarily affect the championship chase.  I will say this.  In the GT Daytona class, I hadn’t even thought about the Wright Motorsports Porsche even being in championship contention at all prior to the race.

Having said that, there were multiple occasions in which there was discussion that seemingly ignored issues on the track.  Examples of this include when the race’s first yellow was thrown.  I know, it’s a debris caution from when John Farano went wide in Sunset Bend and clipped the tire curtain.  The curtain loosened some bodywork that flew off on the pit straight.  Thing is, it shouldn’t be five minutes before said caution is acknowledged on air.

When it came out, NBCSN was interviewing Helio Castroneves in the paddock after the No. 7 Acura had an intercooler issue.  Obviously, since Castroneves (and teammate Ricky Taylor) were right in the championship conversation and had led the first 40 minutes of the race, it was big news.  They ignored the yellow and went through a full commercial break before acknowledging the yellow.  Pretty ridiculous.

Another example of this was when Jordan Taylor’s left rear suspension broke in the 10th hour.  The booth was too busy going on and on about the chances of team orders (which I despite being used) that they seemingly didn’t notice Taylor’s issues.

Shortly afterwards was the battle that this race will probably be best remembered for.  That would be the duel between Juan Pablo Montoya and Pipo Derani.

First, Derani ran down Montoya and made a dive for the lead at the hairpin.  Unfortunately, he went in too hot and went wide.   As noted on the broadcast, this was an unsuccessful version of the moves that he made in the final minutes to win at Sebring in 2016.

What escalated this is the fact that Montoya made contact with Derani and put him in the grass.  While I doubt that Montoya did that intentionally, he held his line.  The move ticked Derani off.

Less than a lap later, Derani dove to the inside at turn 5, which isn’t really the best place to try to pass.  Derani was barely alongside and Montoya took the turn like he normally would.  Derani went to the grass to try to pass and ended up spinning out Montoya.

The result of that was a penalty for avoidable contact and a stay in the pits due to a mechanical issue that resulted from the contact.  Given the recent tension between Acura Team Penske and Action Express Racing over the past month, it’s no surprise that NBCSN tried to tie these shenanigans to the disagreements that started back at Michelin Raceway Road Atlanta.  Since Saturday was the last race for Penske’s sports car program for now, this rivalry will come to a end.

Personally, I don’t think they’re actually related.  Montoya was…himself when asked about it afterwards.  Just described it as hard racing, as calm as could be.  He was no different than when I interviewed him in Long Beach at a media luncheon last year.  On the other hand, Derani was so angry over the whole situation that he requested a substantial amount of time to calm down when he was approached for an on-air interview.  If that interview ever happened at all, I don’t believe that it aired on the broadcast.

Post-race coverage was rather substantial.  Viewers heard from the class winners and champions from each class with the exception of the LMP2 class.  Why is that so?  Apparently, they couldn’t find Patrick Kelly, although they did look for him.  That’s rather strange since everyone in a championship position or class-winning position should be pretty close to the podium after the race.

A 12-hour race is a long watch under any circumstances.  Having the race on the same weekend as two other major sports car racers affected the driver lineups significantly.

Overall, the championship focus was high Saturday, but not suffocating.  It was substantial enough to pose some issues, though.  NBC Sports will need to be more cognizant of that going forward.  The individual classes had their battles covered rather substantially.  LMP2 got the least coverage, but that’s because they had the fewest cars and was generally the least competitive.  I do wonder what adding LMP3 is going to do to LMP2 next year.  IMSA is confident of four or five full-time LMP2 entries, plus additional part-time cars for next year, but I’m not sure.

That’s all for today.  This weekend sees Formula 1 travel to Bahrain for the first of two races at the Bahrain International Circuit.  The first race is the Grand Prix of Bahrain, which will be held on the Grand Prix Circuit.  TV Listings can be found in the TV tab above.

Tomorrow, we’ll finally break down the NBC Sports portion of the season.  How was the coverage overall?  Did NBC Sports’ strategy with the pandemic work better than FOX Sports’ setup?

Thanks a lot. You made me look at the calendar…. “Couch Potato TUESDAY”

Many thanks for the synopsis. I’m getting more into GT racing during the off season ;-)