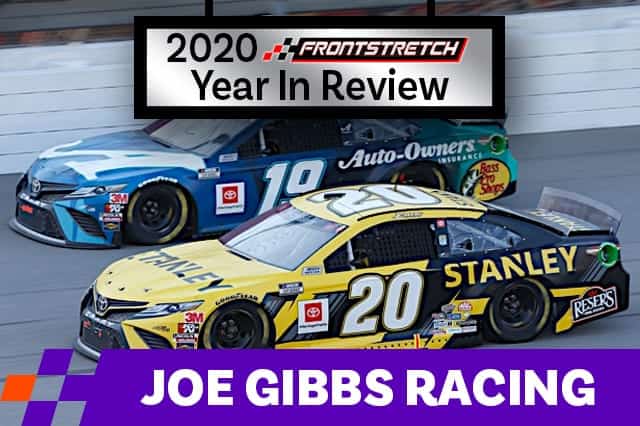 For a team that won more than half of the races in the 2019 NASCAR Cup Series season, Joe Gibbs Racing had every reason to be confident in its lineup for 2020.

Martin Truex Jr., Denny Hamlin and Kyle Busch all won at least five races in 2019 (seven, six and five, respectively) while Erik Jones contributed one victory of his own. Busch also ended up hoisting the Cup championship trophy when the final checkered flag of the season flew at Homestead-Miami Speedway; behind him, Truex and Hamlin both qualified for the championship round and finished second and fourth in the standings, respectively.

The team had won two titles in the past five years, both with Busch (2015 and 2019), and had Toyota ally Furniture Row Racing secure a championship in 2017 with Truex. The team dropped Daniel Suarez in favor of Truex for the 2019 season and the decision immediately paid off, as Truex won those seven races on a variety of track layouts. However, Truex’s longtime crew chief Cole Pearn elected to retire after the 2019 season, leaving a question mark as to how the veteran driver and pit box newcomer James Small would perform together.

Even coming off a championship season and the overwhelming success of 2019 for all four drivers, 2020 was not kind to the team, and the entire Toyota-based stable seemed slightly off, taking a few steps back. In 2019, the team recorded 21 races in which at least three of the four cars finished in the top 10; in 2020, through the first 12 races, that number sat at just four.

As a team, Gibbs scored 10 fewer wins in 2020 than it had in the past calendar year. That drastic falloff could be attributed to bad luck or the unpredictable year as a whole, but the team didn’t seem to have the same kind of speed all season that it had the year before.

Things did start off well for JGR in 2020, with Jones winning the season-opening, wreck-filled Busch Clash and Hamlin capping off Speedweeks by winning his second straight (and third overall) Daytona 500. That success was short-lived, though, and the team followed that up by managing just four top-10 finishes overall during the next three races.

The COVID-19 pandemic struck with all its chaotic force in mid-March, grinding everything to a halt for more than two months. Even with the extended time to analyze its struggles so far, JGR continued to flounder outside of the No. 11 team once the stoppage ended. Hamlin reeled off more wins and Truex won Martinsville’s night race, but his team and both Busch and Jones went on struggling as the season dragged on.

A total of 13 failures to finish marred the 2020 season for the four cars, with Busch alone suffering six DNFs. Only Hamlin recorded an average finish under 10th (9.3), and every single driver in the Gibbs stable had their stats drop, even marginally, from their 2019 marks. Even Hamlin, who scored more wins and laps led in 2020 than in his stellar 2019, had fewer top-five and top-10 finishes.

One bright spot was the 2020 playoffs, for which JGR had three of its four teams secure postseason spots. This mirrored its 2019 playoff lineup, but this time just two of the drivers locked themselves in via victories; Busch ended up qualifying on points.

Jones was the sole Gibbs driver to miss out on NASCAR’s postseason in 2020, continuing to trend downward after a 15th-place points finish in 2018 and 16th the following year. He ended up 17th in points for 2020 and managed a season-best finish of second at Talladega Superspeedway’s fall event but struggled to be out front all season, finishing with just 65 laps led.

In August, it was confirmed that Jones would not be returning to Gibbs in 2021 after three full seasons with the team, and the search for a ride began for him while Christopher Bell was confirmed as his replacement days later.

Busch scored a win at Texas Motor Speedway in October to keep his streak of seasons with at least one win alive, but it was after three miserable days of rain and fog and ended up being the final win for JGR in 2020.

The team’s general lack of speed showed itself once again in the finale at Phoenix Raceway, where Hamlin ran in the top four most of the race but generally ran last of the title contenders and failed to lead a lap.

Speed seemed to be the primary source of JGR’s struggles during the 2020 season, but that wasn’t the only kryptonite keeping the team from its 2019 success. Truex seemed to need some time to gel with Small, and the No. 19 team as a whole really seemed to be missing Pearn on top of the pit box.

Ben Beshore personifies the second straight offseason change for the team, as he will take Adam Stevens’ place as crew chief for Busch and the No. 18. The rough 2020 appeared to be the breaking point for JGR’s relationship with Stevens, despite the 2019 championship.

With Bell also entering the mix in Joe Gibbs Racing’s stable for 2021, the team is looking to the revamped No. 20 team to give them even more of a boost as Jones departs for Richard Petty Motorsports. Hamlin has only improved over the last several years, and both Busch and Truex will be aiming to return to their multi-win ways next season.

“The rough 2020 appeared to be the breaking point for JGR’s relationship with Stevens, despite the 2019 championship.”

It would be more accurate to say that the disappointment of the 2020 season was the breaking point in the relationship between Stevens and Kyle Busch, since Stevens was moved from the 18 team to the 20 team. Stevens did not lose his job with JGR; he was simply shuffled to another car and driver. It is also worth noting that Kyle only won 2 races since June, 2019, a span of 17 months. So it was really more than 2020 that caused the strain between Busch and Stevens. Kyle expects to be a contender in every race he enters.

Gee, why no mention of the cheating that it took to get Denny into the finals by a teammate. I call BS on the whole team and what they did to get Hamlin a spot. Its just out and out cheating and CRAPCAR allowed Gibbs to get away with it, even after all the radio traffic the went on and was heard. No more trust in CRAPCAR, its all about the money and Gibbs has the money and the rest walk. So sad.