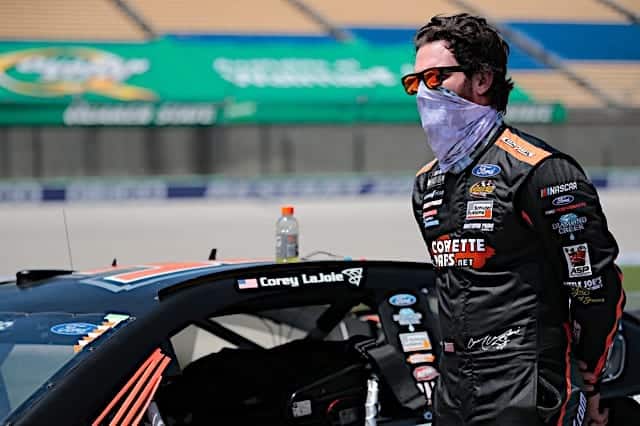 Corey LaJoie has a new home and big plans.

The 29-year-old has inked a multi-year deal with Spire Motorsports, beginning with the 2021 Daytona 500.

For months, LaJoie has been linked to Spire Motorsports, but he confirmed the move in a special offseason edition of his Sunday Money podcast, released Nov. 30 with guest Jeff Dickerson, co-owner of the race team.

LaJoie will be the team’s full-time driver of the No. 7 Chevrolet, fielding Chip Ganassi Racing chassis and Hendrick Motorsports engines. The multi-year deal, which is two years plus a third-year option has him intact through the 2022 season, the first year of the Next-Gen car.

“I do think that expectations are way lower than [what] we’re going to be achieving next year, which I think is good,” LaJoie told Frontstretch on Monday. “We’re going to sneak up on some teams that might not be putting a whole lot of work in over the offseason, thinking it might be a lame-duck year heading into the next-gen car. It’s kind of the opposite: Spire is going out and getting a new fleet of racecars for them, then turning around and getting a whole new fleet the following year for the next-gen car.

“I signed up not necessarily knowing what the plan was, but I wanted to be a part of the vision and the work that is ultimately going to make Spire a contending team.”

LaJoie said that it was Spire’s decision to purchase a second charter in August from Leavine Family Racing that opened his eyes. Ten days later, he announced he was parting ways with Go Fas Racing at the conclusion of the 2020 season.

“As soon as I heard that, I texted [Dickerson] and was like, ‘Hey, where do you want me to drop my seats off?’” LaJoie said with a laugh. “In one of our first meetings together, he was like, ‘I know you texted me that, but how much of it was joking, or [were you] serious?’ I said, ‘It was probably about 70-30 joking at that time, but now that we are getting a plan together and this is what we’re trying to do, it’s probably about 70-30 serious.’”

The two sides had two meetings, and by the end of the second a contract was being written up. LaJoie said there was no pressure for him to sign the contract, as Dickerson and T.J. Puchyr (Spire co-owner) were talking through other deals (which included other deals he had on the table on a whiteboard) as if he were one of Spire Sports + Entertainment’s clients.

“I looked at the board and was like, ‘You’ve got them all, those are all the teams I’ve had conversations with,’” LaJoie said. “I was like, ‘To be honest with you, if any of those call I’m probably favoring doing this deal over any of those because I think the journey and the challenge is going to be worth the fruit.’”

Statistically, LaJoie is coming off two similar seasons with GFR. In two seasons driving the No. 32, he placed 29th and 30th in the championship standings with three top-10 efforts. His average finishing position between the two years was separated by .3 positions.

And while LaJoie said he won’t know if it was the right decision until six months down the road, it felt like the best one on the table, though he said he turned down four offers, spanning from the Cup Series to the Xfinity Series.

“I wouldn’t have signed up if I didn’t think the competition side would be at least better than where I’ve been,” LaJoie said. “I think with the engine package, the guys we’re going to be hiring and the cars we’re going to be getting in-house and how much stronger of a deal it’s going to be than what I’ve been accustomed to, I don’t see why we can’t run with the three or four other options that I turned down to do this deal, because I think the long-term payoff is going to be better with this thing, and you also have a hand in building something.”

Schluter Systems, which has followed the driver from BK Racing to GFR and now Spire, has signed on to sponsor LaJoie in select races. He expects other sponsors that have worked with him in the past to do the same.

Spire is coming off a 34th-place finish in owner’s points in 2020, fourth from the bottom of chartered teams. In the team’s rookie year, 2019, it finished 36th.

Nonetheless, LaJoie said he believes wholeheartedly this is the right decision at this point of his career and wants to prove it on the racetrack.

What’s he setting out to prove? “That I can compete each and every week,” he said. “We had several good runs in the [No.] 32 car, but it wasn’t consistent enough to let everyone know that I can be a consistent runner. I’ve raced around Roush [Fenway Racing] cars, JTG [Daugherty Racing] cars and guys that had a significantly bigger budget than we had over there last two years.

“If we can have those top-20 to top-15 runs more consistently, twice per month compared to once every six weeks, that’s when you’re in the conversation for guys that are overachieving and guys that are doing a good job. Also just minimizing mistakes is key as far as points over the course of the year.

“We can surprise a lot of people, which I think we’re going to, but there are also going to be some new team bumps and woes. I think we have the right people over there to iron out any issues we have and go race.”

Great to read Spire is ramping up. Corey did very well with the 32 and will give Spire a solid driver. Corey has outperformed others on the grid who now have more monies rides when they were in lower series. I hope Corey signing with Spire means Landon Cassill can return to the 38 or drive the 77 with Spire. I also hope Gray Gaulding is in the mix for the 38 or 77. If those two can return to the grid in cars that should always be in the top 30, great. I think Landon could really help Spire build and would keep FRM where they’re at. Gray has improved so much. He overachieved with SS Green Light and would be strong with Spire or FRM.