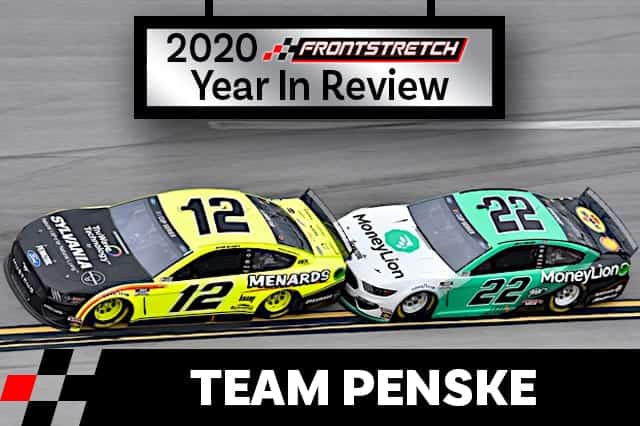 In the hierarchy of multicar NASCAR Cup Series organizations, the label of best overall team seems to rotate pretty regularly. Joe Gibbs Racing, Hendrick Motorsports and Stewart-Haas Racing have all laid a pretty solid claim to the top pedestal in recent years.

However, in terms of total team success, it is arguably Team Penske that wears the crown.

Since 2011, every Penske car that has run a full season has ended the year with at least one victory. Throw in six Championship 4 appearances and the resulting pair of Cup championships, and it’s a convincing case.

Some of that success is a credit to the team’s consistency in terms of personnel. It’s been eight years since a driver left the team. The three crew chiefs had certainly worn in their respective chairs atop the Penske pit boxes.

But after a 2019 that saw all three drivers make the playoffs but fall short of the Championship 4, owner Roger Penske decided it was time to shuffle the deck. The crew chief for each team was swapped with another. Jeremy Bullins went from Ryan Blaney‘s No. 12 team to the No. 2 of Brad Keselowski. Todd Gordon was moved from Joey Logano to Blaney and Keselowski’s longtime strategy master Paul Wolfe wound up calling the shots for Logano.

At first, it didn’t seem like a good move. Sure, Blaney had just one win in each of his seasons wheeling a Penske Ford, but the other two had held a championship trophy under the guidance of their respective crew chiefs. But once the season began, it became a little more clear that just maybe, Penske had made the right decision. Logano won two of the first four races in 2020, while Blaney led nearly 80 laps in the opening three events.

Keselowski took a bit longer to hit his stride, but once he did, the No. 2 actually had the best season of the three. After finishing in the top 10 just twice in the first five races, the 2012 series champ hit his stride once racing resumed. Victories at Charlotte Motor Speedway and Bristol Motor Speedway were sandwiched between handfuls of top-five finishes. Keselowski also landed a win at New Hampshire Motor Speedway and one at Richmond Raceway in the fall that gave him a pass through to the Round of 12.

He survived a lackluster performance in that round to make the final eight. Finishes of fourth, sixth and fourth made him not only a Championship 4 participant but also the hot hand heading to the finale. Unfortunately for him, Chase Elliott was one of the drivers he needed to beat, and he dominated en route to the win, leaving Keselowski second in both the race and the final standings.

Find you someone that looks at you the way @simonpagenaud looks at the Borg-Warner Trophy ?? pic.twitter.com/hF97YDI2ve

Logano went the opposite direction when racing returned after the hiatus amid the COVID-19 pandemic. The first event back at Darlington Raceway kicked off a string of 13 consecutive races during which Logano finished higher than sixth just once. The slide took the No. 22 from second to sixth in points.

Logano and Co. may have been down, but they weren’t out. The team finished in the top 10 at the end of nearly every race during the second half of the race season. Additionally, save for the two superspeedway events, the 2018 Cup champ was running at the finish and finished 14th or better.

Logano, like Keselowski, got hot at just the right time, picking up a playoff win at Kansas Speedway to secure his spot in the Round of 8. He followed that with a strong three-race run to ensure his opportunity to chase the title at Phoenix. But like Keselowski, Logano’s third-place finish left him just a little bit short of a second Cup championship.

Blaney was certainly the team highlight when the season began at Daytona International Speedway with his runner-up finish. However, the problems took hold soon after. It wasn’t as if the No. 12 was off the pace — quite the contrary; Blaney was often one of the fastest week in and week out. He just couldn’t capitalize when it came down to crunch time. Blaney would lead laps and run up front only to be victimized by some unfortunate circumstance that would rob him of stage points or a good finish. Contact with another car, a slow pit stop, flat tire, etc., would strike race after race.

A second straight Talladega victory all but locked up his playoff spot, but the inability to get maximum playoff points caught up with Blaney in big way when the postseason began. He was seventh in the season-long standings when the final race concluded, but when the rundown was reset prior to the first playoff race, he plummeted to 15th. Then, a disastrous opening round in which he finished no better than 13th got him eliminated.

The tragedy of his elimination was that had he been able to stay in through the first round, his finishes in the subsequent rounds would have kept him in all the way to the championship finale. Still, all was not lost for the No. 12 team. Blaney led 668 laps in 2020, his career high. He also matched his 11 top-five finishes from last year.

With no major personnel changes in the works for 2021 and a year under their belts in their current roles, all three Penske teams are poised to be contenders next season. The cars are fast, the drivers capable, the crews prepared. Anything less than three cars chasing the crown in the finale and one holding the championship trophy at race’s end will likely be somewhat disappointing. All of the ships in this fleet are certainly battle tested and gunning for the title.

After all, what else would you expect from a team run by Roger Penske?

The Team Penske Dodgeball Challenge comes to a close with a game that definitely does not disappoint. ? pic.twitter.com/RxhFczozRd