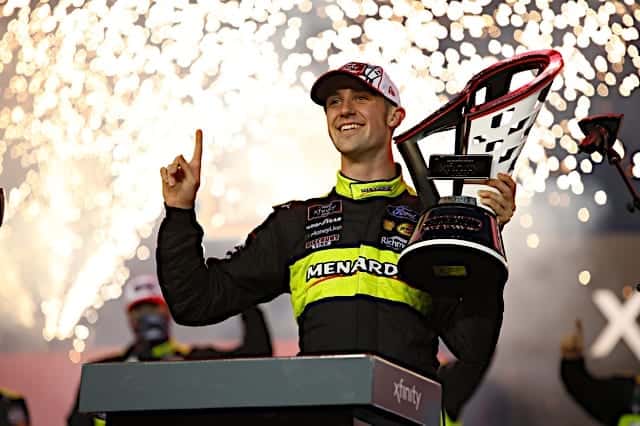 In this week’s edition of the Frontstretch Podcast, Dustin Albino and Mike Neff discuss the first three weeks of a busy 2020 offseason.

The crew chief change at Joe Gibbs Racing highlights the offseason, as Adam Sevens will move from winning 28 races and two championships with Kyle Busch to Christopher Bell. Was the change needed after just one subpar season for the No. 18 team?

In the Xfinity Series, Daniel Hemric was named to the No. 18 JGR car, replacing Riley Herbst, as he’s linked to Stewart-Haas Racing. Harrison Burton will return for a second full-time season, while his cousin Jeb Burton got to the nod to run full time with Kaulig Racing. AJ Allmendinger rounds out Kaulig’s full-time efforts, coming off a two-win 2020 season. Brett Moffitt will also compete for Our Motorsports full time.

It took until mid-November, but the Truck Series released its 2021 schedule. We give our thoughts on three road courses and two dirt races being included in the schedule. Raphael Lessard and Ryan Truex also announced their plans for next season.

Finally, Austin Cindric joins the show to reflect on winning the 2020 Xfinity championship at Phoenix Raceway, making a bold three-wide pass for the lead on the white flag. He also discusses selling the idea to his parents of one day becoming a racecar driver as a kid.