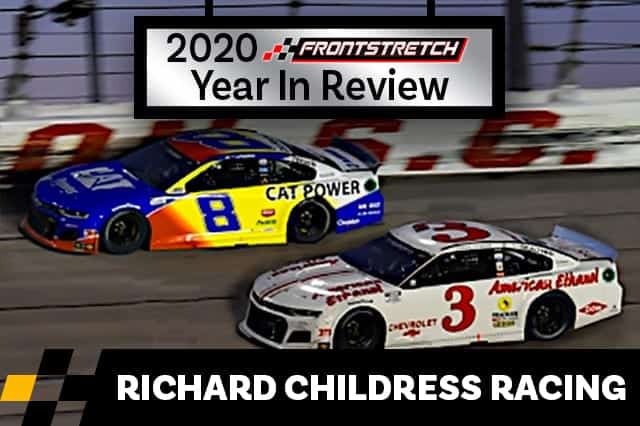 Richard Childress Racing had a renewed sense of purpose for the 2020 NASCAR Cup Series season. After enduring a down year, the organization looked to gain more success with the 2015 Daytona 500 champion and the 2018-19 Xfinity Series champion.

One of the moves the team made to turn things around was with its crew chiefs. Justin Alexander returned to lead the No. 3 team of Austin Dillon in place of Danny Stockman, while Randall Burnett slid over from NXS to join Tyler Reddick. It made sense, as Alexander had led Dillon to his Daytona 500 and Coca-Cola 600 victories.

But what shined throughout the year was RCR’s persevering attitude, originating from the team’s luncheon prior to the season. Marine 1st Lt. Patrick “Clebe” McClary, who was awarded the Medal of Honor, motivated the group to never give up. He shared the acronym FIDO: Forget It and Drive On; this was just what RCR needed in a year like no other.

The team faced many challenges, including pit road penalties, crashes and mechanical issues. One of the team’s early struggles came at Phoenix Raceway, where both drivers suffered tire troubles which put them in the wall and out of the race. Dillon and Reddick ran in the top 10 at one point, but wound up finishing in the 30s after their incidents.

However, possibly the biggest challenge of the year was the coronavirus. On-track activities shut down for two months before NASCAR implemented necessary precautions to resume competition. Yet the never-give-up mantra was still alive for RCR, as both Reddick and Dillon came out of the gate swinging. They each earned two top 10s in the first five races back before encountering troubles at short tracks. Dillon in particular showed his perseverance at Martinsville Speedway, where an early tire issue knocked the crush panel out, causing high temperatures and carbon monoxide fumes. He tried to stay out as long as he could but ultimately retired with just under 100 laps to go. His crew helped to get him out and he was treated and released from the infield care center.

Long, hot night @MartinsvilleSwy but we had a fast #3 AstraZeneca Chevy #partner pic.twitter.com/8TaFLCGea2

RCR also struggled at a much larger, triangular racetrack. In fact, Reddick probably wants to forget about his experience at Pocono Raceway, as he ended a few laps down 30th and 35th. A run-in with Erik Jones ruined his Saturday, while mechanical issues set him back early on Sunday. FIDO definitely resonated with the rookie and his teammate after these rough runs.

Though the team encountered several gremlins throughout the year, it pushed through and showed strength at somewhat surprising times. One such moment was at Texas Motor Speedway in July where Dillon and Reddick claimed the first two spots, thanks to some key recommendations from the RCR command center.

“But the call was the win, the call that Justin made,” Dillon said on a Zoom call with reporters. “I asked him for something. Our car was fading. I thought Tyler, his car was a little better coming down the stretch. He had kind of caught me, but we had track position on him. I said, ‘Man, I got to have something to finish this race off.’ He said, ‘All right, we’re taking lefts.’ Lefts had freed my car up all day. I was tight. When we put the lefts on, it was the call we needed to go on and win the race.

“It came down to just some restarts, not screwing up, making it happen when it counted on those restarts, getting through the gears, timing them. I had some good pushing. My buddy Kurt Busch gave me a good push that first one. Joey Logano was also a lot of help down the stretch.”

The command center uses AI technology and data on the track to help RCR’s race strategy, and it certainly worked out this time. While technological advancements are certainly beneficial, they aren’t the only necessary component. The driver and crew also need to perform well and avoid problems on the track and on pit lane. Additionally, the crew chief plays an important role at the track and sometimes needs to rely on his own intuition.

“The relationship between the crew chief and the driver is critical because we might say 100% we definitely think you need to take right-side tires here,” Dr. Eric Warren, RCR’s chief technology officer, told NBC Sports. “The crew chief is going to know, even a little bit more than us, how far is the driver on the edge and maybe we’re not seeing a little damage on the car. My way of thinking about it has always been like we used to not have computers to do word processing, right? Well, now you have that and you can, so now you can spend time doing the next advanced thing. That’s the same with us.

“I don’t think the human element ever really is going to be replaced, at least not short term. I think it allows you to think about things more complex.”

Though the command center highlighted the organization’s strength at 1.5-mile courses, the team faced another challenge. Before NASCAR’s first trek on Daytona International Speedway road course, Dillon tested positive for COVID-19 and had to sit out the event. The team added Kaz Grala to pilot the No. 3 Chevrolet; in his debut, Grala led three laps and earned a seventh-place result. FIDO was alive and well for this weekend.

“Well, we knew we had to start at the back due to the driver change, so I really took stage one to get comfortable in the car,” Grala told reporters on Zoom after the race. “I didn’t push the issue. I was conservative in the braking zones, wasn’t real aggressive on the restarts, just kind of hung around, made sure my Cup debut didn’t end prematurely and got comfortable out there, and by stage two I was working up to it, making a little bit of headway forward, and by stage three after the lightning delay I kind of got a refresh. I got to look at some SMT data which was really helpful because of course with the late notice I wasn’t able to run any laps in the simulator this week in the Cup car, so I didn’t really know exactly what to expect. I got to overlay my laps with Chase (Elliott)’s and Denny (Hamlin)‘s and find a couple things that I could gain, and when we strapped back into the car we moved forward from there.

“Justin Alexander called a great race. We took tires right after that lightning delay, which I do think was the way to go, and that helped our track position and ultimately put us where we needed to be to capitalize on a great finish at the end.”

Reddick and Dillon also ran well at some shorter tracks and Darlington Raceway. Notably, Dillon kicked off his playoff run with a runner up in the Cook Out Southern 500, finishing just behind Kevin Harvick. In fact, his entire first round went fairly well, with a strong fourth place at Richmond Raceway and 12th at Bristol Motor Speedway. It didn’t go without issues, though; the No. 3 car had a run in with James Davison as Dillon tried to go around Harvick, who was pitting. Still, Dillon fought back to 12th and earned enough points to move on to the Round of 12. Reddick also had a good day, taking home fourth at the Last Great Coliseum.

Unfortunately, the remaining events left much to be desired, save for Reddick’s seventh-place run at Talladega Superspeedway. Although the pair failed to earn another top 10 in the final three rounds (except for Talladega), Dillon came close at Kansas Speedway and Texas. Still, an 11th-place rank in the standings after a strong first round was not what the team wanted. They have something to build on for next year, though.

“I think we learned a lot this year as an organization, and already have solid momentum heading into 2021,” Dillon said in a team release. “As a team, we learned that every point matters and did a good job this year of starting up front and keeping track position. It was great to get a 1-2 finish for RCR at Texas Motor Speedway in June, and I know that we will continue to be competitive and strive for wins in 2021.

“For me personally, it was a great year on and off the track. We made the NASCAR playoffs and my son Ace was born. We have some of the best partners in NASCAR and will continue to work hard for them.”

Yes, RCR’s persevering spirit carried the team through the year, and it’s likely that both Reddick and Dillon will bring that back in 2021.