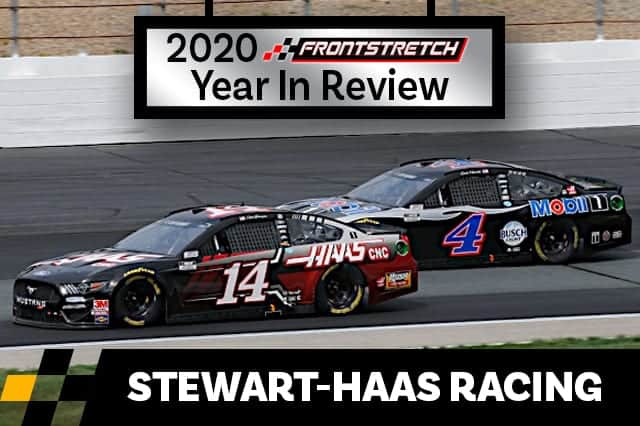 The 2020 season saw Stewart-Haas Racing being pulled in multiple directions in the NASCAR Cup Series. Kevin Harvick was trying to capitalize on his prime to score his second championship.  Cole Custer was coming into his rookie season in Cup and wanted to do the best he could.  Clint Bowyer and Aric Almirola were both in contract years and needed to get a real idea of where they were going.

With those stories in play, it could have led to quite the fractured team dynamic.  This was not really the case, but there were still likely some unhappy faces at SHR once November came.

Harvick seems well aware of the fact that he probably doesn’t have that many more chances to win championships in the Cup Series.  He’s currently under contract through the end of 2023.  If he had won the championship this year, he would have been the oldest driver ever to win it, at 44.  Winning a title at age 45, 46 or 47 is not necessarily out of the question, but not likely.  Realistically, 2020 was Harvick’s best chance to win another championship, and the team laid an egg at Martinsville Speedway that cost him his chance.

“Look, these championships aren’t like winning like [Richard] Petty and [Dale] Earnhardt used to win them,” Harvick said after Martinsville.  “You have to put them together three weeks at a time and it comes down to one race and it came down to one race for us tonight and came up short.”

For much of the season, the entire No. 4 team encapsulated that sense of urgency.  Even with the complete lack of practice after the shutdown, the No. 4 team was wired and ready to go.  Harvick winning the first race back at Darlington Raceway after the COVID-19 pandemic postponed the season really set the tone.  From then on, he and his team firmly placed themselves in a solid groove.

Statistically, Harvick’s 2020 season is one of the greatest of NASCAR’s modern era.  He had an average finish equal to what Jeff Gordon accomplished during his 13-win season in 1997.  Only four or five performances in the last 40 years are equal or better, such as Dale Earnhardt in 1987 and Dale Jarrett in 1999.  The best example where the driver in question failed to win the title was Rusty Wallace in 1988.

Also, this was not the first time that a driver has won nine or more races in recent years and failed to win the championship.  Wallace won 10 races in 1993 and had to gain a bunch of ground on Earnhardt to even take the championship to Atlanta Motor Speedway. Gordon’s first 10-win season (1996) saw him come up empty, partially because he failed to finish the first two races of the year.  Carl Edwards had nine wins in 2008 and came up short as well.

Unfortunately for Harvick, it’s hard to maintain anything approaching the level of success that he and the No. 4 team enjoyed in 2020.  The chances of a letdown going forward are high, even if he were much younger.  That doesn’t necessarily mean that 2020 was his last chance at a title, but it’s not going to be easy going forward.

Bowyer had a target on his back from the very beginning of the season.  He was in a contract year and knew that Chase Briscoe was waiting in the wings.  He needed to truly impress in order to keep his ride.

At the same time, he turned 40 in 2020 and now has a wife and two kids.  Bowyer’s son Cash is already racing.  There were a lot of forces pulling on him outside of the car.

Bowyer finished ninth in points in 2019 and felt that he needed to improve on that to solidify his spot in the team.  Unfortunately, those results didn’t come.  Yes, Bowyer made the playoffs and ran great in the Round of 16 to advance, but his performance was just not as good.

Aside from “getting Bubba’d” on multiple occasions, Bowyer seems to truly enjoy himself doing television in 2020 as well.  It provides him with a new way to stay involved in the sport without driving.  As a result, he has chosen to take the plunge full time.

Bowyer will still be quite busy in the first half of the year, but he’ll be able to spend more time with his kids.  FOX Sports seems to love Bowyer’s kids as well.  Don’t be shocked if they show up on broadcasts at some point in 2021, like they did here.

"Do you think you and @JeffGordonWeb are gonna wreck each other in the booth??"

Almirola regressed a fair amount in 2019 after his career year in 2018.  The hope for 2020 was that he would improve his pace, earn better finishes and advance further in the playoffs.

Compared to last year, 2020 was actually much better, but he didn’t end up with much to show for it.  Almirola ended 2020 with career highs in top-five finishes (six) and top 10s (18).  He was definitely in position to win races.  He had a stretch of five top fives in a row in June and July.  Yes, one of those was the backward third-place finish at Talladega Superspeedway.

However, Almirola finished 15th in points, one position worse than he did in 2019. The first three-quarters of the season were great, but he had a terrible Round of 12 that unraveled his year.  Things didn’t really get much better after he got eliminated from the playoffs.

In 352 career Cup starts, Almirola has never won outside of Daytona International Speedway and Talladega.  The primary goal in 2020 was to get closer to that accomplishment.  He and the No. 10 team did get closer but couldn’t put the whole season together.

Of SHR’s four drivers, it’s likely that only Custer was truly satisfied with his 2020 season.  He accomplished what he set out to do: win the Rookie of the Year Award.   Everyone else came up short of their true goals.

Having said that, Custer’s rookie year in Cup was streaky.  His victory at Kentucky Speedway came in a stretch where he earned four top-10 finishes in five races, including his only career top fives (the victory and the fifth-place finish at Indianapolis Motor Speedway the weekend before).  Outside of there, Custer struggled a bunch.  Despite winning Rookie of the Year, he was really only the third-best rookie on the grid in 2020 behind Tyler Reddick and Christopher Bell.

Despite the streakiness, when he was on, he could compete with the best of them.  Custer didn’t exactly luck into his victory.  He and the No. 41 team earned it with hard work and good skill on the track.

Unfortunately, Custer’s struggles, especially early in the year, meant that the team actually performed worse in 2020 than they did with Daniel Suarez.  That was not the expectation going into the season.  Remember that Suarez finished 17th in points in 2019 and was viewed as having underperformed in the seat; that’s why he got dumped in favor of Custer.

Despite his struggles, Custer does have some confidence going into 2021.  Good thing he does, since the expectation will be for him to improve.  If he can elevate a number of his finishes in the 20s to the top 15 along with additional stage points (he only scored 20 all season, including six in his Duel race at Daytona), that will help his case.

In 2021, there is the potential for a swoon from Harvick, simply because it’s nearly impossible to maintain such an historic clip.  However, since this will be a lame-duck year before the NextGen car enters the fold, development will be limited.

Briscoe (replacing Bowyer) will be where Custer was this year, learning the Cup trade.  He’ll have teammates to lean on, but it’s ultimately going to be up to him.  Almirola earned a contract extension but needs to continue to try to recapture his previous form, while Custer will try to build on his rookie year.