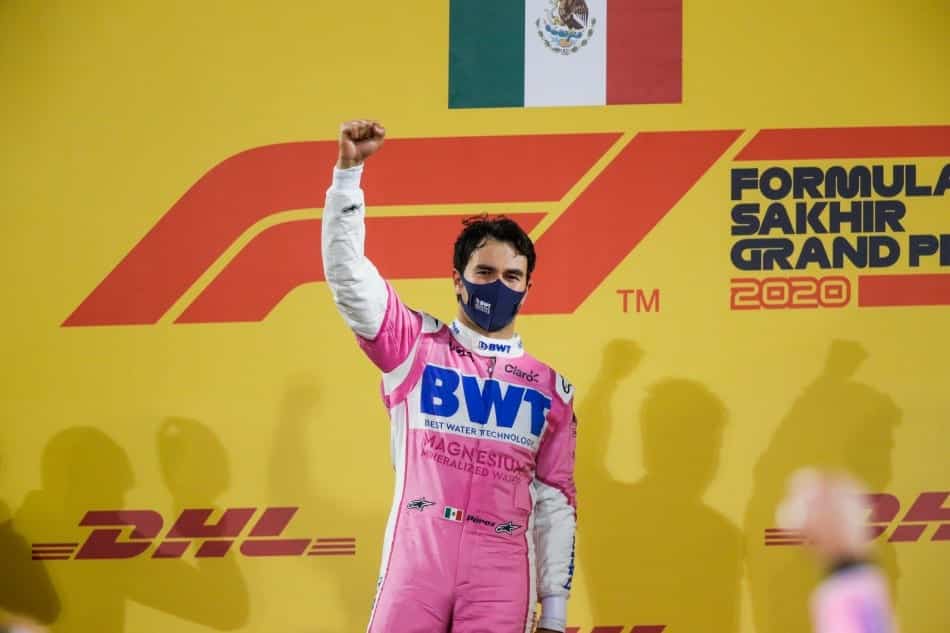 Sergio Perez has both endured and enjoyed a journeyman’s career.  On Sunday, he earned his signature first win, a moment that seemed long overdue for the 30-year-old Mexican driver.

Perez has hovered near the front of the pack all season long, but circumstances finally proved favorable, and he capitalized on having a car good enough to drive home to the Sakhir Grand Prix win in Bahrain.

Having a competitive car has shown to be of the utmost importance, something that came to light even more so this weekend than it might ever have — case in point: George Russell.

Russell has been languishing at the rear of the pack all season long while driving for Williams.  Given the opportunity to drive the top-flight Mercedes for the Sakhir GP, Russell qualified in second and looked not only poised to grab the first points of his career but his first win.  While Russell was felled by a puncture late in the race, his weekend illustrates just how important having a good car is in securing solid results.

For Perez, the 2020 Racing Point has proven to be a stellar car on the right tracks, capable of competing with Red Bull for second-best on the grid.  And because of this car, Perez has been able to show flashes of his ability.  His journey to get to what has been considered a Mercedes junior car is a long one.

He moved to Formula 1 in 2011 with Sauber and an underwhelming car that brought little in the way of expectations.

He lasted two seasons with the team, finishing 16th in his first year and 10th in his second before moving to what should have been a first-rate ride.

He joined McLaren for the 2013 season, but the team had begun its slide into mediocrity, and even though he earned 11 top 10 finishes, he wound up 11th for the year.  With McLaren turning to Kevin Magnussen, he found a new home at Force India.

Since 2014, Perez has been aligned with the team, even if ownership and the name have changed during his tenure.  His results in a Pink Panther car have always been solid.  He continually racked up top 10 finishes, getting what he can out of the car.  He has never finished outside of the top 10 in the driver’s standings since signing, but he has never finished higher than seventh.

This year, with the Sakhir win, he may just finish fourth.

Perez has finished on the podium 10 times in his career, with two coming during the 2020 season.  If anything, he has finally found a car that matches some of his talents.  Yet for all of his efforts and loyalty to Force India/Racing Point, he will be jettisoned at the end of the year in favor of Sebastian Vettel.

Even still, Racing Point celebrated Perez’s win with aplomb by tweeting, are you not entertained?

ARE YOU NOT ENTERTAINED pic.twitter.com/WBKBAhhwGy

With the win, Perez became the first Mexican race winner since Pedro Rodriguez in 1970.

“I’m a bit speechless,” he said before a tear-filled trip to the podium. “I hope I’m not dreaming, you know, because I dreamed so many years of being in this moment. Ten years, ten years it took me. Incredible. I mean, I don’t know what to say, you know.”

The race was not a gift to Perez.  Though he had moved to the front thanks to Racing Point pitting him at an opportune time and Mercedes employing a colossal screw-up regarding how they pitted their cars, Perez still had to earn the win.

Russell restarted the race behind Perez at lap 61 and closed in on Perez as the laps wound down and looked like he might be able to challenge the Mexican driver.  Perez, however, looked to have the measure of the young Brit, keeping him at bay and looking like he might secure his elusive first victory.

When Russell needed to pit because of a punctured rear tyre, Perez enjoyed a clear path to victory.

Perez felt that his car was good enough to take the win, calling it a limousine because of how smoothly it drove around the track and that he would better Russell.

“I think today we won on merit. Yes, the Mercs [sic] had some issues, but in the end my pace was strong enough to hold George [Russell] who did a fantastic race today.”