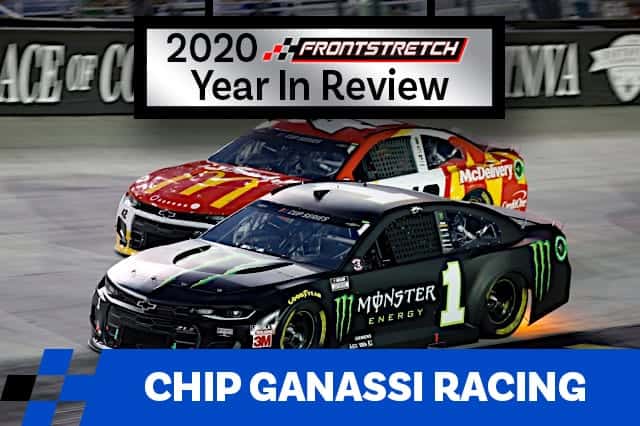 The 2020 season was tough on everyone involved in NASCAR. It got off to a fine start but was stopped just four races in, and the remaining 32 races were run with COVID-19 guidelines in place. It was not what any team expected or was prepared for.

The team that may have been affected the most by the pandemic, however, was Chip Ganassi Racing.

When NASCAR stopped racing in the middle of March due to the COVID-19 pandemic, the organization had one of the hottest young drivers in the sport. By the time racing resumed in mid-May, that driver wasn’t even in the sport anymore and the outlook of its team and future changed completely.

It was late April 12 when Kyle Larson was running a virtual race that was streamed over Twitch. During the race, Larson used a racial slur while talking with some friends. The next morning the news broke, and later that day Larson released a video apology, but it was too late. By that time, his sponsors, Chevrolet and CGR all cut ties with the 27-year-old driver, and Larson was suspended indefinitely from NASCAR.

The situation put CGR in a major dilemma. It already had sponsors committed to the team, and those sponsors expected to compete for a Cup Series title. The team needed a driver and quickly. Its options were limited as the season had already begun, eventually settled on former Cup champion Matt Kenseth.

Larson’s actions were unacceptable and the consequences he received were warranted. It was a bad situation, but one Larson learned from. After extensive sensitivity training and a fresh outlook on life, Larson says he has learned from his mistake. In October, it was announced that he would be reinstated into the sport on Jan. 1, 2021. A couple of weeks later, it was announced that Larson will drive  Hendrick Motorsports’ No. 5 in 2021.

The sport of NASCAR as a whole, too, learned from the Larson situation, and it showed during one of the most memorable moments for NASCAR in the 2020 season. That’s when the sport came together and showed unity during a difficult time for Bubba Wallace at Talladega Superspeedway.

After Talladega, both CGR cars continued business as usual, but it was the No. 1 team and driver Kurt Busch that were getting most of the attention. His season came down to two major accomplishments. One came on July 6, when he made his 700th career Cup start at Indianapolis Motor Speedway. It was a huge milestone for Busch, who has had some challenges on and off the track during his career. He is currently 14th on the all-time NASCAR Cup Series starts list with 720.

The other accomplishment for Busch was a bit more memorable. Coming into the September race at Las Vegas Motor Speedway, Busch and his team accomplished their goal of making the playoffs and advancing to the Round of 12, yet the team hadn’t recorded a top-five finish since July. That was about to change. He began the event in ninth and with 100 laps to remaining was running 19th.

However, a timely caution flag flew during a round of green-flag pit stops and Busch found himself in the lead with most of the field a lap down. This put him in front on a restart with just 25 laps to go. Clean air was the No. 1 car’s best friend ,and Busch was able to hold off Matt DiBenedetto for the victory and advance to the round of eight. It was a huge moment for Busch, who was able to win at his hometown track for the first time in his career.

However, on the No. 42 side, things didn’t go as well. Kenseth was thrown into a tough spot for the 2020 season. He hadn’t run a race since the 2018 season and was now expected to run for a championship without practice or qualifying on a team he never worked with before. It was not an ideal situation, and it showed.

Despite the results, there was one shining moment for the No. 42 team in 2020. It came at Indianapolis, when Kenseth finished runner-up. The No. 42 team even led 12 laps in the event and put pressure on eventual winner Kevin Harvick late in the race. The finish gave the team hope that maybe things were coming together after a rough start to Kenseth’s season.

Unfortunately, that did not happen. The team continued to struggle and that led to a change of leadership on the team. Crew chief Chad Johnston, who had been with the organization since the 2016 season, was replaced after the race at New Hampshire Motor Speedway. Team engineer Phil Surgen took over, but the results didn’t improve. By the time the end of the regular season came, Kenseth was outside the playoffs.

Shortly after the playoffs began questions arose about the future of the No. 42 Chevrolet. Kenseth, a 48-year-old driver with over 675 starts in the Cup Series, came back on a one-year agreement. The struggles and his age made many question whether Kenseth would return to the team in 2021.

In mid-September, that question was answered. The team announced a driver to take over the No. 42 car for 2021 and beyond: Ross Chastain to fill that seat. Chastain moves up from the Xfinity Series, where has two wins, including one for CGR in September 2018. He ran the 2020 season at Kaulig Racing in the Xfinity Series, finishing seventh in the standings.

"It still hasn't sunk in yet" ☎️ @RossChastain reflects on the moment that @GanassiChip asked him to drive the No. 42 car next season. pic.twitter.com/8MZHluwUWI

2020 was an unforgettable season for the organization in more ways than one. Busch got the organization to the victory lane for the 14th time since Chip Ganassi took over the team prior to the 2001 season. Busch finished the season 10th in the standings, while Kenseth finished 28th, though he missed the first four races of the season. A new chapter will begin in 2021, with Chastain aboard its No. 42 and Busch returning for a third season in the No. 1.