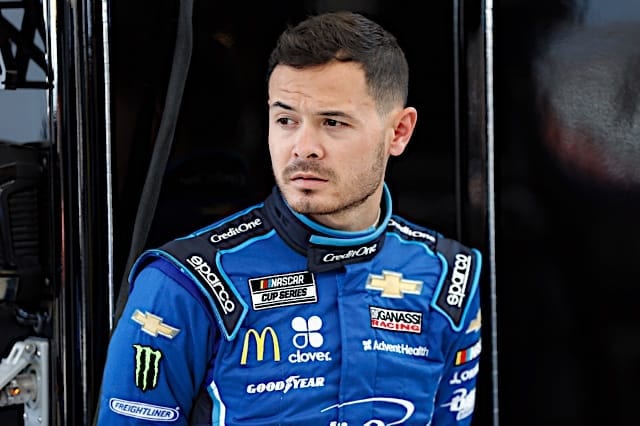 The 2020 NASCAR season unquestionably brought us some of the wildest headlines in this current era of racing, from Ryan Newman’s horrific Daytona 500 crash and recovery to the COVID-19 pandemic stopping on-track action for two months.

It was during this hiatus that another shocking headline emerged out of the blue: the controversial suspension of now-former Chip Ganassi Racing driver Kyle Larson.

Through the first four races of the season, Larson scored three top-10 finishes and was sitting seventh in the standings after finishing fourth at Phoenix Raceway in March.

The pandemic soon brought racing action to a grinding halt the following week. But there were virtual racing platforms such as iRacing for NASCAR competitors to fill the void. During these races, drivers came together online and interacted with one another via headsets while they raced on their computers at home. A handful of these races were even broadcasted on FOX Sports 1, exposing fans to a new form of fun and competitive racing that they don’t often get to see.

On April 12, Larson made a grave mistake during one of these online racing events, saying a racial slur while on a hot microphone. This set off the avalanche that ultimately spelled his doom.

Once word broke out of the incident, NASCAR slapped an indefinite suspension on Larson. Many sponsors withdrew their support for Larson. He was suspended from iRacing and all of its platforms. Even after issuing a video apology via Twitter, there was nothing that he could do except watch his career crumble to pieces around him.

As all of this unfolded, CGR was left with no other option but to fully release him from his driving duties. The team picked up 2003 Cup champion Matt Kenseth to drive the No. 42 car for the remaining 32 races of the season.

From that point on, Larson knew he had a lot of homework to do. The first person he reached out to after the incident was Bubba Wallace. The two drivers had a productive discussion about Larson’s mistake, his apology and what he could do to repair his attitude and his character.

Wallace ultimately stood with Larson, saying in a statement, “We discussed why he chose to use that language and I shared my thoughts. I told him, it was too easy for him to use the word and that he has to do better and get it out of his vocabulary. I am not mad at him, and I believe that he, along with most people deserve second chances, and deserve space to improve. I do wish him and his family nothing but the best. And I am more than willing to work with him to address diversity and inclusion in our sport.”

After completing more diversity training, Larson engaged in meetings with members of Philadelphia’s Urban Youth Racing School, a facility designed to give kids in lower-income urban households STEM-related education and financial opportunities to pursue a career in motorsports.

Larson also donated his time at various food banks in cities such as Minneapolis, Minn., and Charlotte, N.C., helping deliver groceries and meals to needy families.

While Larson was doing what it took to improve his image, the itch to get back on the track never faded away. After serving a 30-day suspension from the World of Outlaws sprint car series, Larson was given the green light to return to competition. With sprint car racing being in his wheelhouse, he was able to maximize his time in these cars to great extent, racking up dozens of wins over the span of the summer.

Larson was approved by NASCAR on Oct. 19 to return to competition beginning on Jan. 1, 2021. This meant the floodgates would be opened on the chance for a Cup team to get a good steal on Larson as a driver.

On Oct. 28, that reveal came: Hendrick Motorsports announced that Larson will drive the team’s No. 5 car in a multi-year deal.

With the 28-year-old Larson joining teammates Chase Elliott, 25, William Byron, 23, and Alex Bowman, 27, this will give Hendrick its second-youngest driver lineup since expanding to a four-car team, with the combined average age being 25.75 years old. The team’s youngest driver lineup came in 2005, with Kyle Busch, 19, Jeff Gordon 33, Brian Vickers, 21, and Jimmie Johnson, 29, averaging out to 25.5 years old.

Even though he has no sponsorship to bring forth yet, team owner Rick Hendrick said he remains faithful that sponsors will notice the positive changes made by Larson, and sign on with him.

“I know it’s not going to be easy,” Hendrick said. “We’re just going to take it one step at a time because I think as people really understand and get to see him through the lens of what he accomplished this year while he was out of the car, I think people are going to be more comfortable in coming on board. So that’s my hope. And we’ll see how it works out.”

Larson’s driving talent speaks loud enough volumes on its own. He’s a proven winner in every racing vehicle that he’s driven in NASCAR, ARCA Menards Series, WOO and more. With a talent like Larson, it would be foolish for an owner like Hendrick to pass up an opportunity like this.

Whatever outcome was desired by those on either side of the debate, this is just how the cookie crumbled. Honest mistakes happen. Anyone can make them. He’s long since paid his dues. He deserves nothing more than just to have a smooth and easy transition back into his job as a racecar driver.

“Being labeled a racist has hurt the most, but I brought that on myself,” Larson said on his website. “What I didn’t expect, though, were all the people who, despite their disappointment in what I did, made the choice to not give up on me. It motivates me to repay their faith by working harder, not giving up on myself, and making sure something positive comes from the harm I caused. I can’t go back and change it, but I can control what happens from here on out.”

I found new respect for Rick Hendrick. I know it’s a win-win situation for Larson and HMS, but Rick didn’t have to give Larson a chance. I’m glad he did, though… everyone deserves a second chance and to show that they have learned from their mistakes.