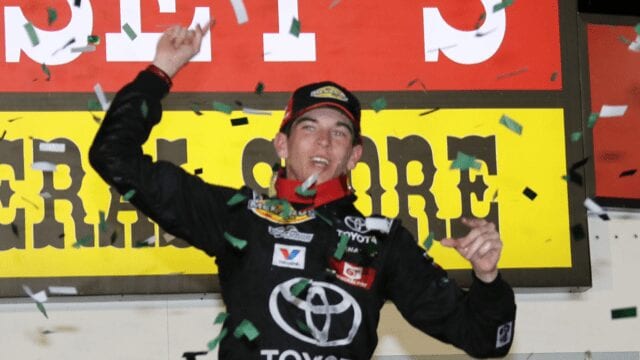 Smith will pilot the No. 18 previously driven by Christian Eckes.

Safelite Autoglass will sponsor the full-season effort, Smith’s first in the series, for 15 races.

“Since I started racing at a young age, I’ve worked hard towards my goal of getting to compete full time in NASCAR, so being named to drive the Safelite AutoGlass Toyota Tundra and being able to chase a championship in the Camping World Truck Series next year is very rewarding,” Smith said in a team release. “I’ve learned a lot from Kyle the last few years, and I’m thankful to be in a position where I can continue to learn from him.

“KBM is a top-notch organization, and I know that with the hard work from everyone in the shop combined with the support from Toyota and TRD that every time we go to the race track we’ll have a chance to compete for wins as long as I do my part.”

“Chandler is following the path that other Toyota Development drivers have in past seasons where they gain valuable experience driving a limited schedule for a couple of seasons and then graduate to running full time for a championship once they are eligible to do so,” team owner Kyle Busch said. “He showed that he could run up front on the short tracks right out of the gate in his first season and at the end of this year once he started to understand the aerodynamics of racing on the bigger tracks in the Truck Series, he proved capable of producing top fives no matter where we were racing. Next season, we expect him to continue his progression and be able to turn some of those second and third-place finishes into wins and put himself into the mix for the championship.”

Smith joins John Hunter Nemechek, who was previously announced as the driver of the team’s No. 4 in 2021.

Eckes’ plans for 2021 have not yet been announced.

KBM looks much stronger this season.