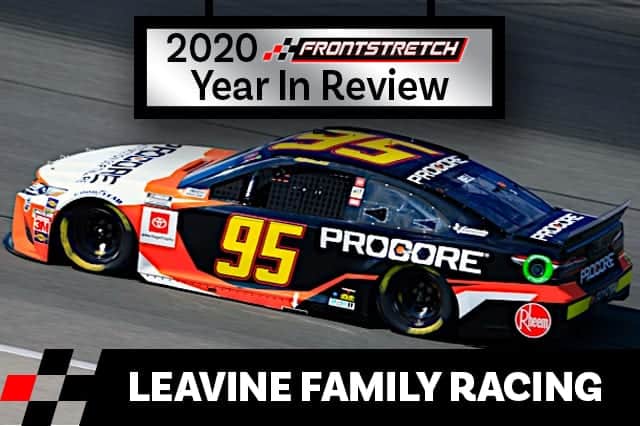 Instead of being another year to build Leavine Family Racing into a top NASCAR Cup Series team, 2020 turned out to be the last for the small team that began operating back in 2011. It was announced in the summer of 2020 that the team would be closing up shop at the end of 2020.

Even with this announcement, rookie driver Christopher Bell ended up having a very solid first year in the Cup Series for the team. The team and Bell both went through growing pains prior to the COVID-19 pandemic to start the season, but it seemed like once both parties learned what each other wanted, they were contenders quite often.

After a decent 2019 season with driver Matt DiBenedetto, LFR took the next step toward being a contending Cup team. Hiring Bell was the first step in that process, which also meant more Joe Gibbs Racing support for 2020.. A driver with 16 wins in the Xfinity Series in only two full-time seasons seemed promising even for a smaller team, and many expected results right away.

But Bell and LFR both struggled mightily to start the year, as their best finish in the first five races was 24th. However, once the season came to a halt though due to COVID-19, the team figured something out and scored top-12 finishes in three out of the next four races, including two ninth-place results.

This set the tone for the rest of the season and led Bell to an admirable 20th-place finish in points with two top fives and seven top 10s to his name. While both Bell and LFR likely wanted more, this was a step in the right direction toward success. With no practice and no qualifying for much of the season, it is fair to say they had a successful season, mostly in the second half. The first half was more of a struggle, but Bell turned into a contender for top 10s quickly during the summer months, and it almost led to a win.

The best moment for the team came at Texas Motor Speedway in October, the home state for LFR. Bell arguably had the best car near the end of that race and nearly captured his first career win in LFR’s third-to-last race. He ultimately finished third, the best finish for the team in 2020 and its best result since DiBenedetto’s second-place run at Bristol Motor Speedway the previous season.

In 2020, the team proved it could have definitely contended for years to come if it was able to keep its entry going. Bell, being the great driver he is, and the increased alliance with JGR were both factors toward the team’s success. But the announcement that it would not return for 2021 killed any chances of continuing that trend upward.

Had the pandemic not happened, would LFR kept its doors open? If it did, what would 2021 look like and would it have been able to keep Bell? Could he have won in the No. 95? All these questions could have been realistic possibilities, but the money was too much for Leavine to continue operating like he was. He has been very vocal on Twitter about his displeasure for the sport and how it operated business.

The only aspect that may have changed LFR’s 2020 outcomes could have been practice time and qualifying sessions. Lack of practice for a rookie will never be a good thing, and that is what Bell had to deal with all year long. I do not think it would have magically turned him into a multiple-race winner, but some races he ran near the front could have been slightly different had he had a chance to work on the car over the weekend. This could be said about everyone, but for rookies, this seems to apply more.

For 2021, LFR sold its charter to Spire Motorsports, and Bell moves into the No. 20 for Joe Gibbs Racing. Bell will be stellar in his new ride, and Leavine will enjoy life outside of NASCAR, at least according to his Twitter page.