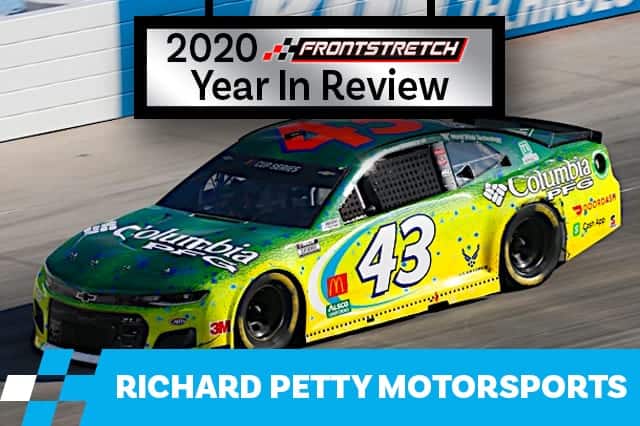 The No. 43 team, piloted by Bubba Wallace, enjoyed its most successful season since Wallace joined the team in 2018 with one top five, five top-10 finishes and a 22nd-place finish in points.

In his third full-time season in the NASCAR Cup Series, Wallace seemingly found his comfort zone. His five top 10s were a career-best, as was his points finish, while also notching 18 lead-lap finishes, another career-best that doubled his previous best of nine in 2019.

The success came in part due to a renewed pairing of Wallace and crew chief Jerry Baxter. The duo combined for five wins, 14 top fives and 25 top 10s in 43 Camping World Truck Series races in 2013-14, and their chemistry didn’t waver at the Cup level this year, as Wallace produced his most consistent season to date.

Following the season’s resumption from the 10-week COVID-19-induced hiatus, Wallace wheeled the No. 43 Chevrolet to 21st- and 16th-place finishes at Darlington Raceway, but issues at both the Coca-Cola 600 and Alsco Uniforms 500, both at Charlotte Motor Speedway, relegated Wallace to consecutive DNFs.

The team proved its resiliency in the following races, stringing together eight top-25 finishes over the following nine weeks before finishing the season with 25 such results.

But as with any season came adversity, as well as, in the case of Wallace, controversy that cannot and should not be ignored.

Wallace, NASCAR’s lone full-time Black driver across its three national touring series, chose to speak out against racial injustices in the spring following the death of George Floyd.

Together, we’re growing, and will continue to grow. pic.twitter.com/NlSlBnP4Kp

Wallace’s stance and the support from team members at Richard Petty Motorsports led to the running of a Black Lives Matter car at Martinsville in June.

The same day that car ran, NASCAR announced a permanent ban on Confederate flags, a move that followed conversations Wallace had with NASCAR executives.

Two races later, Wallace found himself further entrenched in controversy as team members noticed the rope of Wallace’s garage stall door was fashioned as a noose. The noose was noted during a Sunday rain delay and immediately condemned by NASCAR as a racist act, followed by a massive show of support toward Wallace Monday as all drivers and crew members pushed the No. 43 Chevrolet to the front of the grid.

However, an investigation by the FBI concluded the noose had been tied since at least October 2019 and was not a targeted attack against Wallace. Wallace, who had only been notified of the noose and did not see it himself, was subsequently ridiculed on social media for a hoax despite NASCAR’s initial response drawing such a definitive conclusion.

Wallace and his No. 43 team handled the backlash well and managed to focus on producing results, while Wallace’s stand for social justice brought new sponsors to the program.

In the aftermath of the controversy, companies such as DoorDash, Columbia and Cash App donned the No. 43 Chevrolet in their first forays into NASCAR sponsorship and provided critical funding for the mid-tier RPM.

While Wallace departs for 23XI Racing in 2021, Richard Petty Motorsports can reflect on 2020 as its best in the past four seasons and a step in the right direction, particularly as the team’s average finish rose to 21.1 in 2020 from 23.9 just a year ago.

Ugh, give him his participation award and let’s try to forget the day a race car had the name of a racist and violent organization on it’s side. Try to forget the so many times you heard the word noose.

Well kids, this article is just one example of what is to come. It makes Bubba out to be a driver on the rise and nothing could be further from the truth. If you think that top 25 finishes will be good enough for sponsors and MJ, just wait and see. Danica 2.0 and this article proves it.

I’m really hoping for the best for Erik Jones with RPM. He was the odd man out at JGR, as TRD continues its strong driver development program with no place to put those drivers in Cup. Until Hamlin and Truex retire there’s no room at the top.

Mmmm 40 cars start on a Sunday and if you look closely you’ll see about 15 or so that are at best field fillers. Maybe more. Nothing at all against them, this is the game Nascar created and theyre playing the game. Don’t blame them at all. I see bubba heading back towards that 28th place finish average. Unless Denny pushes him, blocks for him, let’s him pass him, or anything else he can do to help him. What a crock.