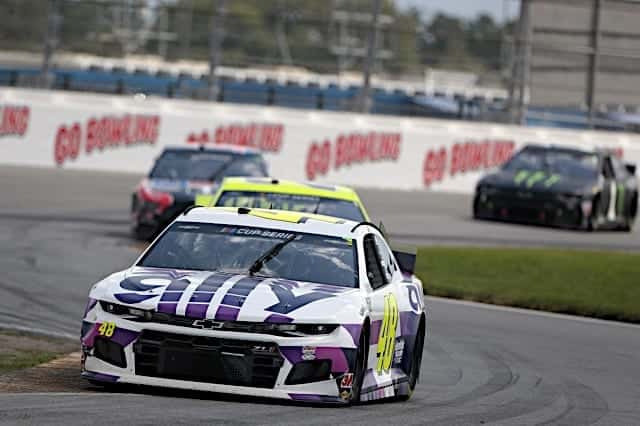 In March 2019, when the 2020 NASCAR Cup Series schedule was revealed, it brought with it a plethora of changes. Interestingly enough, the five-year sanctioning agreements NASCAR entered with the tracks only gave a two-week window, so many of the bigger changes required a compromise with those facilities in approving the changes.

The move came with mixed reviews that were once again visited at the end of the season, though one championship weekend is hardly enough to make a judgment as to whether the move was the right call, though you’ve gotta hand it to Phoenix marketing officials who put these billboards up in the area.

In Arizona? Check out these amazing billboards we have displayed throughout the city!

And yes, smoke machine and all? pic.twitter.com/j0NoNbU5nK

Meanwhile, the regular-season finale moved to Daytona International Speedway, creating the opportunity for a driver who may not normally compete for the playoffs to play spoiler. Of course, that meant a different track taking on the July 4 weekend, and Indianapolis Motor Speedway. The decision drew plenty of criticism from traditionalists who expected Daytona to always run around the holiday weekend.

For the first time in the modern era, the Cup Series scheduled a doubleheader weekend at Pocono Raceway, which scheduled back-to-back races on the same weekend. The full slate put the Tricky Triangle in a position to host five races (the  ARCA Menards, Xfinity and Camping World Truck series were also scheduled that weekend) in four days.

Other changes included a West Coast swing immediately following the season opener at Daytona that took the Cup Series to Las Vegas Motor Speedway, Auto Club Speedway and Phoenix. That change also moved Atlanta Motor Speedway back to mid-March. The spring Martinsville Speedway race was moved to Mother’s Day weekend and transformed into a night race.

Fast forward to March 2020 and so much of that changed when the COVID-19 pandemic swept the nation, forcing all of the sports to grind to a halt just before the Cup Series would have headed to Atlanta Motor Speedway. Affected by local stay-at-home orders and plenty of uncertainty surrounding the virus, the sport sat dormant for the remainder of March and the entire month of April.

At the end of April, NASCAR revealed its plans to get back on track, starting with a short jog to Darlington Raceway on May 17, followed by another race at the facility on May 20. A pair of races at Charlotte the following weekend kicked off what turned out to be a busy summer stretch. The wildcard thrown at everyone was that no practice or qualifying sessions would be held to allow for minimal contact between teams and drivers.

But despite losing a large chunk of the early part of the year, the Cup Series managed to run a full 36-race slate, though the schedule lacked visits to places like Sonoma Raceway, Watkins Glen International and Chicagoland Speedway, to name a few. It also saw the Daytona road course added, which presented a unique challenge to teams without practice or qualifying to get familiar with the track. The playoffs didn’t see any changes and ran as scheduled, though.

It wasn’t until the end of September that the 2021 schedule was revealed, and along with it came another group of changes.

Chicagoland Speedway and Kentucky Speedway were both removed from the schedule, reiterating the announcement NASCAR made the day prior. For the first time in 11 years, Atlanta will host two dates, one of which will replace the date left open by the Kentucky Speedway vacancy.

Meanwhile, for the fans who clamored for more road course racing, the 2021 schedule has just what the doctor ordered. While Sonoma, Watkins Glen and the Charlotte ROVAL remain on the schedule, Cup drivers will also take on three new challenges. For the first time, the series will run the Indianapolis road course and Circuit of the Americas in Austin, Texas. Additionally, for the first time in 60-plus years, the Cup Series is set to run at Road America for the July 4 weekend.

After hosting three races during the 2020 season, Darlington will host two dates, one of which falls on Mother’s Day weekend. The other will come in its traditional Southern 500 slot for Labor Day weekend.

On the other end of that, Texas Motor Speedway actually lost one of its points-paying races but will keep its playoff date in October. The good news for the mile-and-a-half oval is that it will host the All-Star Race weekend in June. Immediately following that weekend, the Cup Series will make its return to Nashville Superspeedway, a move that was announced in June.

Not enough excitement ahead for you? Don’t worry, because there’s more; the Cup Series is going dirt racing, too. That’s right, the half-mile bullring at Bristol will be converted to a dirt track for its spring race in late March. It will be the first time the series has raced on dirt since 1970.

Of course, all of those schedule changes are dependent upon where the country is at with the COVID-19 pandemic and what potential restrictions could force alterations. If fact, just this week, the first change has already been made. For the first time in 24 years, Auto Club Speedway will not host a race weekend, and instead, the Cup Series will remain in Daytona for a race on the road course before heading south to Homestead.

As of press time, NASCAR has not made it clear whether the intent is to run the shortened race weekends experienced during the post-pandemic shutdown.