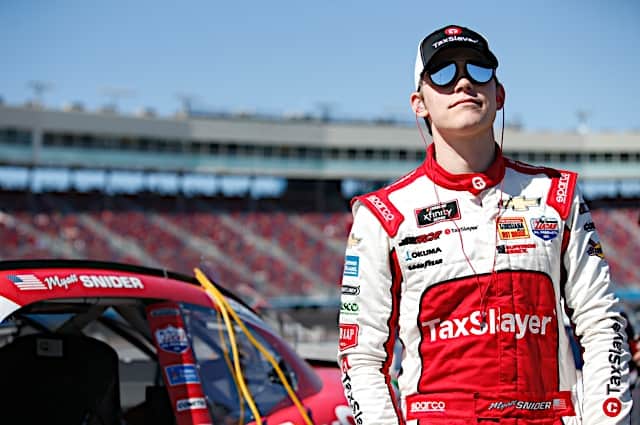 After running the full 2020 Xfinity Series season for two teams, Myatt Snider will return to one of those teams full time in 2021.

Snider will drive Richard Childress Racing’s No. 2 in the series in 2021, the team announced Dec. 10.

The effort will be sponsored by TaxSlayer.

Snider’s move to the No. 2 marks the return of the team’s car with that number, which last won a championship with Tyler Reddick in 2019 before not running in 2020.

NEWS: @TaxSlayer will continue its partnership with RCR and @MyattSnider in the 2021 @NASCAR_Xfinity Series.

The second-year RCR driver will compete full-time in the No. 2 TaxSlayer Chevrolet Camaro with returning crew chief, @AndyStreetRCR.

“I was so thankful last season to run a part-time schedule with RCR, but knowing I’m going to be racing full time now with a chance to compete for a championship in the NASCAR Xfinity Series means the world to me,” Snider said in a team release. “I can’t thank Richard Childress, everyone at RCR and ECR, my family, and TaxSlayer enough for believing in me.

“Between the quality of people and resources available to me at RCR and Chevrolet, I will have all the tools I need to succeed. I had a lot of success with the No. 2 early in my racing career, so it’s really special to have the opportunity to compete with that number again, especially with all the history it has at RCR.”

Added team owner Richard Childress, “We’re proud to be continuing our relationship with both Myatt Snider and TaxSlayer for the 2021 season. TaxSlayer is a great tax and financial company, who prides themselves on being family-focused, much like RCR. We’re looking forward to showing our fans the benefits of using TaxSlayer, as we approach both the racing season and tax season. I know that Myatt will do a great job representing both TaxSlayer and RCR on and off the racetrack.”

In 2020, his rookie Xfinity season, Snider scored two top fives and six top 10s while driving for RCR and RSS Racing, the latter of which eventually transferred the operation of its No. 93 to Reaume Brothers Racing during the season.

RCR has not yet named a driver for its No. 21, which ran full time in 2020 with a variety of drivers, including Snider, Anthony Alfredo, Kaz Grala and Earl Bamber. The release did not note if the No. 21 has become the No. 2 for 2021.