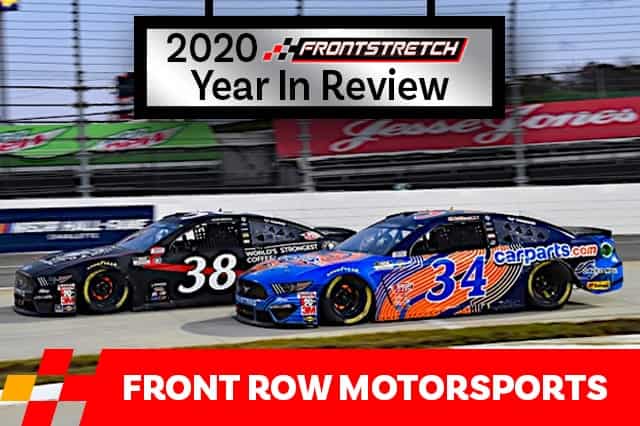 Michael McDowell returned to the team for the third season to pilot the No. 34 Ford. The team signed John Hunter Nemechek to drive the No. 38 Ford in his rookie season. Nemechek previously drove the final three races of the 2019 season with the team, running well enough for some to debate whether he deserved the ride full-time.

The change from three Cup teams to two paid dividends, as McDowell finished 23rd in the championship standings and rookie Nemechek finished 27th. In addition, FRM partnered with Rick Ware Racing to field David Ragan in the Daytona 500, where he finished fourth.

Both McDowell and Nemechek made headlines, albeit not always for good reasons.

McDowell clashed with Bubba Wallace during the NASCAR All-Star Race Open. On lap 17 of the event, McDowell wrecked Wallace, ending Wallace’s day and damaging McDowell’s No. 34, subsequently costing him a shot of advancing to the All-Star Race.

While the competition there was only an exhibition race, it made headlines, the second-biggest highlight of the day behind Chase Elliott‘s All-Star victory.

In the points-paying races, McDowell scored a career-high four top-10 finishes: at the first race of the Pocono Raceway doubleheader, Indianapolis Motor Speedway, the inaugural Cup race at the Daytona International Speedway road course and the playoff race at Bristol Motor Speedway.

On top of his most top 10s, McDowell finished a career-best 23rd in the championship standings due to a best average finishing position of 20.9.

His eighth-place finish at the Tricky Triangle was his second top 10 finish at a track other than Daytona or Talladega Superspeedway.

Known as a talented road course driver, as his lone Xfinity Series victory occurred at Road America, McDowell gained 20 spots from his 30th place starting position to finish in 10th place at the Daytona road course.

In 2021, with the announcement of the Daytona road course added to the schedule, the Cup Series will race seven times on road courses, six in the regular season and one in the playoffs. McDowell will be eager to make both left- and right-hand turns in nearly 20% of the season (seven out of 36).

We know this guy is excited about more road courses. What about you? pic.twitter.com/sFBxdWLUYJ

If McDowell returns to FRM next year, he will be gunning for his first career win. All it takes is one win for him to make the playoffs. FRM has only made the playoffs once and only has two wins in its history.

Nemechek showcased his skills in his Cup rookie season. He tied McDowell as the highest-running FRM driver at 18 times apiece. Nemechek averaged a lower running finishing position of 22.4, but he too notched three top 10s, earning respect driving the No. 38.

More importantly, FRM secured more sponsorship for him from several companies, including Speedy Cash, which adorned his No. 38 in a slick paint scheme.

Yesterday’s race at @kansasspeedway was the last primary race of 2020 for @speedycash aboard @JHNemechek’s No. 38.

They will still be an associate partner on both of our cars throughout the remainder of the season and we would like to say “thank you” for all of their support! pic.twitter.com/aqTdnQJHxm

On the track, Nemechek gained notice as a driver to be reckoned with when NASCAR returned following its hiatus due to the COVID-19 pandemic.

The first race back occurred at Darlington Raceway, and there were no practice nor qualifying sessions. The change did not hurt Nemechek. After starting 34th, he avoided any involvement in the 10 caution flag periods to drive his way up to a ninth-place finish, his first-career Cup top 10.

In his first Cup start at Talladega, Nemechek scored an eighth-place finish, which became his career-best, a stat that holds to this day.

This is also his best finish to date at the Cup level. Well done, wheelman! ? pic.twitter.com/26jM5USF5O

In the playoff race at Talladega later in the season, Nemechek also finished eighth.

Yes, there were struggles for the son of fellow NASCAR driver Joe Nemechek, such as back-to-back 36th-place finishes in the races at New Hampshire Motor Speedway and the first race of the Michigan International Speedway doubleheader. But it still came as a surprise when he decided to leave the team after this season.

“I’m so thankful for the chance that Bob Jenkins, Jerry Freeze and all our partners took on myself this past season,” Nemechek said in a departing statement. “I would like to thank every employee for the opportunity and the hard work that they put into myself and the No. 38 team at Front Row Motorsports. I am grateful for my time, relationships and all the knowledge I have gained. I appreciate the patience of our fans, with future to be announced at a later date.”

Nemechek then announced he will drive the No. 4 Kyle Busch Motorsports Toyota in the Camping World Truck Series next year, returning to the Truck Series as he already has 102 starts and six wins.

As of press time, Front Row Motorsports has not officially announced its driver lineup for next year.