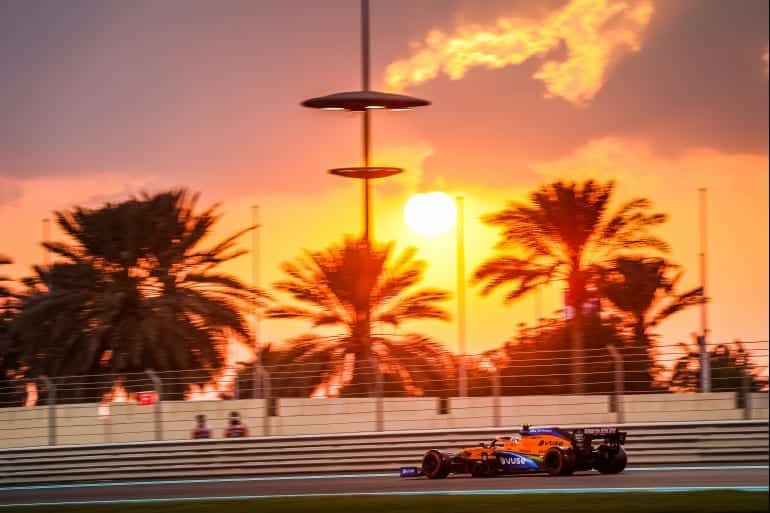 Sitting ten points behind third-place rival Racing Point, the McLaren team looked like a long shot to make its way to third in the constructor’s standings.  Racing Point had claimed victory with Sergio Perez at the Sakhir Grand Prix the previous week and its cars had been strong all year.  Even if Perez were starting from the rear, he was still a threat to get in the points.

Things played out perfectly for McLaren.  Both of their drivers made clean getaways at the start, managed their positions well, and Lando Norris earned a fifth-place result with his teammate Carlos Sainz sitting right behind in sixth.

With the points earned from those finishes, McLaren leaped Racing Point and took third, 202 – 195.  The third-place finish was vital for the Woking organization.

After years of listless performance and underwhelming results, McLaren has shown that they are charging back to the front of the grid.  Well, sort of.

The team claimed just two podium finishes all season, which looks good at the start but when weighed against the unpredictability of some of the races looks like the team failed to capitalize on some opportunities.

That 2020 brought two first-time winners with Pierre Gasly and Sergio Perez, indicates that chances presented themselves.

To give a better understanding of the podium finishes, the statistics below show the 2020 podium distribution by team

That Mercedes earned such lofty results, with 25 podiums is not a surprise.  Even Red Bull’s podiums come as no shock as it was the second-best team on the grid all season long.  But the drop off to the rest of the field from the top two is stunning.  Consider that Ferrari, which put together a disaster of the season by taking sixth, and 71 points behind McLaren, earned three podiums.  Renault, which finished in fifth and 21 points behind McLaren, managed three.

While losing Sainz to Ferrari was a blow to the team when the announcement came, the organization moved quickly to sign Daniel Ricciardo and the Australian-born driver looks set to return to the results he had when with Red Bull.

For Sainz, the move may look distressing.  Every driver jumps at the chance to drive for Ferrari, but the Maranello organization has been a mess for a few years now and there is little to believe that they are close to fighting for wins.

Rather than divert into a piece that looks at how Ferrari is completely mismanaged, it is best to return to McLaren and its sense of direction.

From 1998 to 2012, McLaren was one of the best teams on the grid.  The team finished in the top three in 13 of those years, with a fifth place in 2004 and exclusion in 2007.  They won races in every year except for the jumbled drivers mess of 2006, when Juan Pablo Montoya and the team parted ways midway through the season.

The team expects success and found it through each decade of its existence–save for the 2010s.  Beginning in 2013, McLaren turned into a middling team.  The team’s lead engineer, Adrian Newey’s move to Red Bull in 2006 looks to have been the start of the slide into irrelevance.

Red Bull took off afterward, taking first from 2010 to 2014 and the team have hovered in the top three ever since.

But since the introduction of the hybrid engine in 2014, McLaren has fallen back.

The ninth-place finishes are deplorable but also an indication of the resurrection project that McLaren became.

A number of elements factor into the downslide.  The former CEO of McLaren during its heyday, returned but he was unable to rekindle the touch needed to keep the team at the front.  Lewis Hamilton’s leaving for Mercedes after 2012 created a different issue as the team failed to find anyone as dynamic as the champion driver.

When the team signed Fernando Alonso, for the 2015 season, fixing one problem, they also made the switch to the unproven Honda engine.  Honda had not been in F1 for years and their return proved difficult.  Though thought to have one of the best handling cars on the grid, their cars lacked speed and the Honda power units often turned out to be unreliable.

The three years with Honda were a struggle and the team broke with the Japanese company to partner with Renault in 2018.  In 2019, the team appointed Andreas Seidl as team principal, a year after Zak Brown ascended to become head of McLaren racing.  These two have stabilized leadership within the organization and the team looks strong.

There is reason to believe that what Brown and Seidl have developed will bring wins next season as the team will be switching from Renault to Mercedes engines.  Bringing Ricciardo on board will make for a stellar pairing of drivers with Norris remaining with McLaren.

The third-place finish looks like it was a long time coming, as though McLaren had driven off track and toiled to get all four wheels back on the pavement.  But it looks like they are back and pointed in the right direction and the front wheels are in alignment.

The two podiums McLaren earned this year should be a mark they pass in the first few races of 2021.